We are all Kim Wexler, part 2: "Better Call Saul" finale taps our love affair with grifters 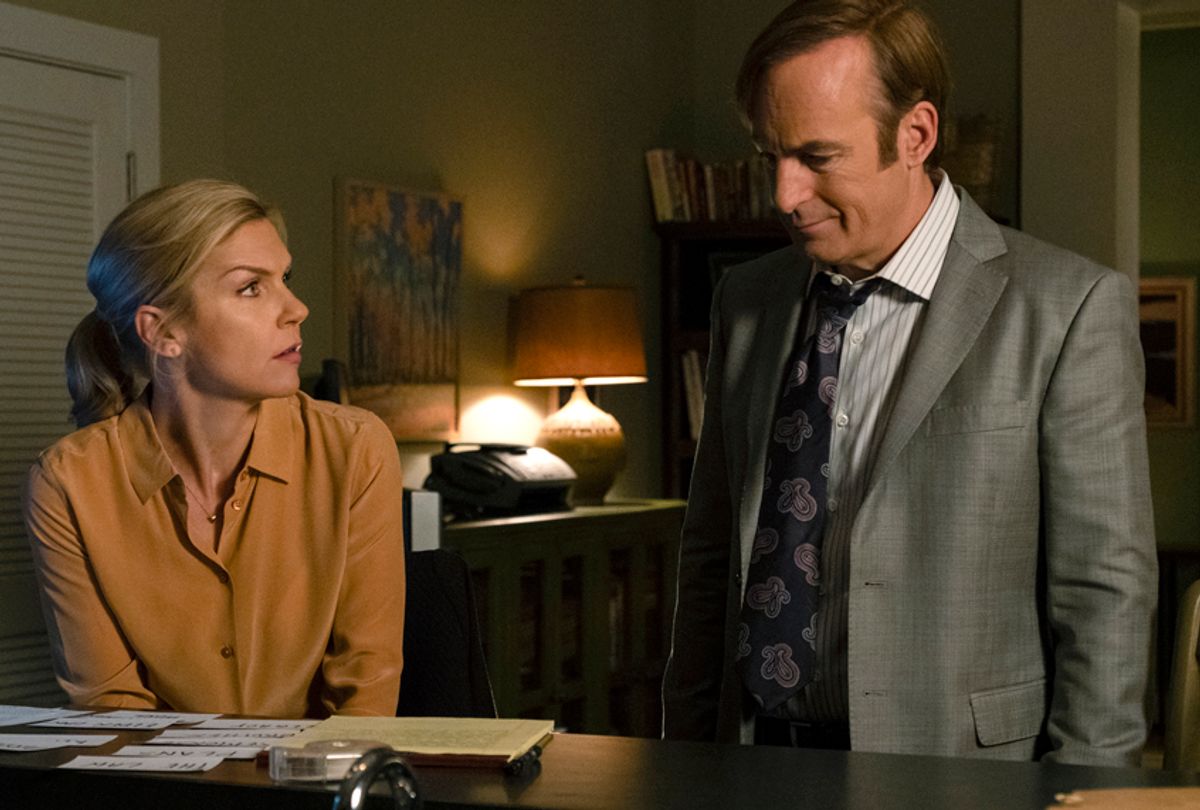 America truly, madly, deeply loves winners, often to the point that we celebrate their gloating. Winning is the apex of our aspirations, the champion's goal. Winning brings us everything we've ever wanted, and we want to win so much that we get bored of all the winning.

By extension, America is easily seduced by grifters. This has been true since P.T. Barnum commercialized hokum and transformed con artistry into entertainment — long before that, truly. This truth drives "Better Call Saul" and Vince Gilligan and Peter Gould's marvelous, terrifying creation, the character born as Jimmy McGill. Bob Odenkirk's Jimmy is not a looker; he doesn't drive a fancy car or wear tailored suits.

Time after time we witness Jimmy fall back on what he knows best about humanity: that we are gullible, greedy beasts easily taken in by deals too good to be true. This helps him succeed beyond the expectations most people have for him, but also earns him a few beat-downs — physical ones, especially during the recently ended fourth season.

Always Jimmy's sympathetic friend Kim Wexler (Rhea Seehorn) stands by him, at points helping him bamboozle his way past barriers standing between him and the official reinstatement of his attorney's license. Kim sees the good in Jimmy, as does the audience. "Better Call Saul" exists on the promise that the title's criminal will emerge some day, but its appeal is in illustrating Jimmy McGill's virtues before showing them die off, one by one, thanks in no small part to the vindictiveness of his late brother Chuck (Michael McKean).

Indeed, Chuck secretly devoted much of his adulthood to making sure that Jimmy would never get a break, let alone a clean slate, thereby ensuring Jimmy would never stand beside Chuck and his peers in the Winners' Circle.

Nevertheless, Jimmy charms his way through life, even when the odds are stacked against him, and especially when his adversaries are set on making him pay. Season 4 of "Better Call Saul" spent nine hours empathizing with Jimmy's plight — one of his own making, but tragic and relatable. The fourth season starts with Jimmy in a place of mourning, but it also shows the ways Chuck continues to haunt him. Chuck's reputation made Jimmy wanted to be a better person, to make his brother proud. But Chuck's petty flexing of power forced Jimmy to always fight dirty.

Thus, in the last scene of Monday's finale ( appropriately titled "Winner") when Jimmy reveals that his display of contrition was so expertly executed even his confidante felt conned, it felt slightly sickening.

Part of any pit-of-the-stomach twisting one might feel may be owed to the (un?)fortunate timing of the finale's airing. "Winner" arrived days after the finale of another long con decades in the offing, pushed over the finish line by collaborators more obsessed with victory than with doing the right thing.

In their tone-deafness, they are tweeting pictures of full champagne glasses — and beers — celebrating the fact that they got one over on trauma survivors. Even after an assault victim publicly put her life, her livelihood and her family in mortal danger in her attempt to slow down a speeding train that chewed her up in front of our eyes, they're high-fiving in the hallways. Justice will be served, their way.  It's all good, man.

And once again, "Better Call Saul" employs Kim, who holds the faith for Jimmy even after enduring some of his worst behavior, to represent us.

In season 4's penultimate episode, Jimmy uses her as a whipping post when he can't direct his fury at the forces beating him down, accusing her of celebrating his defeat just like the rest of the world. Despite checking all the boxes, despite preparing for a hearing before a committee that would help decide his fate, he's unable to convince them that his contrition is genuine, no matter how earnest his efforts are.

Thus, Kim helps him build another con before his final appearance before the appeals board, one that plays into the hand that's been played against Jimmy, all along. They make it all about Chuck.

Kim waits for Jimmy as he pretends to weep at Chuck's grave on the anniversary of his death, leaning on a headstone paid for by his law partners as two influential attorneys stop by to pay their respects. Kim backs up his act when he hosts a reception for a reading room named for Chuck, for which he paid $23,000.

At last, she accompanies him to the last hearing, advising him that his success hinges upon more than just the words of his statement, which he decides will be a reading of the letter Chuck left for Jimmy to receive after his death. "It's how you read them," she says.

When Jimmy stands before the group that has the final say on his reinstatement, he speaks from the heart and begins reciting the letter. Then, after a few moments of reading the room, he halts.

Acknowledging the board's enduring respect for Chuck, even after his death, he chokes his way through a speech he claims is impromptu, in which he admits he may never be the great man Chuck was. But, he says, he pledges to devote his life to keep on trying to live up to the standards of Charles McGill, because he was always right.

Only when they get out into the hallway and Jimmy's mood takes a whiplash-inducing shift to a victorious crowing about having pulled one over on the suckers does Kim visibly balk, realizing she too has been hoodwinked. Possibly, she realizes to her horror, she may have been as much of a rube as everyone else this entire time.

Kim freezes up in horror, but Jimmy's too busy gloating to notice — so much winning!

It is then that an administrator finds Jimmy, explaining she would get him the necessary paperwork to get his license reinstated, and Jimmy reveals in front of his partner that he will no longer be doing business as Jimmy McGill. Coolly grinning, he points two confident fingers her way utters the phrase that's been a longtime coming: "S'all good, man."

The entirety of "Better Call Saul" is a long game, one extended bridge connecting a past that pre-dates its first episode to "Breaking Bad," and miserable colorless future awaiting Jimmy. From the start Gilligan and Gould have styled "Better Call Saul" as a parable of moral degeneration and compromise.

Jimmy is a living demonstration of how a lifetime of slights and thwarted opportunities can steer a flawed human being down evil paths from which there can be no turning back. If the world designates someone to be a loser, his story posits, the only way to win is to transform that expectation into victory by any means necessary. "Winner" sets up this conclusion in the cold open, with a flashback to Chuck's vouching for Jimmy before the Bar Association, and later on joining him on a karaoke stage, albeit reluctantly, for a duet of Abba's "The Winner Takes It All."

Those lyrics tell the whole story, both Jimmy's and our own, circa October 2018.

Midway through the finale, Jimmy says as much to a failed applicant for a scholarship Chuck's law firm establishes in his name, a young woman they dismissed outright due to a shoplifting charge on her record.

Jimmy tracks the woman down as she is leaving and gives her the bad news: straight up, no chaser. Then he gets even more brazen, telling her people are never going to give her a break. Her only response, Jimmy advises, is to do what they won't do. That is, be smart, cut corners and win. The higher she rises, the more they'll hate her for it, Jimmy says. So rub their noses in it. Make them suffer. The winner takes it all.  "You understand what I'm trying to tell you, right?"

We sure do. Loud and clear.