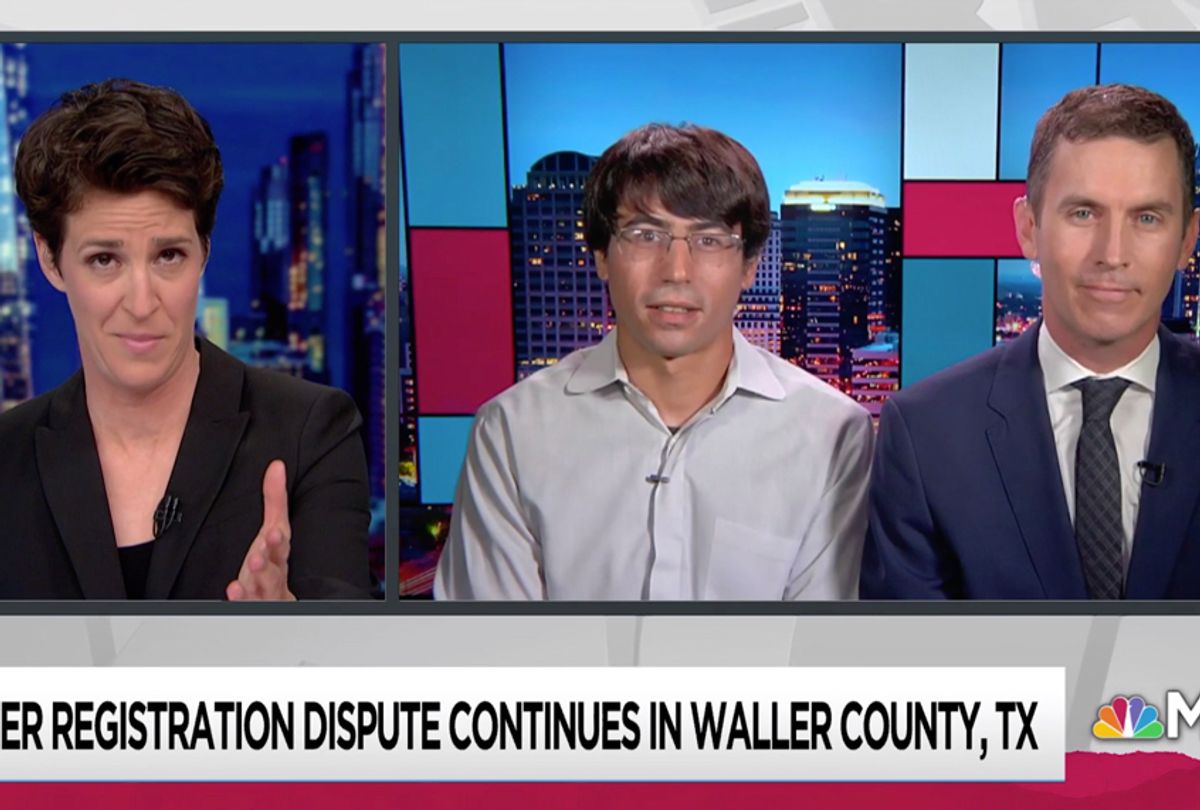 A field director for Texas Democratic congressional candidate Mike Siegel was arrested after he delivered a letter demanding that Waller County update the registration status of thousands of students at a nearby college whose eligibility to vote this November was thrown in flux the day before.

"It made me reflect on what people in that county deal with on a day-to-day, year-to-year basis," he continued.

Aronowitz delivered the letter of support on Siegel's behalf. He told Maddow he was released after two hours. According The Houston Chronicle, the letter, addressed to County Judge Trey Duhon and Elections Administration Christy Eason, criticized Eason's decision to require students, who are predominantly black, to fill out a "change in address" form to fix a registration issue — a decision Siegel told Maddow was announced only two weeks before the voter registration deadline.

Aronowitz was arrested after he took a photograph of a county clerk receiving the letter. Siegel told the newspaper that Aronowitz took the picture to confirm the letter had been received, the newspaper wrote. Siegel said the clerk objected to having her picture taken and complained to a nearby bailiff.

"At first I thought it was a joke that they were just going to ask him a couple of questions and let him go but as it continued further and further and more and more law enforcement officials arrived — I think by the end Jacob was surrounded by 7 or more deputies and police officers — I realized we are in a different place," Siegel, an attorney who was on the phone with Aronowitz while he was being held, said. "I'm lucky enough to live in Austin, Texas, and we don't face this kind of oppression on a day-to-day basis."

"The idea that a simple taking of a picture of delivering of a letter would end up being kept in custody for a few hours — they put their hands on Jacob, they wouldn't let him go, they threatened to him for multiple days. I was horrified that they would do that," Siegel continued.

The letter's signees allege the action is "appropriate" because the county "advised students to use 100 or 700 University as their 'Residence Address' despite knowing that those students actually resided on campus, in precinct 309."

"It was the actions of the County which led to students being registered in the wrong precinct," the letter says. "Therefore, the County should take immediate steps to correct the effort resulting from its action…"

Aronowitz's arrest comes one day after thousands of students on the nearby campus of Prairie View A&M University discovered they could have registered under the wrong address, putting their voter registrations in question. Tuesday was the last day to register to be able to cast a ballot in the midterm elections this November.

The Houston Chronicle explains how the problem stems from how students get their mail:

The mix-up stems partly from how students get their mail: Because the university does not have individual mailboxes for students on campus, it provides a single post office box for every student.

In 2016, a group of university officials, the county and the local political parties agreed to have students write down 700 or 100 University Drive as their residence when registering to vote. One of the addresses is for the university, the other for the campus bookstore.

In the March primary election, however, Eason noticed the 700 University Drive address puts students in the City Hall precinct, not the one on campus. The officials decided to let students vote at the wrong polling place — the one on campus — but required them to fill out a change in address form. Eason said this would allow the county to ensure the students are sent to the right precinct in future elections.

Waller County Democratic Club President and County Judge candidate Denise Mattox said she worried the statement cards will cause too much confusion.

Siegel, who is running against Republican Rep. Michael McCaul in a district that President Donald Trump handily won in 2016, said the arrest constituted "an abuse of power."

"There was no reason to arrest or detain (Aronowitz)," he said.

In a 1979 case that reached the U.S. Supreme Court, Prairie View students secured the right to vote on the college campus without filling out a residency questionnaire.

"We're hopeful that through shining a light on this issue that we can achieve the objective that is having all of the students' voting status restored and taking away this impediment, where they're being asked to fill out additional papers, which will, of course, lengthen the wait for voting and will discourage some students from voting," Siegel told Maddow on MSNBC.