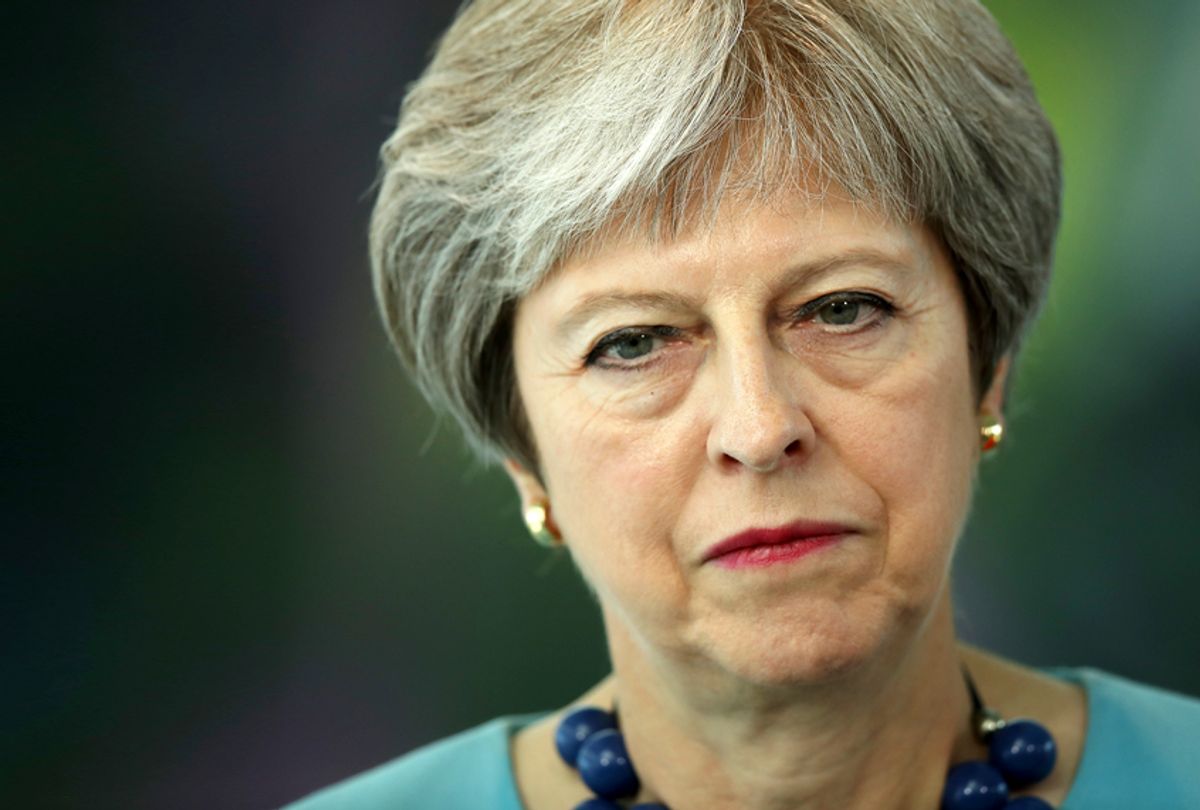 With fewer than 200 days until Brexit and still no path to a U.K.-EU deal, Britain is losing its mind in real time. The country will formally leave the EU on March 29, 2019, however it has not reached any agreements with the EU on the economic, market access, and legal relationships to replace those that currently exist. As a result, Brexit threatens Britain’s most significant economic institution — the role of London as the financial capital of Europe.

Britain has a distinguished history of revolutions, from the 1688 Glorious Revolution that created Britain’s constitutional monarchy to the 1776 American Revolution that forced a fundamental rethinking of the British Empire. Today Britain is undertaking an Atavistic Revolution, an aggressive reversion to an idealized ancestral past.

Many older English people fondly remember a time when British power rested on balancing its role between Europe, the United States, and the Commonwealth and it is they who provided the winning margin for the proponents of Leave during the Brexit referendum. But the reality is far less rose-tinted — the looming exit of Britain from the EU will damage Britain domestically. Furthermore, by discarding London’s role as Europe’s financial center, Brexit threatens to disrupt a critical international institution of tremendous value. What is occurring is a disturbing example of national illusions superseding global economic and social realities.

The City of London has been an historic leader in global financial activity. Known as the Square Mile, it is the home to the Bank of England, the world’s second oldest central bank (created in 1694) and the model for most central banks thereafter. The classical gold standard was also created in London: in 1717, having traded physics for politics, Sir Isaac Newton issued an historic report as Master of the Royal Mint, which set Britain’s domestic value of gold for 214 years and later became the lynchpin of the international gold standard. And on October 27th, 1986, Prime Minister Margaret Thatcher inaugurated the Big Bang, a fundamental deregulation of U.K. financial markets that catapulted London to its current elite status among global financial centers.

Britain is already beginning to feel the Brexit Bite. In 2018 New York overtook London as the world’s most attractive financial center. £9 billion ($11.8 billion) in investments have been withdrawn from U.K. companies since the Brexit referendum, with investors fearing for Britain’s future.

In the past few weeks, Brexit’s possible consequences have become more urgent, volatile, and dangerous. At the September 20th Salzburg Summit, the EU bluntly rejected U.K. Prime Minister Theresa May’s proposed “Chequers” pathway to Brexit. This led to an angry U.K. Conservative Party Conference where Ms. May’s own position was under serious threat by the anti-EU wing of her party. Though accusations were hurled back and forth across the English Channel, there appears to be no clear path to an agreement, raising the real possibility of a no-deal Brexit.

While Brexit inherently threatens the U.K. economy, a no-deal Brexit would be Armageddon. With no deal, Britain would leave the EU with no agreements on the movement of goods, services, capital, and people between them, when there had previously been free movement of all four. This would be a logistical and governmental disaster for both sides, while Britain would still have to pay £39 billion ($51.3 billion) as a divorce payment to the EU.

The loss of London as Europe’s financial capital will be an economic, industrial, and corporate calamity for Britain. London’s financial sector creates nearly 10 percent of Britain’s total economic output and employs over 2.3 million people, two-thirds of them outside London.

One study estimated that a hard Brexit, where U.K.-based banks lost privileged EU access, would expel some 31,000-35,000 financial services jobs from the U.K., 12,000-17,000 in wholesale banking. It further estimated it would cost the banking industry $30-50 billion in extra capital to create new European banks, representing 15-30 percent of total current European spending on banks, and increase annual costs by 2-4 percent annually, or $1 billion per year. And while these huge numbers refer a no-deal Brexit, right now there is no deal. Even a managed Brexit would cost Britain an estimated 20,000 finance jobs and $2.6 billion in lost annual tax revenue.

Brexit would deeply affect the EU and U.S. financial firms as well: 78 percent of the EU’s capital market activity takes place in the U.K. and 87 percent of U.S. investment banks’ EU staff work in Britain. Finance is Britain’s largest taxpayer and its biggest exporting industry.

It also poses an incredible structural risk for Europe’s financial industry. London is the global center for clearing euro-denominated derivatives, which balances the risks of futures contracts. London’s three clearing houses (LCH, ICE Clear Europe and LME Clear) process over $450 trillion in global interest rate, credit, foreign exchange and metals-related swaps. The Bank of England just warned that up to £41 trillion ($54.2 trillion) of derivatives maturing after Brexit are at risk in a no-deal scenario. Clearing houses must give clients three months to settle their contracts, which means that to avoid a Brexit breakdown, there must be a U.K.-EU agreement by Christmas. But again, there is no plan. In March 2019, such clearing operations could become technically illegal for EU firms and many institutions are already considering moving their derivatives businesses out of London to the Continent. This move will likely force other financial industries to accompany them out of Britain, having a savage industrial effect on London.

Lastly, Brexit threatens to politically and economically destabilize the EU. Britain generally paid more into the EU annual budget than it received back: in 2017, Britain’s net financial contribution to the EU reached £8.9 billion ($11.7 billion). Going forward, the EU will have to replace that money in higher taxes and greater individual burdens for larger members or reduce its spending. This fiscal crunch, married with fundamental disagreements about the bases of civil societies, authoritarianism, and corruption, may lead to the wealthier western European governments reducing EU funds to central and eastern European members.

All of this chaos is the result of a single proactive decision: to hold a Brexit referendum. This decision was taken by Conservative Prime Minister David Cameron and his party to fend off in the 2015 general election the fringe U.K. Independence Party, whose raison d’etre was to withdraw Britain from Europe. This fateful decision still haunts the Conservative Party, a party riven over Europe, unable to agree on Brexit and thus unable to move on from it.

This stems from a paradoxical and exquisitely British characteristic — the desire to be of Europe but not in Europe. Marrying the wish to belong and the right of independence is a distinctive trait of Britain’s attitude towards the European experiment. In 1949, Winston Churchill demanded the inclusion of Germany in any future pan-European effort, but his view of Britain’s role was clear: “We are with Europe but not of it. We are linked but not comprised.” Decades later, Margaret Thatcher was open in her contempt for Brussels and its bureaucrats but by signing the 1986 Single European Act, she took Britain more deeply into Europe than it had ever been before.

The ability to hold these two competing ideas simultaneously came to an end on June 23rd, 2016, when the Brexit referendum placed the decision in the hands of the British people. Since that moment, the British government has tried to fudge its exit as it fudged its EU membership, keeping what it wanted but rejecting the rest. But now the fudge is unpalatable, there is no agreement on what should come next, and Britain drifts helplessly toward a no-deal Brexit.
In 1949, British Ministry of Defense adviser Sir Henry Tizard elaborated a savage truth that plagues Britain to this day. “We are not a Great Power and never will be again. We are a great nation, but if we continue to behave like a Great Power we shall soon cease to be a great nation.” Some seventy years later, Brexit was pursued under the passionate illusion that Britain remained a Great Power, and its dysfunctional implementation may well end Britain’s standing as a great nation. That is the terrible irony of Britain’s Atavistic Revolution.