It's a great art-world paradox: resale value, prestige and cache are now far greater than the initial $1.4 million 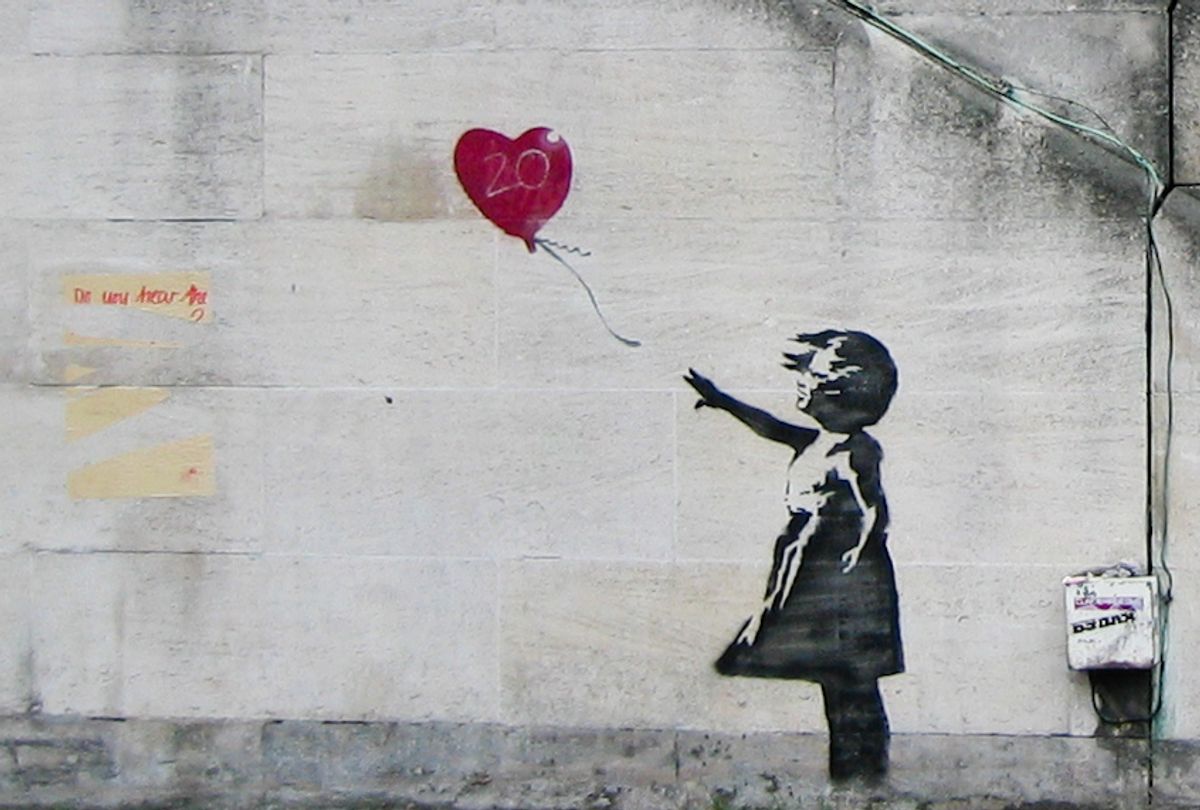 The original version of "Girl With Balloon" by Banksy. A framed print of the mural shredded itself after being auctioned for $1.4 million dollars. (Wikiart)
--

Whether you consider his latest headline-grabber to be a great work of performance art in absentia, a prank sticking a middle finger up at the art world, a brilliant piece of publicity or all of the above, there is no denying that Banksy is having the most fun of any artist, perhaps in history. We have examined his identity, almost certainly one half of the famous musical act Massive Attack, in a past column, and he is known for his graffiti art, his tongue-in-cheek sleights of hand (consider his documentary entitled "Exit Through the Gift Shop"), and his recent large-scale installation, "Dismaland," a functional horrifying worst-amusement-park-ever conceptual work that is unique in its scale and interactive three-dimensional satire. His latest is a doozy, but it is also a completely brilliant way to quickly and artificially inflate the value of his own art, though any psychologist studying him would be quick to say that he is in it not for the money but for the laughs.

For anyone who missed it, at a recent Sotheby’s auction, a spray painting by Banksy entitled "Girl with Balloon" was sold for a record-tying $1.4 million. As soon as the hammer fell, an alarm sounded within the gilded frame of the painting and it began to shred, dropping slowly down through a shredder that was hidden within the frame of the print that was a displayed on the wall in the auction room. The newly-purchased painting was thus sliced into dozens of vertical stripes as it floated to the ground.

The first thought was that this destroyed an object that had just been purchased for seven figures. What had the buyer acquired and would he be forced to pay for it? It was designed to self-destruct and it was, of course, the artist who arranged it (he sent the first Instagram of it happening). Was he making fun of the market for his own work? On the one hand yes, but on the other hand, he was doing the buyer a great favor. Works of art that are the subject of controversy, especially those stolen or attacked, see a sharp rise in value, thanks to the notoriety and media emerging from such misadventures. People who otherwise have no interest in art in general, or this artist in particular, will suddenly know all about it, thereby attracting the interest of potential buyers who might not otherwise have entered the fray, and highlighting this particular work as of enough interest to spark the attention of criminals or evil doers and, subsequently, the media. Historically, there is a direct correlation between media reports about the high values for which art sells at auction and criminals trying to target those very same works or works by the same artist. Media fuels both criminal and popular interest.

Banksy knows this very well, and so it is no surprise that various art trade talking heads, when interviewed after this event, said that the shredding of the work made its value at least double. But Banksy was doing something that has not been discussed yet, and that is transforming a spray-painting, which Banksy makes by simply spraying through a stencil, and for which there are multiple versions of any one painting (making it effectively more like a print than a one-off painting in the traditional sense), into a unique work.

By definition, works that appear as multiples in a series are of less value than unique works, because they are less rare — there are X number of them, instead of just one. This makes them more affordable, which can spread notoriety, as was the case with Albrecht Durer who, during the Renaissance, focused on printmaking, trademarking his monogram signature, and used the portability and affordability of prints to become Europe's most famous artist at a time when Raphael and Leonardo and Titian and Michelangelo were vying for that title. Banksy’s popularity for the general public is down to his witty graffiti art and the game with his identity, but he is a darling of mid-level collectors precisely because of his affordability. People of moderate wealth who wish to buy into trendy art can afford a Banksy (his paintings, like this one, are usually sold in the mid-six figures, and his prints sell for the low five figures, which is a very reasonable amount of money, in high-end art terms). And so making prints and multiple spray-paintings allows for a democratization and enhanced quantity of potential collectors.

But Banksy did something brilliant with his shredder gag. He transformed a spray-painting, which is so easily and inexpensively produced with a simple stencil and a can of spray paint, essentially costing him nothing in terms of time and raw material, into a unique work. He did so through a work of performance art. He was in the audience at the auction house and he designed the action, so while he did not make his presence known to those in the room, he was the actor in his own dramatic moment. Performance art is only enjoyed by those physically there to see it. But it can leave traces, like photographs and videos and written or spoken accounts by eyewitnesses. It can also leave relics that collectors love to snap up. In this case, the “relic,” the painting in question, was purchased seconds before the performance began. Thus the value of the work is increased in three distinct ways: What was once just one of a series of spray-paintings became a unique work, the only one in shreds. The spray-painting also became the primary relic of a singular performance. And it was effectively “attacked,” though the attack was planned and carried out by the artist himself, making it the target of the sort of (usually criminal) activity that the media loves to report on.

Presumably, the owner of this newly-shredded, newly-purchased painting took possession of the shredder frame and the dozens of long vertical slices that now represent the carcass of the work and will reassemble them into a unique work by one of the hottest artists in the world. Its resale value, prestige and cache are now tremendous and far greater than the painting alone. It seems probable that Sotheby’s was in on the gag, seeing as this was the last lot in the auction (it would have disturbed proceedings unpleasantly had it not been the last lot sold), and I’d say good for them for having a sense of humor, too often lacking in the art trade.

What appeared at first to be a tongue-in-cheek mocking prank, and then which also appeared to be a very clever publicity stunt, and then appeared to be a disaster for the buyer, is actually a clever way to immediately transform a painting that probably less than $25 to produce and a few hundred to frame, and which sold for $1.4 million, into a work now worth many times that thanks to a most singular destructive intervention.