The U.S. economy swoons on the lip of the global debt canyon

Promises, rickety scaffolds and sleight of hand won't bolster the global economy, only real growth will 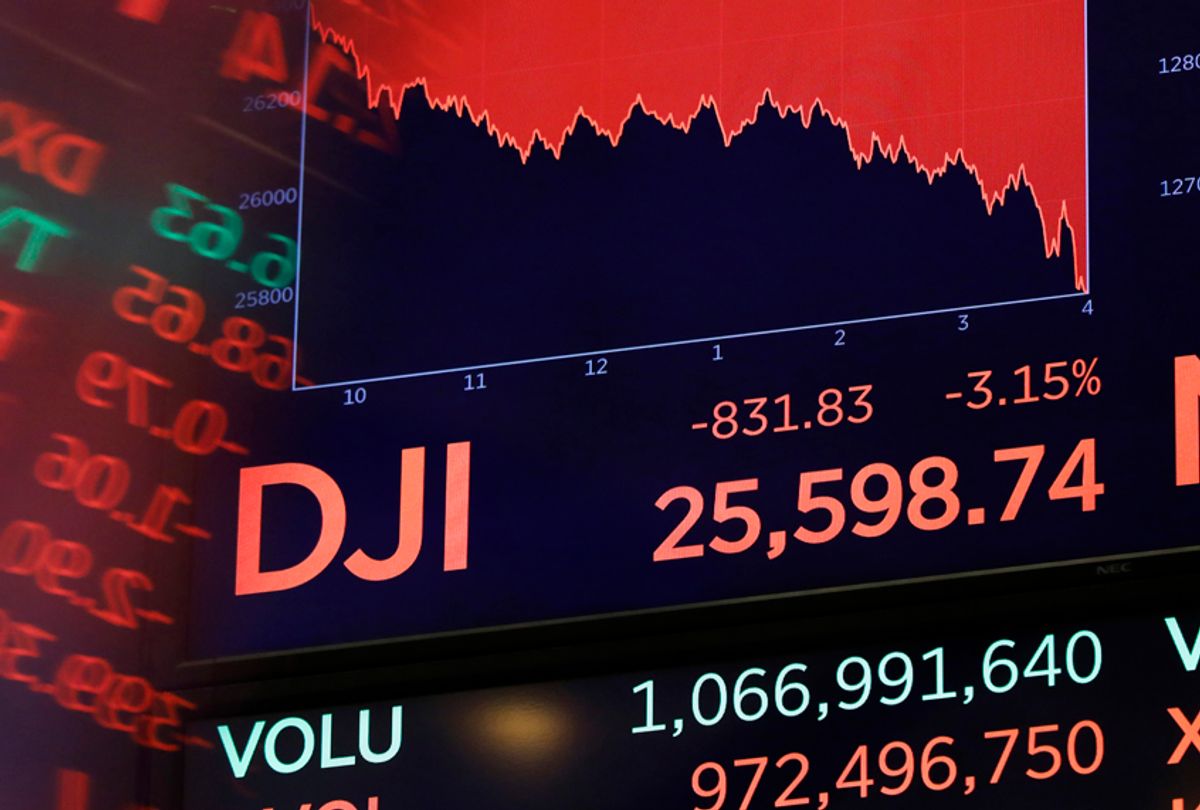 A screen above the floor of the New York Stock Exchange shows the closing number of the Dow Jones industrial average. (AP/Richard Drew)
--

Fear and greed were on display this week with the global sell-off of stocks. To get a sense of just how much wealth was destroyed in the panic consider that Amazon CEO Jeff Bezos , who also owns the Washington Post, lost $9.08 billion on just Wednesday, bringing his wealth down to $145 billion.

So, what spooked the markets?

A sell-off in the bond market that was sparked by the growing realization among investors that there is likely to be an economic slowdown as a consequence of the Federal Reserve raising interest rates after almost a decade of keeping them artificially low to ease the U.S. out of the Great Recession.

This so called “quantitative easing” is when a central bank, like the Federal Reserve, buys government securities to keep interest rates artificially low, while increasing the money supply and in the process floods financial institutions with liquidity to spark increased lending.

This “quantitative easing” strategy was also used by the Bank of England and the European Central Bank.

Of course, the other side of the transaction of lending is borrowing.  In the process of all of this “easing” the developed and emerging markets took on massive amounts of debt which all seemed to be predicated on either low interest rates forever, or the creation of real economic growth that could then pay down the debt.

Sufficient economic growth didn’t happen. So, that debt is still hanging out there and it has been growing.

Back in October of 2016, the International Monetary Fund sounded the alarm that the planet’s governments had to confront a record $152 trillion pile of debt before it sparked a financial and economic meltdown.

Without prompt attention the IMF warned of “a repeat of the damaging events that began with the collapse of the US subprime housing bubble almost a decade ago,” the Guardian reported.

Using as a benchmark its half-yearly fiscal monitoring of 113 countries the IMF reported “that debt was currently 225 percent of global GDP, with the private sector responsible for two-thirds of the total.”

“A crucial message from the fiscal monitor is that when private debt is on an unsustainable path it is important to intervene early on in the process to make sure financial crises and recessions can be prevented,” Vitor Gaspar, the director of the IMF’s fiscal affairs department, told the Guardian. “Gaspar said debt was unevenly spread and concentrated in the advanced countries of the west and some of the big emerging market economies such as China.”

Scroll forward to July of 2018 and the Institute of International Finance reported that global debt had hit $247 trillion by the first quarter of 2018, a new record. That’s $95 trillion higher than the old record just two years earlier.

Here at home, corporate debt is blinking red on the macroeconomic dashboard. Last month USA Today reported that a decade after the “financial crisis, the seeds are being sown for the next potential meltdown.”

“This time, the tinder isn’t subprime mortgages but a mountain of risky corporate debt that looks eerily similar,” the paper reported, noting that there was a record $4.3 trillion in lower-quality corporate loans and high-yield bonds, up from $2.4 trillion in 2010.  “I view this as the most severe threat to the economy and financial system,” Mark Zandi, chief economist of Moody’s Analytics told USA Today.

Meanwhile, on Main Street American households are on track to take on $4 trillion in consumer debt by the end of this year according to CNBC.

“Americans owe more than 26 percent of their annual income to this debt,” CNBC reported. “That’s up from 22 percent in 2010. It’s also higher than debt levels during the mid-2000s when credit availability soared.”

And no recitation of obscene debt levels would be complete without including the handiwork of the Trump/Ryan/McConnell wrecking crew with their $1.5 trillion tax cut heavily weighted to the wealthiest individuals and largest multinational corporations.

They shrunk the amount of revenue coming into the government and shifted that flow to their already wealthy donors, leaving a mountain of public debt behind.

“The Congressional Budget Office still projects debt rising very quickly, with particularly fast growth in the amount America spends on its debt interest payments,” reports the Washington Post. “Interest costs are expected to approximately double as a share of the economy over the next decade and even overtake the cost of funding Social Security — the biggest expenditure in the Federal budget by 2048.”

The tax cut was billed as a way to encourage U.S. multinationals to repatriate the close to $2 trillion in cash they had “stranded” overseas. But as former Labor Secretary Robert Reich wrote in the American Prospect, instead of investing in pay raises for workers and new equipment they gave their CEOs bonuses and bought back their own stock.

“Now that the new corporate tax cut is pumping up profits, buybacks are on track to hit a record $800 billion this year,” wrote Reich. “For years, corporations have spent most of their profits on buying back their own shares of stock, instead of increasing the wages of their employees, whose hard work creates these profits.”

The former Clinton Labor Secretary notes that up until 1982 stock buybacks were illegal.

He continued, “Stock buybacks are artificial efforts to interfere in the so-called “free market” to prop up stock prices. Because they create an artificial demand, they force stock prices above their natural level. With fewer shares in circulation, each remaining share is worth more.”

By Friday, the markets were back, whistling past the multiple fault lines that last week’s stock market swoon brought into base relief.

Traditionally, in our binary demented world of global high finance we divide investors into two distinct species, the bears, ever pessimistic that always bank on a downturn, and the bulls, who are insanely optimistic and expect the new market high is always just around the corner.

I submit that last week’s drop was the work of a pack of investors I dub the Wile E. Coyotes, who for years were running in pursuit of profits until they realized there was no earth under their feet and then ran out of momentum, looked down into a bottomless canyon of debt and just lost their mojo.