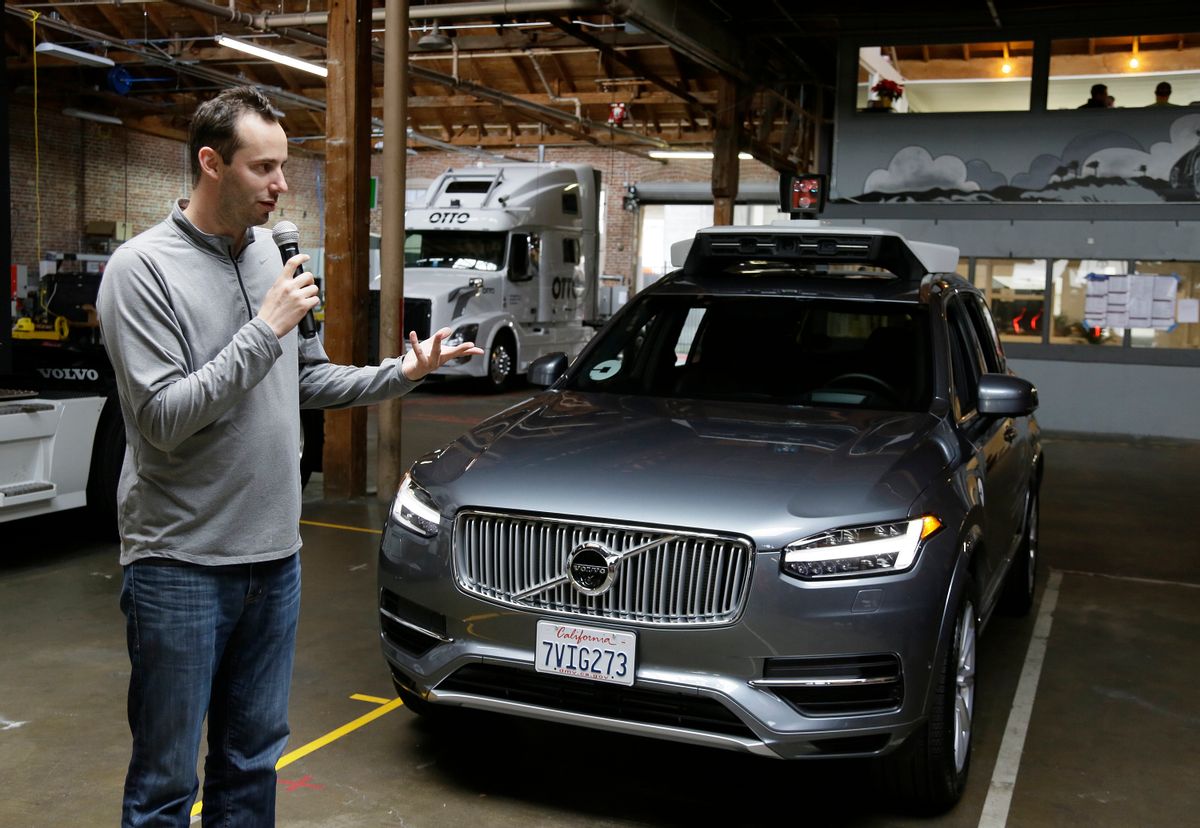 FILE - In this Dec. 13, 2016, file photo, Anthony Levandowski, head of Uber's self-driving program, speaks about their driverless car in San Francisco. A self-driving car company founded by Google is accusing a former top engineer of stealing pivotal technology that is propelling Uber's effort to assemble a fleet of automated vehicles for its popular ride-hailing service. The complaint cites evidence that Levandowski, a former manager in Google's self-driving car project, loaded 14,000 confidential files on a laptop before leaving to start his own company in 2016. (AP Photo/Eric Risberg, File) (AP)
--

American journalist and Pulitzer Prize winner Charles Duhigg published a shocking exposé in the New Yorker regarding the ongoing legal saga of former Google engineer, Anthony Levandowski, who defected to Uber in 2016 before being fired. The fine print of the exposé contains shocking claims regarding Google's negligence — including claims that Google never publicly reported multiple autonomous vehicle crashes, and that Levandowski took autonomous cars on "forbidden routes" for which the car's software was not trained to handle.

The report depicts Levandowski as a stereotypical startup guy: self-important, imperious, and possessing a techno-utopian worldview that drove his belief that the rules don't apply to people like him. (Notably, Levandowski is the founder of a pseudo-religion that believes God will be an artificial intelligence.) Levandowski is best known for his role in a year-long litigation between Uber and Google’s self-driving car project, Waymo. Specifically, Waymo alleges Levandowski stole confidential files full of trade secrets when he left Google to start his own self-driving car startup, which was eventually acquired by Uber.

According to the report, Levandowski was in charge of hardware development for “Project Chauffeur”— Google's secret self-driving-car division that later evolved into Waymo. At some point, his obsession with innovation overtook his morality, which resulted in an unreported crash involving one of Google’s self-driving vehicles.

One day in 2011, a Google executive named Isaac Taylor learned that, while he was on paternity leave, Levandowski had modified the cars’ software so that he could take them on otherwise forbidden routes. A Google executive recalls witnessing Taylor and Levandowski shouting at each other. Levandowski told Taylor that the only way to show him why his approach was necessary was to take a ride together. The men, both still furious, jumped into a self-driving Prius and headed off.

The car went onto a freeway, where it travelled past an on-ramp. According to people with knowledge of events that day, the Prius accidentally boxed in another vehicle, a Camry. A human driver could easily have handled the situation by slowing down and letting the Camry merge into traffic, but Google’s software wasn’t prepared for this scenario. The cars continued speeding down the freeway side by side. The Camry’s driver jerked his car onto the right shoulder. Then, apparently trying to avoid a guardrail, he veered to the left; the Camry pinwheeled across the freeway and into the median. Levandowski, who was acting as the safety driver, swerved hard to avoid colliding with the Camry, causing Taylor to injure his spine so severely that he eventually required multiple surgeries.

The Prius left the Camry behind—and they didn’t go back to see if the driver had been hurt, according to the report.

Levandowski, rather than being cowed by the incident, later defended it as an invaluable source of data, an opportunity to learn how to avoid similar mistakes. He sent colleagues an e-mail with video of the near-collision. Its subject line was “Prius vs. Camry.” (Google refused to show me a copy of the video or to divulge the exact date and location of the incident.) He remained in his leadership role and continued taking cars on non-official routes.

According to former Google executives: “there were more than a dozen accidents, at least three of which were serious."

One of Google’s first test cars, nicknamed kitt, was rear-ended by a pickup truck after it braked suddenly, because it couldn’t distinguish between a yellow and a red traffic light. Two of the Google employees who were in the car later sought medical treatment. A former Google executive told me that the driver of the pickup, whose family was in the truck, was unlicensed, and asked the company not to contact insurers. kitt’s rear was crushed badly enough that it was permanently taken off the road.

In response to these incidences, a Google spokesperson told Duhigg that “safety is our highest priority as we test and develop our technology.” Regarding the kitt collision, a report was submitted, but “every person involved left the scene on their own accord.” In regards to the Camry incident, the spokesperson said it was “an unfortunate single-car accident in which another car failed to yield to traffic.”

In 2014, the state of California began to require companies to report “any manner involved in a collision originating from the operation of the autonomous vehicle on a public road that resulted in the damage of property or in bodily injury or death.” Google has reported thirty-six additional accidents since, but the Camry incident happened before the law. The company is using this loophole to deny culpability in the aforementioned accidents.