"The secret of change is to focus all of your energy, not on fighting the old, but on building the new" 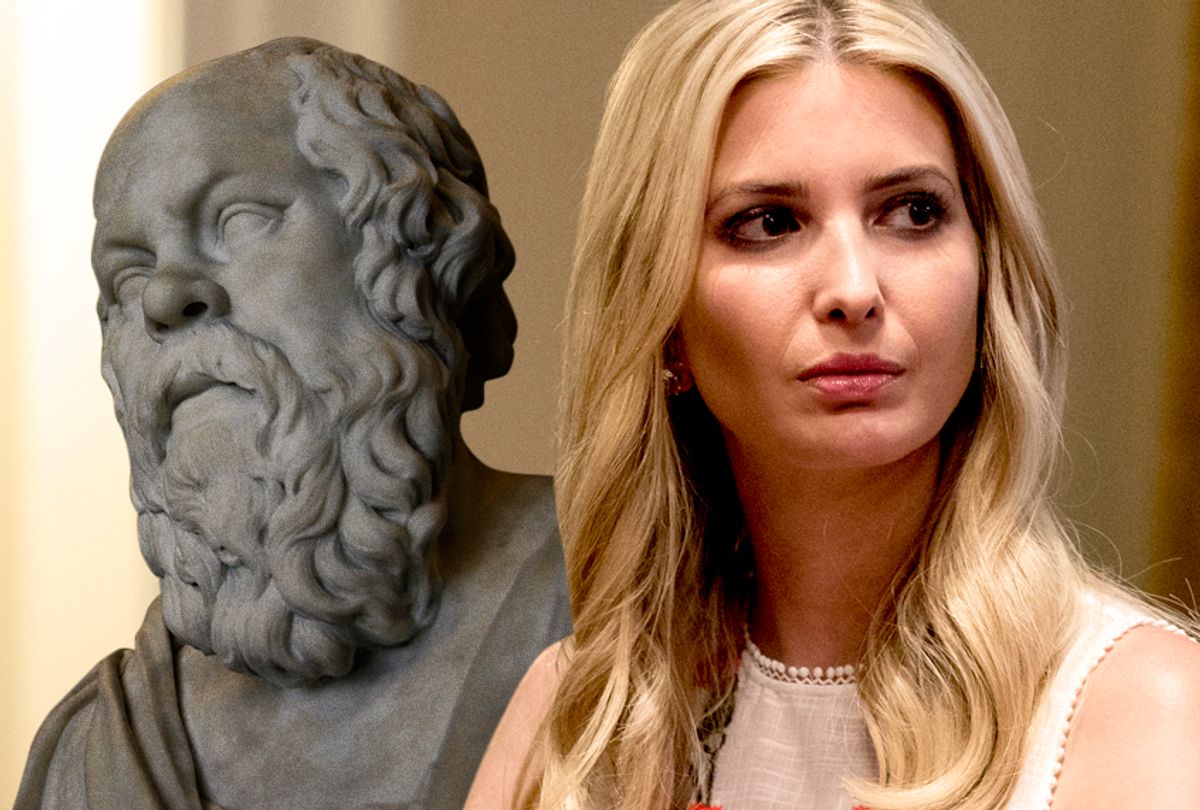 Ivanka Trump tweeted a motivational quote from Socrates on Tuesday, and the responses she received were probably not planned. That is likely because the Socrates she quoted was, in fact, a fictional gas attendant and not the revered ancient Greek philosopher.

“The secret of change is to focus all of your energy, not on fighting the old, but on building the new,” the first daughter tweeted, adding a credit to Socrates.

Twitter users were quick to point out that Socrates she quoted was actually from the best-selling “Way of The Peaceful Warrior: A Book That Changes Lives.” First published in 1980, the spiritual saga was written by Dan Millman. The paperback version is currently available on Amazon for $10.00.

While the first daughter and senior White House adviser was not necessarily wrong, many Twitter users suggested that she thought the philosopher had given the advice. Trump subsequently deleted the tweet and added a new one with the same message, this time adding a note that she had quoted "a fictional character"– "not the philosopher."

Trump's clarification, in turn, spurred even more ridicule, prompting users to tweet quotes with "notes" of their own:

"They don't think it be like it is but it do." - Oscar Gamble (note: a baseball playing character not the Zumba instructor I meet every 3rd Tuesday of the month)

“The secret of change is to focus all of your energy, not on fighting the old, but on building the new.”
- Socrates
- Dan Millman
-Wayne Gretzky
-Michael Scott
-Ivanka Trump

“Maybe in order to understand mankind, we have to look at the word itself: “Mankind.” Basically, it’s made up of two separate words, mank and ind. What do these words mean? It’s a mystery, and that’s why so is mankind.”
-Jack Handy (the real fictional character Jack Handy)

"All we are is dust in the wind." -- So-crates (the inspiration and white-robed fiddle player for the 1970s rock band Kansas)

This is far from the first time that Trump has courted controversy on Twitter. A March 2018 tweet about a tour of an education center in New Hampshire later became a meme, with a picture of her measuring out liquid into a beaker. As Salon's Shira Tarlo wrote at the time, "Trump later shared images from her school visit on her social media accounts, leading many individuals to criticize her for having no experience or expertise in education, infrastructure or science."

Trump also caused outrage when she tweeted a photo of her with her son while the White House’s zero tolerance policy, which separated children from their families who were caught crossing the border without permission, was still in place.

It spurred the trending hashtag "#WhereAreTheChildren" on Twitter, and a flurry of responses labeling her tweet as "tone deaf." "This is so unbelievably tone deaf, given that public outrage is growing over young kids being forcibly ripped from the arms of their parents at the border — a barbaric policy that Ivanka Trump is complicit in supporting," the political scientist Brian Klaas tweeted at the time.