Fandom can build community, but it can also take a dark and even dangerous turn 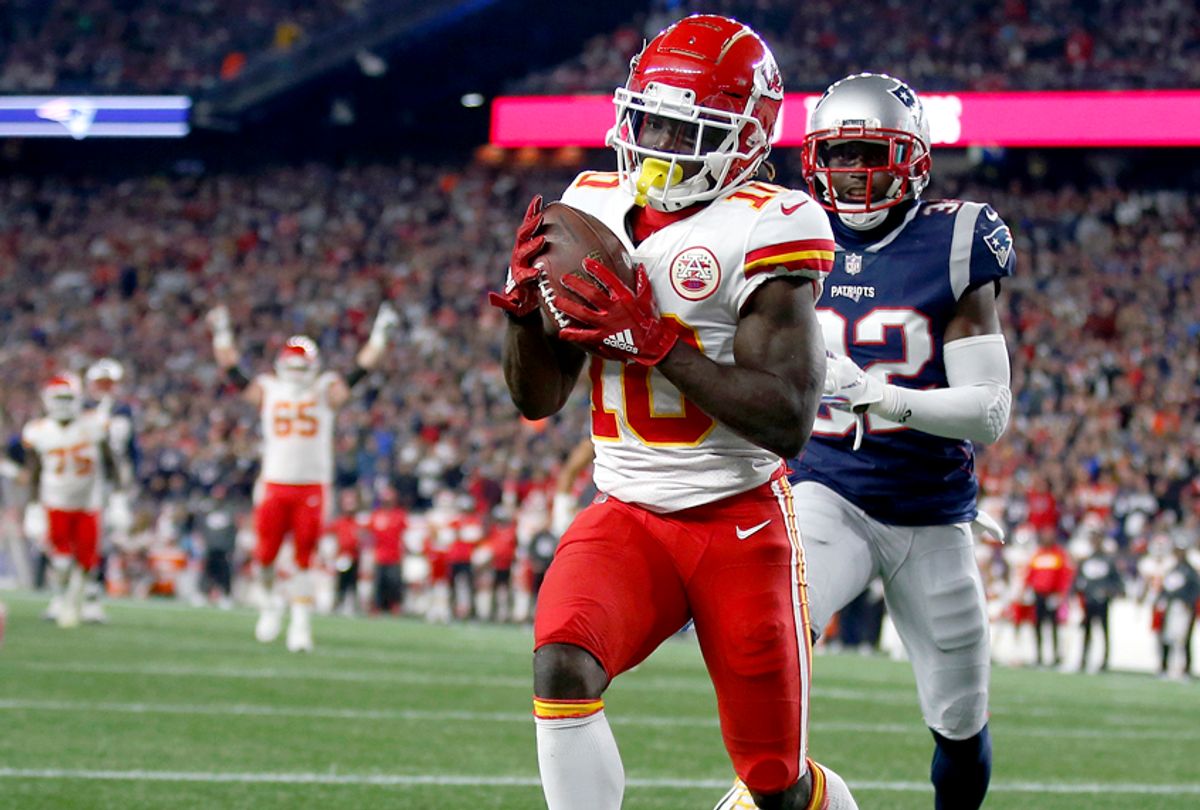 On Sunday night in Boston at Gillette Stadium, Kansas City Chiefs wide receiver Tyreek Hill was shot out of a cannon — or at least it looked that way as he bolted down field at lightning speed for a 75-yard touchdown. It was his third trip into the end zone that night. Hill approached the stands in celebration mode, and he was greeted with middle fingers by a group of Patriots fans. Then one, a 21-year-old from Mansfield, threw beer at the Chiefs star.

Hill didn’t flip out, though. He maintained his cool and returned to the sideline. "My coach [Andy Reid] told me, 'Don't get emotional. Don't get mad about it, because it comes with the territory,'" Hill said, according to Boston.com. "I'm not mad at all."

The Patriots organization responded quickly to this matter, releasing a statement:

Gillette Stadium security has identified the fan who violated the fan code of conduct by tossing beer onto a player during the game last night. The matter has been turned over to local law enforcement and the fan will be sent a letter of disinvite to all future events at Gillette Stadium.

The fan appears to have violated Gillette Stadium’s code of conduct, which prohibits ticket holders from exhibiting behavior that is unruly, disruptive, irresponsible or illegal in nature; interfering with any ongoing event, business activity or the enjoyment of others; or verbally or physically harassing any guests or staff.

Hill’s super-agent Drew Rosenhaus went on ESPN advocating for a more stringent punishment. “That type of behavior is unacceptable," said Rosenhaus. "Players have to be protected. We want that fan to be prosecuted.”

I wholeheartedly agree. An adult throwing beer on a player should be thrown in the back of a jail cell. Sports fans can be too wild and need a serious lesson in manners, and making an example of this incident would be a great start. Year in and year out, we are bombarded by stories about the conduct of players; however, disgusting fans get let off of the hook all of the time as professional sports harbors a culture of drunken, toxic masculinity that is in need of a serious cleanse.

Last year during the NBA finals I sat in a hotel bar in Cleveland, not too far from where the Cavaliers faced the Golden State Warriors. I had been working like crazy that season, so I didn’t get a chance to follow the NBA as closely as I normally do, but I knew I wanted LeBron to win, because I’m not a fan a of the West Coast All Stars being passed off as a regular team.

The bar was empty, and I sat alone, nursing a cup of coffee as I edited. The bar filled up, then overflowed with James jerseys, Curry and Durant shirts, and suits as game time approached.

There were too many people crowded around for me to continuing working so I traded the coffee for alcohol and decided to grab a bite and catch some of the game. A Golden State fan in a snug Draymond Green t-shirt barged between me and the woman in Cavs gear.

“A Bud Light and a shot of Jack!” he yelled repeatedly until the servers recognized him.

Both of the dudes talked trash to me about the other team while the woman just gazed at her cell phone screen, almost never glancing at the game she dressed up for. My lackluster responses — “Yeah, Curry is good," "Yeah, LeBron is good" and "Yeah, that’s crazy” — probably weren't satisfying enough for the two guys, so they stared yelling across me at each other.

It went from the refs cheating, to the Cavs suck, to the Warriors suck, to why LeBron and Durant are different and the same and back and forth and back and forth. The woman who came with the Cavs fan left before halftime and I don’t even remember him saying goodbye. He definitely didn't escort her out.

I interrupted their argument to ask them to watch my seat while I ran to the restroom and when I came back, the Cavs guy was poking his index finger in the middle of the Warriors fan's forehead, yelling, “I will beat your little ass!” over and over again. Most of the attention from the game had shifted to their argument. Eventually the Cavs guy was dragged out. Nobody got hurt, but what was the point of that interaction? Two grown men were ready to fight over athletes they don’t even know.

That wasn't the first time I saw fans take it too far. I've seen it since I played AAU basketball and watched angry parents fight with referees over calls as if we weren't children. Why do adults act like this over sporting events?

Daniel Wann, a psychology professor at Murray State University and a leading expert on fan behavior, researched over 24 benefits of social well-being that come with being a crazed fan.

“There has been a good deal of research in my lab and by others, replicated in multiple cultures, that indicate when an individual becomes attached to or identifies with a sports team, there are pretty clear psychological benefits of that,” he told the Seattle Times in 2014.

“If you are Seahawks fans in Seattle, right now it’s pretty hard to feel lonely. It’s pretty hard to feel alienated.” Wann said. “If you’re wearing a Seahawks jacket and walking through the mall, people are high-fiving you, people you’ve never seen before and never will see again. There’s a sense of community and connectedness that comes with it.”

Wann makes valid points, but are we that desperate for the community? It’s cool to be connected to your neighbors; however, that connection should never lead to violence. Hill isn’t the first victim, either. Back in 2004, then-Indiana Pacers forward Ron Artest (now known as Metta World Peace) got into an altercation with  Ben Wallace, then a forward for the Detroit Pistons, during a game at the Palace of Auburn Hills. Their fight was broken up and Artest headed to the scorers table when a fan named John Green threw a drink on him. Artest then attacked the stands, causing a brawl which led to him and a group of other players being suspended for a long time. In 2017, LeBron James bought a home in LA and someone who probably wasn’t a James fan spray painted the n-word on the front of it.

Back to Boston, in 2017 Baltimore Orioles All-star Adam Jones received similar treatment to Hill when a fan taunted and attacked him while he was just trying to work. “A disrespectful fan threw a bag of peanuts at me,’’ Jones said in response to the incident. “I was called the N-word a handful of times tonight. Thanks. Pretty awesome.’’

These out of control fans and vandals need to to be fined and/or locked up — that's the only way the culture will change.

It’s interesting how people can run at the argument surrounding athletes standing or kneeling during the national anthem but remain silent when actual players are being attacked.

Makes you wonder why they take a knee.