Trump called Republican Rep. Greg Gianforte “my kind of guy" because he bodyslammed a Guardian journalist 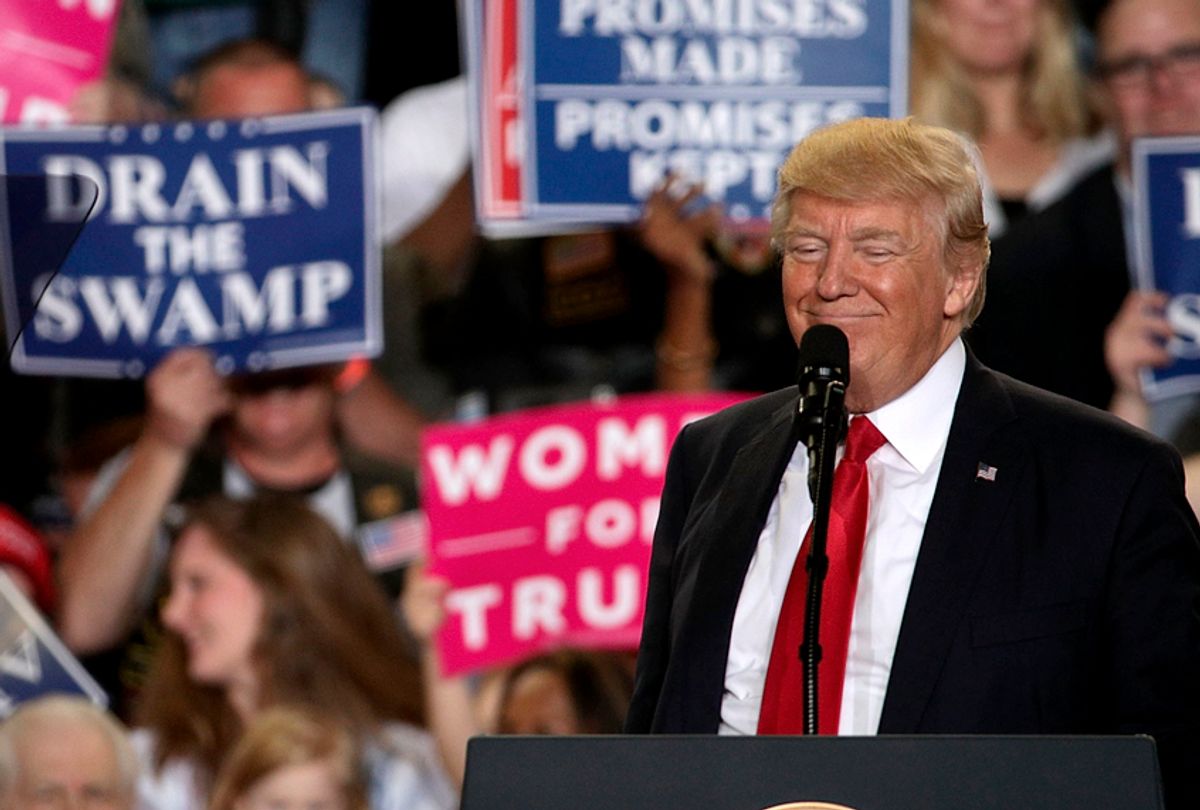 The same day missing journalist Jamal Khashoggi’s last column was published by The Washington Post, President Donald Trump applauded a criminal act of violence against a journalist to wild applause from a crowd of adoring supporters at a campaign rally.

Stomping on his own narrative that "Democrats produce mobs, Republicans produce jobs,” the president praised Republican Rep. Greg Gianforte, a convicted criminal, during a rally in Montana on Thursday. He's "my kind of guy," Trump said of the recently elected Republican who bodyslammed Guardian journalist Ben Jacobs one day before the 2017 special election.

Congressional Republicans, for their part, aren't complaining about Trump's off-script quip. They've either stayed mum, stuck to campaign talking points or refused to respond to requests for comment

The next day, Sen. Lindsey Graham, R- S.C., tweeted about immigration; House Speaker Paul Ryan, R-Ma., tweeted about human trafficking and Sen. Chuck Grassley, R-Iowa, tweeted about the expansion of a state highway. All three representatives’ offices were called for comment and did not respond — Congress is on recess ahead of the midterms, however, many congressional offices remain open.

It seems the silent treatment isn’t the game plan for one former Republican representatives, however.

Former Rep. Joe Walsh, R-Il., took to Twitter to lecture the conservative side of the aisle, telling them “don't ever complain again about violence coming from the Left.”

Trump literally applauds a Congressman physically body slamming a journalist to the ground.

And not one Republican will condemn the President. Smh. https://t.co/eA5Xq2YxEc

.@realDonaldTrump - I saw your rally last night. Yet more big talk from a guy that can never back it up. Btw, I thought I should add to your morning President’s Daily Brief (PDB). This is something called a “gym.” pic.twitter.com/KuyT6D1vKK

On his way to a Montana rally Thursday, the president said he is considering “very severe” action against Saudi Arabia, the place thought to be responsible for Khashoggi’s potential death, because that’s where the writer was last seen. Hours later at the rally, Trump proclaimed his affection for a man who assaulted a different journalist.

Hours later Trump praised Gianforte’s gusto, even though the representative eventually pleaded guilty for the attack and was given a fine. To apologize, he donated to the Committee to Protect Journalists. According to CPJ, 44 journalists have been killed and 39 journalists have been attacked in 2018.

Greg Gianforte just body slammed me and broke my glasses

“Any guy that can do a body slam, he’s my kind of guy,” Trump said to cheers. “I had heard that he body-slammed a reporter ... and he was way up, and I said, ‘Oh, this is terrible, he’s going to lose the election.’ Then I said, ‘I know Montana pretty well,’ and I said I think it might help him. And it did.”

These hot and cold remarks are not uncharacteristic of the president, who often takes aim at journalists and their reporting, coining the term “fake news” for actual fact.

In response to Trump’s speech, the president of the White House Correspondents Association Olivier Knox said: “All Americans should recoil from the president’s praise for a violent assault on a reporter doing his Constitutionally protected job.”

Aside from his insensitive remarks Thursday, Trump told reporters he expects to have Saudi testimony on the matter “very soon.”According to the Washington Post, Turkish investigators believe a 15-man Saudi hit team dismembered Khashoggi’s body the day he entered the consulate.

Khashoggi was last seen entering the Saudi Consulate in Istanbul on Oct. 2.

Officials in Turkey believe there is evidence that Khashoggi was killed by Saudi operatives. However, the kingdom’s leaders deny any involvement.