Carbon capture: What we don’t talk about when we talk about climate change 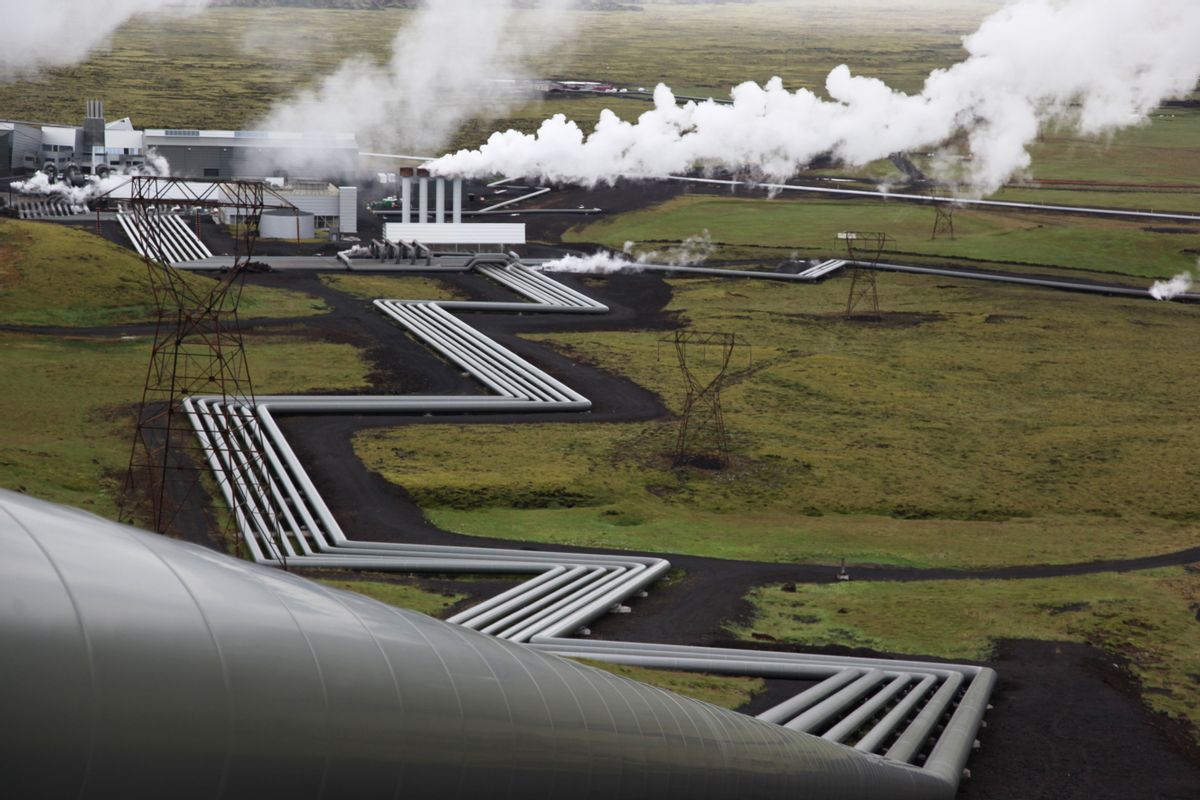 The latest Intergovernmental Panel on Climate Change (IPCC) report lays out a rather grim set of observations, predictions and warnings. Perhaps the biggest takeaway? That the world cannot warm more than 1.5 degrees Celsius (1.5°C) over pre-industrial levels without significant impacts.

If the world warms a mere half a degree more than that, hundreds of millions of people could face dire consequences — namely famine, disease and displacement — from things like rising sea levels and increased drought and flooding.

Time for action to stem the worst effects of climate change is quickly running out, however. If we’re to stay below or within range of that 1.5°C threshold, global carbon emissions must decrease by about 45 percent from 2010 levels by 2030, and we must reach zero carbon output around 2050. Energy sector carbon emissions, however, are still growing, not shrinking.

What’s more, it won’t be enough to simply slash carbon emissions to zero. As the latest IPCC report points out, we’ll also need to suck up to 1 trillion metric tons of carbon from the biosphere over the 21st century.

If large-scale CO2 extraction is to be effective, many experts warn that such efforts will need to begin in earnest within the next few years. But carbon extraction is far from a primary feature of climate discussions among policy makers. Glen Peters is a climate researcher at the CICERO Center for International Climate Research in Oslo. He told Norway’s VG News:

“There are media reports of images showing wind turbines and solar panels. It is well and good, but meeting the goals in the Paris agreement requires so-called negative emissions—removing much of the CO2that has already been released. The subject is little talked about, but politicians will eventually come to understand what a huge task it is.”

The other problem is that the technologies currently capable of sucking CO2 from the air are still being developed and are too expensive to be commercially viable, which leaves experts hamstrung as to whether this is the right approach to stall global warming. In a 2016 paper published in Science, Peters and Kevin Anderson, the deputy director of the Tyndall Centre for Climate Change Research at the University of Manchester, called the assumption that these technologies and concepts will work to scale in time a “moral hazard.”

However, Roger Aines, chief scientist of the energy program at Lawrence Livermore National Laboratory, disagrees. The “magnitude of the problem” is such, he told Truthout, that “we have to get started” with widely employing technologies capable of removing CO2 from the air. “It’s the question of how to get started,” he said, “that occupies a lot of my time.”

How to achieve negative emissions

For the past few decades, talk of CO2 filtration has largely surrounded carbon capture and storage (CCS). In essence, CCS is when CO2 is removed at the source of the emission, like a power plant smokestack, before being repurposed. In most cases, the captured CO2 is piped back underground to boost oil production in wells that are drying up.

There’s a reason CCS is crucial when it comes to carbon extraction: It’s far easier to filter out CO2 at the source than it is directly from the air. That’s because the ratio of CO2 in, say, a coal power-plant exhaust flue (about 10 percent CO2) is that much higher than the ambient air (where CO2 is about 0.04 percent). The problem is that most CCS technologies are, at the very best, carbon neutral, meaning they squirrel away as much CO2 as they emit in the first place. However, if we’re to remain under that 1.5°C threshold, we’ll need to employ large-scale use of negative emission technologies—in other words, technologies that extract more CO2 from the atmosphere than they release.

Bioenergy with carbon capture and storage (BECCS) receives broad support in the negative emissions arena. The overall premise behind BECCS is fairly simple: Growing trees and tall grasses for use as an energy source. As they’re growing, these plants will absorb CO2 from the air, and then, when burned for energy, the CO2 emitted will be captured and piped back underground. Therefore, the whole process would absorb and store away more CO2 than it would emit. Voila! Negative emissions.

There are, however, any number of major obstacles standing in the way of BECCS being employed on a scale large enough for it to make a significant impact. For one, the amount of land required to make BECCS feasible under the Paris agreement is staggering — as much as three times the area of India. Furthermore, as Harvard Professor David Keith warned in Carbon Brief, “[W]e must be cautious of technologies that aim to remediate the carbon problem while greatly expanding our impact on the land.”

Then there’s the potentially complicated international logistics of growing the crops in one country, shipping them to another for combustion, and then to another for permanent storage — each layer possibly adding a separate carbon footprint, while making the measuring, reporting and verification of the system a nightmare of bureaucratic red tape.

All of which explains why there is currently no commercially operable BECCS facility, explained Corinne Le Quéré, professor of climate change science and policy at the University of East Anglia. Nevertheless, it’s an exciting technology in regard to its electricity-producing potential, and is being seriously explored by the chemical industry as a power source, she added. “The fact that BECCS produces energy and an income from the process itself is a very big incentive.”

The cost of negative emissions has always been prohibitive. An American Physical Society report from 2011 put the price of capturing CO2 directly from the air between $600 and $1,000 per metric ton. In contrast, the cost of capturing CO2 at the source can be roughly 10 times less. Nevertheless, a Canadian company called Carbon Engineering claims that its pilot plant in Calgary can extract CO2 from the air for between $94 to $232 per metric ton. To put that into perspective, carbon is currently priced in Europe at $20.03 a metric ton, and if the Paris Climate Agreement’s emissions targets are to be met, Carbon Tracker warned, the price of traded carbon allowances must rise to levels that make even efficiently run coal power plants unprofitable.

In short, Carbon Engineering’s technology works like this: When air is blown through towers containing a potassium hydroxide solution, the CO2 molecules react with the chemical mixture to make potassium carbonate, which is then processed into calcium carbonate pellets. When heated, the pellets release CO2 for capture. What then? Carbon Engineering plans to use the CO2 to make low-carbon biofuels.

Carbon Engineering is one of only a few companies seriously developing direct air capture technologies at reasonable costs. At its Iceland power plant, Climeworks built a unit that extracts CO2 directly from the ambient air and pipes it underground, where it combines with the country’s basaltic rock to create fast-forming minerals, according to a report in Quartz — part of its fantastic recent series on climate change. Earlier this year in Zurich, Climeworks launched the world’s first commercial direct air capture plant, where the filtered CO2 is supplied to a nearby greenhouse to grow vegetables.

According to Graciela Chichilnisky, CEO and co-founder of carbon-capture company Global Thermostat, the company’s technology — which is powered by low-cost leftover heat — will be able to remove CO2 for between $25 and $80 per metric ton when it’s scaled up (and depending on capacity).

There are other more speculative projects in the pipeline. Back in 2007, the British billionaire entrepreneur Richard Branson offered $25 million to anyone who develops a commercially viable technology capable of removing at least 1 billion tons of CO2 annually from the air for 10 years. The prize remains unclaimed, but is still up for grabs.

Klaus Lackner, director of the Center for Negative Carbon Emissions at Arizona State University, is currently working on a pilot direct air capture technology that he hopes will be, within a couple of years, capable of removing from the air about a ton of CO2 a day. Commercially speaking, these technologies as a whole are “truly interesting when below $100 a [metric] ton,” he said, “but you could imagine that, if things are really hurting, people are going to do it anyway, even if it is more expensive.”

Action must be quick

Besides BECCS and direct air capture technologies, there are other proposed ways to suck CO2 from the biosphere, most of which are laid out in a recent European Union report. Afforestation — the planting of forests in treeless areas—is one method bandied around by experts. Lawrence Livermore National Laboratory’s Roger Aines has other ideas.

“The last 200 years or so, we have lost the equivalent of 500 gigatonnes of carbon dioxide from the carbon content of our agricultural soil. So, it’s reasonable to say, if we use good agricultural practices, that we can return that carbon from the air to the soil,” he said. While a variety of negative emissions technologies must be employed together to tackle climate change, better land use practices are the ones most likely to have the “biggest impact,” he added.

Nevertheless, “the reality of this is that it’s like a major war. The next 20 years are going to be pretty bad, from a climate perspective,” Aines said, mirroring the findings of the latest IPCC report: that any increase in global temperatures will only worsen the impacts from extreme weather patterns already being felt. And while Aines still believes that “we’re going to figure things out,” what’s now clear is that we only have a dozen or so years to actually do so.