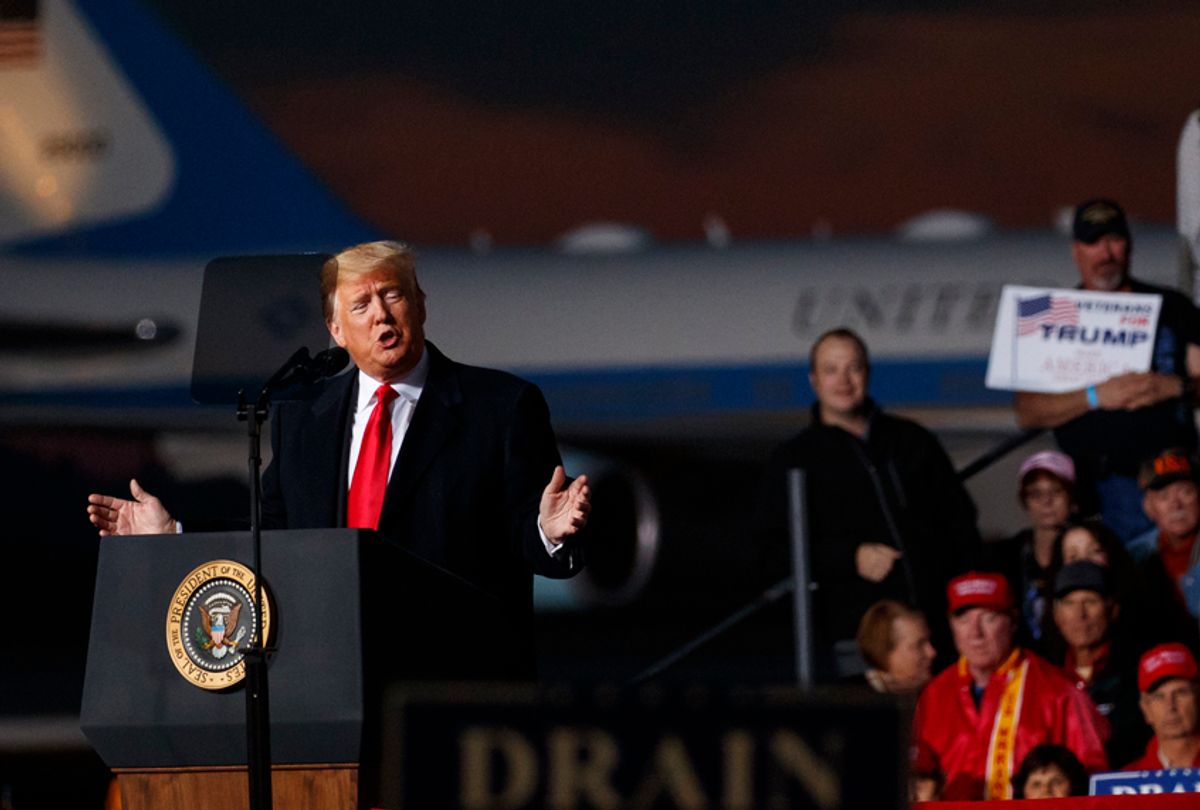 Our president held a political rally in Montana this week. In between screaming “fake news!” at the fenced-in media and leading attendees in the  “lock her up!” chant, Trump decided that a Thursday night in October, less than three weeks before the midterm elections, was the perfect time to tell his adoring audience what a great fighter he is.

He found himself in reliably red Montana, which he carried by 20 points in 2016, having to give a rally to support the Republican candidate for Senate, Matt Rosendale, because he is running two points behind the Democratic incumbent, Jon Tester, according to the latest polls.

He was also there to support the campaign of Republican Congressman Greg Gianforte, who is running for re-election. You will perhaps recall Gianforte as the congressional candidate who slammed a reporter for the Guardian to the ground and repeatedly punched him in the face in June of 2017, reportedly because he was “sick and tired” of the reporter asking him questions. "Any guy who can do a body slam, he's my candidate, he's my guy," Trump told his Montana crowd, to applause and loud screams of approval.

During the week his White House has been consumed with finding some way to excuse the apparent murder of Washington Post journalist Jamal Khashoggi by the Saudis in their embassy in Istanbul, Turkey, Trump decided now was a good time to celebrate the only member of Congress who has been convicted of violently assaulting a journalist who was just doing his job, covering a political campaign (Gianforte was sentenced to a six-month suspended sentence, 20 hours of anger management counseling, 40 hours of community service, and was assessed $385 in court costs and fined $4,464.97).

But he didn’t stop there. Musing on Gianforte’s skills as a body-slammer Trump recalled that Vice President Joe Biden had “challenged me to a fight, and that was fine. And when I said he wouldn't last long, he'd be down faster than Greg would take him down. He'd be down so fast. Remember? Faster than Greg. I'd have to go very fast. I'd have to immediately connect."

Let’s take a moment and consider these fine words from the President of the United States. First, what Trump is praising Gianforte for is the wrestling equivalent of a sucker punch. Ben Jacobs, the reporter for the British newspaper The Guardian, was asking him a question about the Republican healthcare plan when Gianforte suddenly “grabbed Jacobs by the neck with both hands and slammed him into the ground behind him,” according to Alicia Acuna, a Fox News reporter who witnessed the assault. “Gianforte then began punching the man, as he moved on top the reporter and began yelling something to the effect of ‘I’m sick and tired of this!’” (You can listen to a tape of the incident here)

“At no point did any of us who witnessed this assault see Jacobs show any form of physical aggression toward Gianforte, who left the area after giving statements to local sheriff’s deputies,” the Fox News reporter recalled.

So what captured Trump’s attention wasn’t a story of a man defending himself, but rather a man violently attacking an unsuspecting victim who had a legitimate reason to be asking the candidate questions about issues in the campaign for the office he was aspiring to. An attack that got him arrested and convicted of assault.

With that, Trump was off into dream world. Everything he said there after was all in his imagination. He wasn’t telling his Montana audience what he did to Joe Biden. He was telling them his imaginary fight with Biden “wouldn’t last long” because “I’d have to go very fast. I’d have to immediately connect.”

What? Who talks like that? Who says “go very fast?” What does “immediately connect” even mean? Huh? What the hell is he talking about?

Trump has never seen a punch thrown in anger in his life. He’s never thrown a punch himself. He has certainly never been hit by one. He’s never had anyone on top of him, punching him in the face; or been on top of someone else, punching another person in the face. He’s never been knocked out. He’s never come back to consciousness, unable to see, both of his eyes swollen shut, nose and ribs broken, blood from facial cuts and mouth pooling in the dirt next to a gravel road.

I have. That was a beating I took one night in Columbus, Georgia, when I was jumped by four guys who were out cruising the back streets of the town, looking for someone to beat up. I was in a phone booth making a call across the street from my rented trailer when the accordion door slammed open, I was spun around, and the next thing I saw was a gigantic fist wearing a big ring about three inches from my eyes. The fist hit my face, snapping my head back, breaking the glass wall of the phone booth. They dragged me out, and I managed to flail a couple of punches before I was thrown to the ground. They took turns pounding my head while the others kicked me.

Only the headlights of a passing car saved me. The guys who beat me fled the scene, but they weren’t finished. The same four were arrested a few hours later in the process of beating a guy they had picked up and driven to a secluded parking lot behind a junior high school. Their second victim that night died in the emergency room at the Fort Benning hospital in a bed on the other side of a cotton curtain from me as doctors worked feverishly to save him.

Violence isn’t some lame-ass political candidate “body slamming” a reporter. People get beaten up badly enough to be hospitalized. Their bones are broken. They need to be stitched up. Sometimes they die.

This is the real problem with Donald Trump. He doesn’t just live in a world free of facts and morals and consequences, where he can idolize dictators like Vladimir Putin and Recep Tayyip Erdoğan and Prince Mohammed bin Salman. He lives in a world where because nothing bad has ever happened to him, it doesn’t happen to anyone else, either. Violence isn’t real for him. It’s just words, and as he shows us with his disrespect for facts and the people who report them, words don’t matter to him. The 59 Tomahawk missiles he sent into Syria were just a “strike” against a “regime” which, that week, he chose not to be fond of. That $110 billion “deal” with Saudi Arabia he talked about every other time he opened his mouth this week? It’s completely phony, but we do have a deal to sell weapons to Saudi Arabia that was made by the Obama administration, and what are those weapons? Well, a good many of them are the so-called “smart bombs” they have been dropping on innocent civilians in Yemen in that slaughterhouse of a war that’s been raging for the last three years.

Last August, a Saudi airstrike hit a school bus in Yemen, killing 51 and injuring 79. Forty of the dead and 56 of the injured were school children. A 2016 report to the U.N. Security Council held that 2,682 civilian deaths were caused by air-launched weapons. Those were air-launched smart bombs sold to Saudi Arabia by the United States.

That’s violence, deadly violence that was caused by American made bombs being sold in a so-called “weapons deal” to Saudi Arabia.

And now what’s Trump doing? Now that Mohammed bin Salman is being exposed for having ordered the death and dismemberment of Jamal Khashoggi, he’s looking wildly around trying to find a way to wiggle his way around the support  he’s given the sinister prince and the murdering regime in Saudi Arabia.

Trump loves guys like Congressman Greg Gianforte and Vladimir Putin and Recep Erdoğan and Mohammed bin Salam. He loves them because he thinks they’re “tough.” The problem is, Trump doesn’t know what the fuck tough is.