Drawing the spotlight away from her own accomplishments, "Veep" star Julia Louis-Dreyfus got political in real life 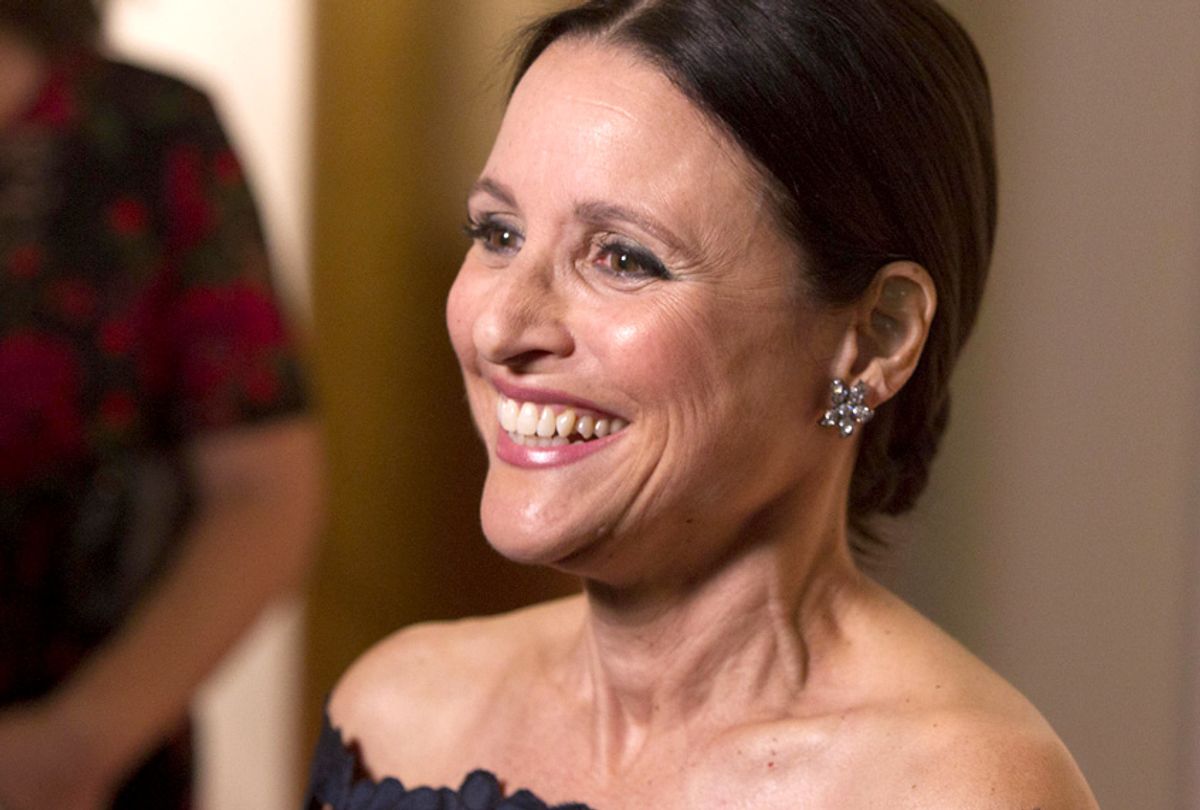 Drawing the spotlight away from her own accomplishments, "Veep" star Julia Louis-Dreyfus got political in real life during her acceptance speech for the Mark Twain Prize for American Humor as she bashed the recent confirmation of Associate Justice Brett Kavanaugh to the U.S. Supreme Court.

As it turns out, Louis-Dreyfus is an alumnus of the same high school that Dr. Christine Blasey Ford, who accused Kavanaugh of attempted rape in the 1980s, attended. The actress was one of 600 women from Holton-Arms in Maryland who signed a letter in a gesture of solidarity with Ford. Ford and Louis-Dreyfus attended the all-girls high school at the same time, according to HuffPost.

“I attended Holton-Arms – a girl’s school in the Washington area,” the outlet quotes Louis-Dreyfus as saying Sunday night. “It has been in the news lately. Back in Fourth Grade, as a matter of fact, I was in a very serious Holton-Arms production of ‘Serendipity.’ You know it’s funny with us Holton girls: I remember every detail of that play. I could swear to it under penalty of perjury. And, yet, I don’t remember who drove me to the show or who drove me home. Or if Squee or Tobin were there. Or if Brett put it on his weird wall calendar.”

“This, by the way, is totally true and not some kind of subtle attack on our newest Supreme Court justice,” Louis-Dreyfus added. “For God’s sake, the man has suffered enough.”

The letter about Kavanaugh, which was drafted on Sept. 17 to Congress, stated:

We, of the Holton Arms Class of 1984, are writing on behalf of our friend and classmate, Dr. Christine Blasey Ford, to attest to her honesty, integrity, and intelligence; and to contend that her decision to provide information pertaining to a sexual assault is not a partisan act. It is an act of civic duty and the experience she described in her letter needs to be seriously considered. We represent all political parties and we support Christine bringing this matter forward.

We stand with our friend Dr. Christine Blasey Ford and admire her honesty and resolve on behalf of our nation.

Louis-Dreyfus was not the only comedian to get political Sunday night. Tina Fey, who introduced the Mark Twain recipient, also did not shy away from the opportunity to talk about the Trump administration.

“Everyone talks about all the parallels between 'Veep' and the current administration, but I think it’s more like 'Seinfeld' — just a bunch of selfish dicks who don’t give a crap about anyone but themselves,” said Fey.

In reference to Holton-Arms, Fey added, “Anyone who knows Julia knows she cherished her high school days boofing out on the quad, playing devil’s triangle with her girlfriends – a classic American childhood!”

Louis-Dreyfus, best known for roles the shows “Seinfeld,” “The New Adventures of Old Christine” and “Veep," is the 21st recipient of the Mark Twain award. According to the Kennedy Center, the prize is given to those who “had an impact on American society in ways similar to the distinguished 19th century novelist and essayist best known as Mark Twain.” She joins the estimable list of recipients that includes Carol Burnett, Lily Tomlin, Carol Burnett, Whoopi Goldberg and Tina Fey.

The actress had taken a leave of absence from "Veep" last year, due to her much-publicized diagnosis with breast cancer, but recently announced that she is cancer free, adding that humor got her through a trying time.

“Cancer isn’t at all funny, but a big part of dealing with it has been finding the funny moments. The old cliché about laughter being the best medicine turns out to be true," Louis-Dreyfus said, according to CBS News. "Which is good, because that’s what the current administration is trying to replace Obamacare with.”