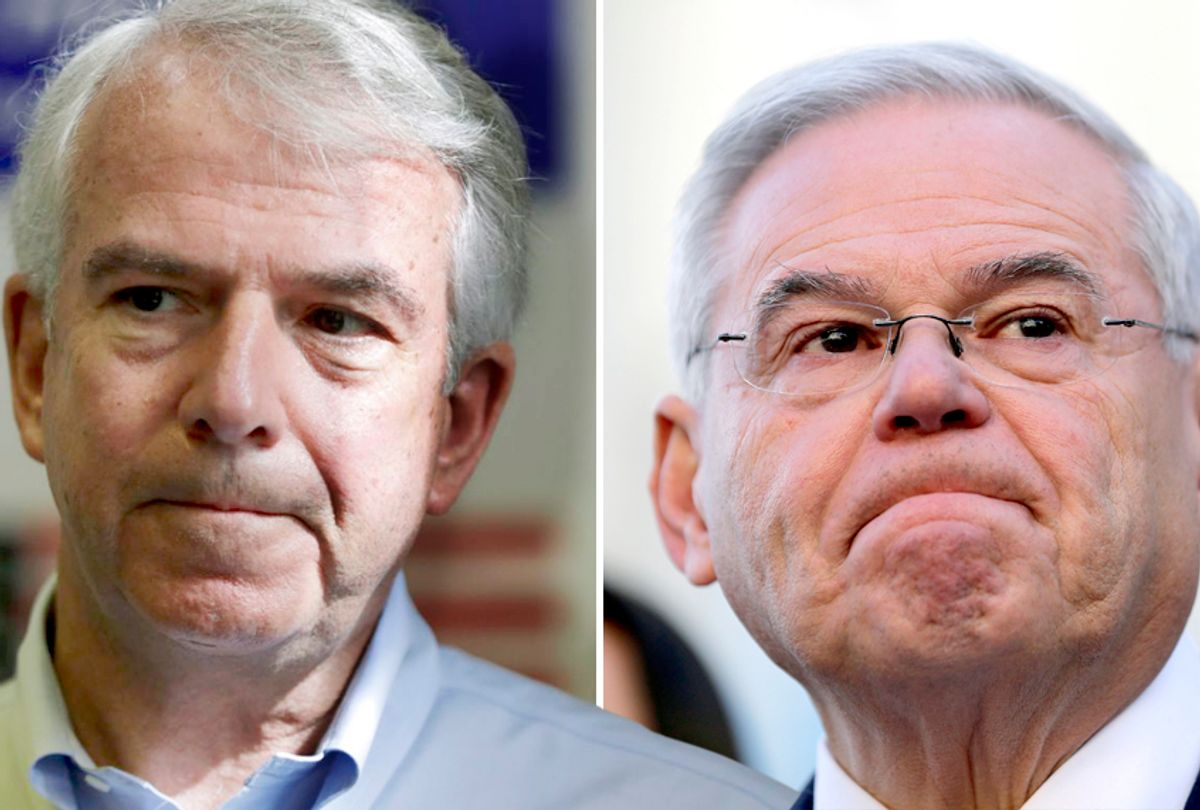 In the Menendez vs. Hugin battle for the U.S. Senate millions of dollars have been spent by both camps to dirty up the other Bob in the race. What we have are two men spending a fortune tearing down the other guy.

They both have a lot to work with.

With Senator Bob Menendez we have an incumbent “severely admonished” by his U.S. Senate colleagues because he “violated Senate Rules and related statutes, and reflected discredit upon the Senate.”  His transgressions included not disclosing lavish gifts he got from a Florida ophthalmologist that the Senator did big favors for including trying to extricate the eye doctor from federal scrutiny that culminated in the doctor being criminally convicted for ripping off Medicare for tens of millions of dollars.

Senator Menendez was criminally indicted but in 2017 the jury deadlocked and the Department of Justice opted not to retry him. He marketed it as an exoneration and took prosecutors to task for daring to bring the case.

In 1999 Bob Hugin, a former director at JPMorgan Chase & Co., joined Celgene Corporation,  a New Jersey pharmaceutical company, as its chief financial officer. Over the next 19 years he turned it into an $80 billion  behemoth. In 2017 his company paid $280 million  to the Department of Justice, 28 states and the District of Columbia  to resolve allegations “that Celgene promoted two cancer drugs — Thalomid and Revlimid — for uses that were not approved by the FDA and not covered by federal health care programs,” according to a DOJ press release. “The allegations included the use of false and misleading statements about the drugs, and paying kickbacks to physicians to induce them to prescribe the drugs.”

The company admitted no wrong doing. For Celgene, which reportedly charges  $18,546 for 28 pills of a cancer drug, it was the most cost effective way to resolve the matter which started as a pesky whistleblower case.

Neither Bob believes their well documented paper trail is a problem. The race is all about them, not the deepening crisis of affordability that years after the end of the recession has so many New Jersey families  still scrambling to cover the basics.

Since 2010 the United Way of Northern New Jersey has been tracking the fate of the state’s working class families that live above the federal poverty line but still have a hard time making ends meet week to week.

For decades the federal poverty calculation, set in 1969, has remained unchanged, except adjustments for inflation.  As a consequence, the ‘War on Poverty’s’ almost 50-year old formula has become increasingly irrelevant in a world where a cell phone and childcare have become essentials.

To get a fix on the population that’s struggling the United Way researchers look at the local costs of housing, transportation, childcare, telecommunications, utilities, healthcare and taxes and then look at the wages households have to work with to cover their expenses. The acronym for this cohort the United Way coined was ALICE, asset-limited, income constrained and employed. (The United Way has now completed ALICE surveys in 17 other states.)

In the more than 200,000 households in New Jersey that are headed by a woman 37 percent live below poverty, while 39 percent fit the ALICE criteria,  leaving just 23 percent that are not struggling week to week.

According to the most recent data released this week 38 percent of New Jersey’s households live either below the poverty line or in the ALICE cohort. Between 2010 and 2016 poverty remained relatively stable at the 10 percent level. But over that same period the number of New Jersey ALICE families went from 24 to 28 percent,  as wages stayed stagnant but costs for the basics rose.

“The cost of basic needs outpaced the rate of inflation and wage growth, rising 16 percent to $26,640 annually for a single adult and 28 percent to $74,748 for a family of four with an infant and preschooler,” according to a United Way press release. “Meanwhile, median earnings only increased by 12 percent during the same period. The result is that the number of ALICE households grew from 754,664 in 2010 to 895,879 in 2016, a 19 percent increase and nearly triple the number in poverty.”

“The increase in the number of ALICE households in New Jersey shows that the economic benefits of low unemployment, increased productivity, and a booming stock market are not reaching all residents,” said ALICE report author Stephanie Hoopes, Ph.D.

To get a real sense of the scale of this crisis consider that in Cumberland County the United Way found close two thirds of the households are either living below the poverty line or find themselves in the struggling ALICE cohort.

In Essex County over half of all the households are having a hard time. In Salem, Ocean, Atlantic  and Passaic counties close to half are in the same sinking boat.

According to the latest United Ways data the “biggest drivers of cost increases for families since the end of the recession are health care (up 99 percent), transportation (25 percent) and child care (14 percent).”

One third of the households headed by adults 45 to 64, the prime earning years, are having trouble making ends meet, a 22 percent spike.

“Four counties — Morris, Union, Salem and Camden — had the largest increases of 25 percent or more in the number of families struggling to afford the basics,” according to the United Way.

This is a cross the board slide being felt in every county that was years in the making while so much of the political class in Trenton and Washington did the bidding of their wealthy donors, ignoring the deteriorating circumstances of the people that most needed their attention.

This article first appeared in InsiderNJ.