What Jefferson, Trump and the American people think about freedom of the press

Americans overwhelmingly reject restriction on the press, but they doubt the sincerity and impact of the news cycle 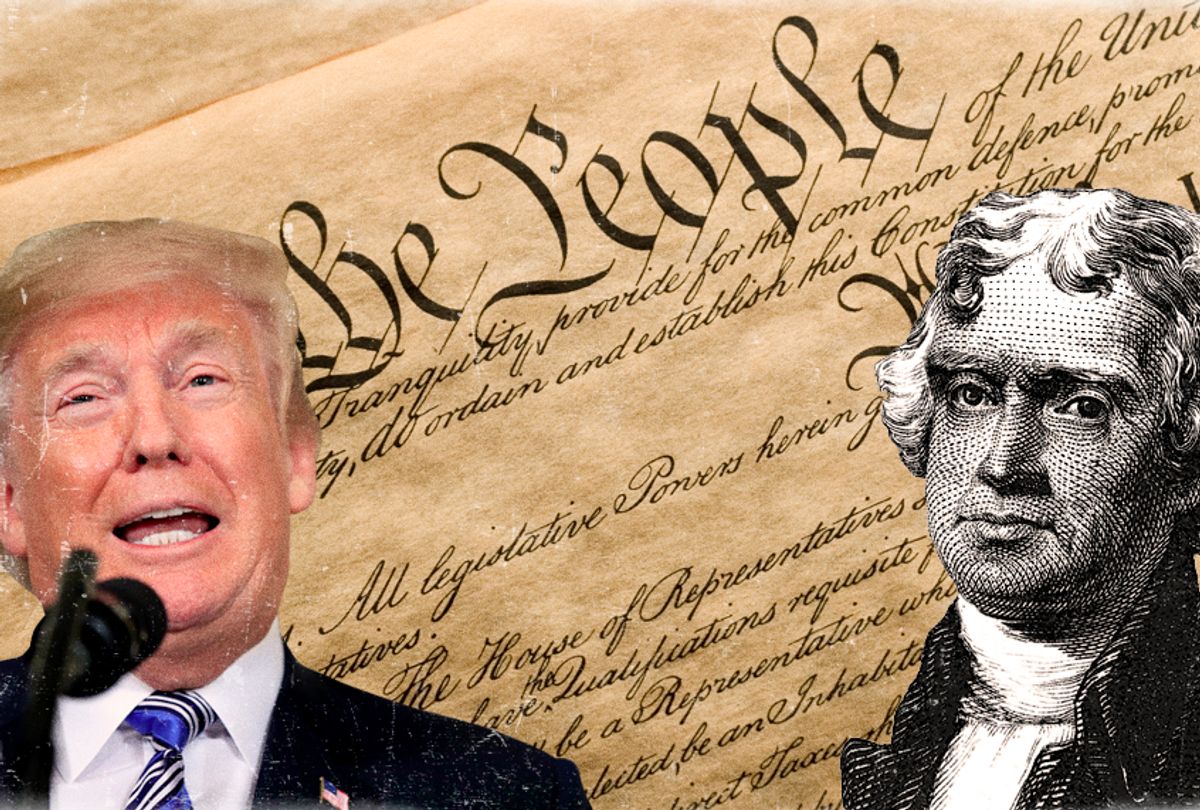 “No government ought to be without censors and where the press is free no one ever will,” wrote Thomas Jefferson to George Washington.

It is a powerful description of press freedom and the crucial role of the press in a democracy.

Here Jefferson sees the press as “censors” in the ancient Roman sense: They guard against the abuse of public authority. And according to a recent USC Dornsife/LA Times Poll, today’s Americans agree with this Jeffersonian ideal.

Overwhelmingly, Americans reject government restrictions on the press. At the same time and in ways that reflect our nation’s fragmentation, they are divided about the sincerity and the impact, even the potentially dangerous impact, of President Trump’s assault on the press.

The poll was conducted by USC Dornsife’s Center for Economic and Social Research and the Center for the Political Future between Aug. 11 and Sept. 24, 2018, among a national sample of 5,045 adults.

First, the survey elicited a response that will gratify the news media. We asked survey respondents to choose between two statements:

A mega-majority of respondents – 85 percent – chose the first statement, including 81 percent of those who describe themselves as tending to agree with Republicans.

The view that government should exercise authority over the news media commanded minimal assent – just 15 percent. And that 15 percent was dominated by groups who form Trump’s core support: primarily white, male, less educated and living in rural or suburban locations.

Presumably Jefferson would be happy with these results, but he probably would be disturbed by some of the other results in the survey.

To Jefferson, the Bill of Rights, with the First Amendment’s guarantee against “abridging freedom of speech, or of the press,” was a foundation of our democracy.

President Trump’s characterization of the media as “enemies of the people” is at war with that conception – and the research shows that the Trump assault is having a corrosive effect.

We were interested in finding out to what extent the public assumes the president himself believes that parts of the press are enemies of the people. Or did they think the president is merely expressing frustration about his own press coverage – in essence, blowing off steam.

Overall, the public split 55 percent to 45 percent, with the majority thinking the president was just venting.

Americans who tend to side with Democrats were more likely – 57 percent to 43 percent – to say that the president doesn’t intend his remarks to be taken literally. Those who side with Republicans were nearly evenly split between those who believed that Trump was serious and those who believed he was not speaking literally. Unaffiliated voters were similarly split.

Whatever Trump’s intentions, a Quinnipiac poll in early September found that the president’s anti-press barrage is having an impact.

Approximately 1 in 5 registered voters overall – but just under half of Republicans in that poll – said they believe that at least some members of the media are in fact enemies of the people.

So it’s possible, perhaps even likely, that some respondents may agree with Trump’s characterization of the media when it comes to the outlets they distrust, while internally exempting their favorite sources.

This finding echoes other recent polling indicating that more than 40 percent of registered voters were concerned that Trump’s criticism of the media could spark violence against people who work in the news media.

In sum, Americans are overwhelmingly committed to a free press and hostile to government restrictions.

But what does it mean to the U.S. that so many think the president is inciting violence against the press, while his own partisans disagree by a massive margin? Will the president pay a political price for this?

Perhaps it’s useful to remember, as The Washington Post has recounted, that Jefferson himself was not steadfast to his own ideal.

In 1806, in the midst of his second term, he wrote to a Massachusetts congressman: “As for what is not true, you will always find abundance in the newspapers.” He also urged “state attorney generals in New England to prosecute newspaper editors for sedition,” according to the historian and Jefferson biographer Joseph Ellis.

Other presidents, indeed most of them, have had their complaints about the press. But freedom of the press has endured as a central American value.

Our poll’s finding that Americans believe that freedom of the press should be maintained is as close to a consensus as we get in America today. Americans’ belief in the crucial role of the press – and the need to protect its practitioners – still exists, even in the face of the president’s relentless attempts to discredit the news media.<!-- Below is The Conversation's page counter tag.