Egged on by John Bolton, Trump and Putin may remove all limits on nuclear missiles. Seriously, what could go wrong? 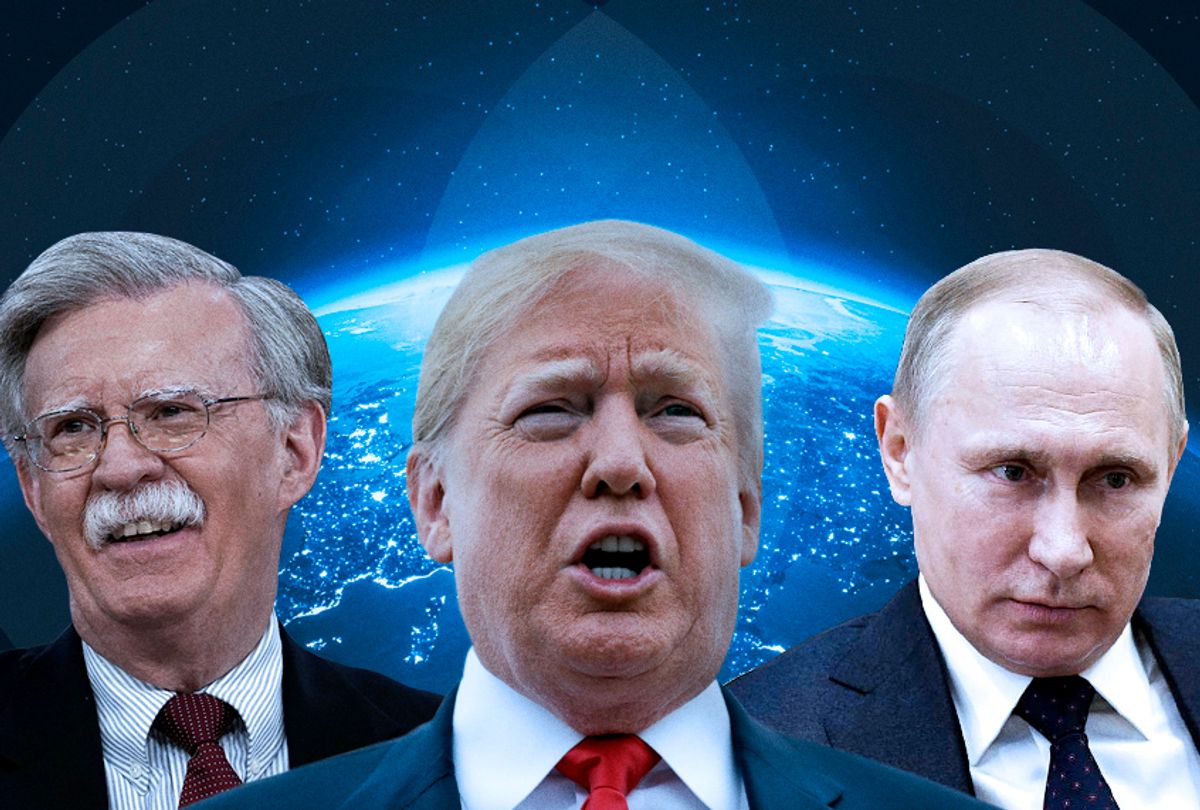 We are a less than two weeks away from an extremely important election and President Trump is on a roll, flooding the zone with nonstop rallies and press avails. His falsehoods and exaggerations have reached unprecedented levels, which is really saying something.

The Washington Post reported that Trump has the administration constantly scrambling, after the fact, to produce policies and reports to fulfill his off-the-cuff impulses and whims. The most obvious example would be the "middle-class tax cut" that nobody had heard about, but which he claimed he had people working "around the clock" to deliver before the election. This stuff happens all the time.

He seems like a mad king, issuing absurd orders which his minions and henchmen all rush to fulfill. In the case of the idiotic "Space Force," it's actually happening and it's even dafter than we originally thought. On Tuesday the Post's Robert Costa interviewed Vice President Mike Pence and asked him if they were planning to nuclearize space. He didn't deny it.

"What we need to do is make sure that we provide for the common defense of the people of the United States of America, and that’s the president’s determination here,” Pence said in an interview with The Washington Post, when asked whether nuclear weapons should be banned from orbit.

What could go wrong? It's not like these things ever fall out of the sky. (Well, actually they do.)

There's a treaty banning weapons of mass destruction in space dating back to 1967, which Pence claimed nonetheless gives countries a lot of flexibility. He said, "At this time, we don’t see any need to amend the treaty." Trump could decide to withdraw from it in a fit of pique, of course, which is probably why Pence was so noncommittal. There is no such thing as a commitment by the United States of America anymore. And the man does love to tear up a treaty.

Just this week Trump announced that he plans to terminate the Intermediate-Range Nuclear Forces (INF) Treaty, which was signed by President Ronald Reagan and Soviet leader Mikhail Gorbachev in 1987. Washington and Moscow agreed not to field ground-based cruise missiles capable of flying between 310 and 3,400 miles. It was a big deal leading to both countries destroying thousands of nuclear missiles and launching facilities.

In recent years, Russia has been accused of violating the treaty. There has been a lot of back and forth about that in recent years and there's room for reasonable debate about the future of this treaty. Needless to say, Trump (who reportedly wondered why we shouldn't bring the number of nukes back up to where they were in the 1960s) is eager to build a whole new nuclear arsenal because he believes that will scare all the other countries into destroying theirs. That's evidently how he thinks the world works. National Security Adviser John Bolton, on the other hand, just believes arms control agreements are for suckers and wants to get rid of all of them. He's been calling for the U.S. to abrogate this INF treaty for years.

The Russian government might be very happy for the U.S. to terminate the agreement. That way Vladimir Putin's regime can go about its own arms buildup while pretending its officials were responsible statesmen compared to those nuts Trump and Bolton. But I wouldn't be surprised if Putin had something even craftier up his sleeve.

Trump always mentions that arms control is one of the topics he and Putin discuss on the phone and in person. For instance, recall that after the infamous "congratulations" call Trump wasn't supposed to make, he said, “I had a call with President Putin and congratulated him on the victory, his electoral victory. The call had to do, also, with the fact that we will probably get together in the not-too-distant future so that we can discuss arms, we can discuss the arms race. As you know, he made a statement that being in an arms race is not a great thing."

The surprise summit in Helsinki came soon after. Several weeks later, Politico published a leaked Russian document listing proposed topics for that private meeting which was headed “Dialogue on the Issue of Arms Control." Whether or not this was "leaked" with intention is unknown and the motives for doing that are not entirely clear. In any case, the Russian reaction to the leak was a bit too histrionic to be believable considering how anodyne the document was. It was odd.

We know that Trump can't find it in himself to criticize the Russian leader. He's simply been incapable of it. So what are we to make of the "trash talk" he threw out on his way to Marine One the other day?

Q: Mr. President, are you prepared to build up the U.S. nuclear arsenal? You said you’re going to pull out of the arms deal.

Q: Is that a threat to Vladimir Putin?

Does that sound like anything Trump has ever said about Putin before?

Bolton has been in Russia this week and announced on Tuesday that the president would meeting with Putin in Paris right after the midterm elections,  for the big military parade Trump loves so much. The press seemed confused: What could possibly be the point of another meeting between these two at this point?

Who knows? Trump loves these face-to-face meetings and Putin seems to understand that. Maybe there's nothing more to it. But I would not be surprised if they have already decided to "announce" that they are terminating the INF agreement (and possibly others as well) but have agreed to a major arms control agreement that will put all those previous agreements to shame! It would be modeled on that extraordinary meeting of the minds between Trump and Kim Jong-un, only bigger and better.

They won't offer any details, of course. Who needs that when they have a beautiful letter of intent that means absolutely nothing? All Trump will have to do is tear up all the previous treaties and tell his base that he's ended the nuclear threat and that will be the end of that. It's worked out well for Kim, why not for Putin?

Obviously, I have no idea whether that's the plan. If it is, the next Congress might have something to say about it. But just the fact that it's plausible is terrifying enough.