No GOP candidates showed up to a rally that Steve Bannon purportedly held on their behalf: report

That includes Chris Collins, an indicted congressman vying for re-election after being charged with insider trading 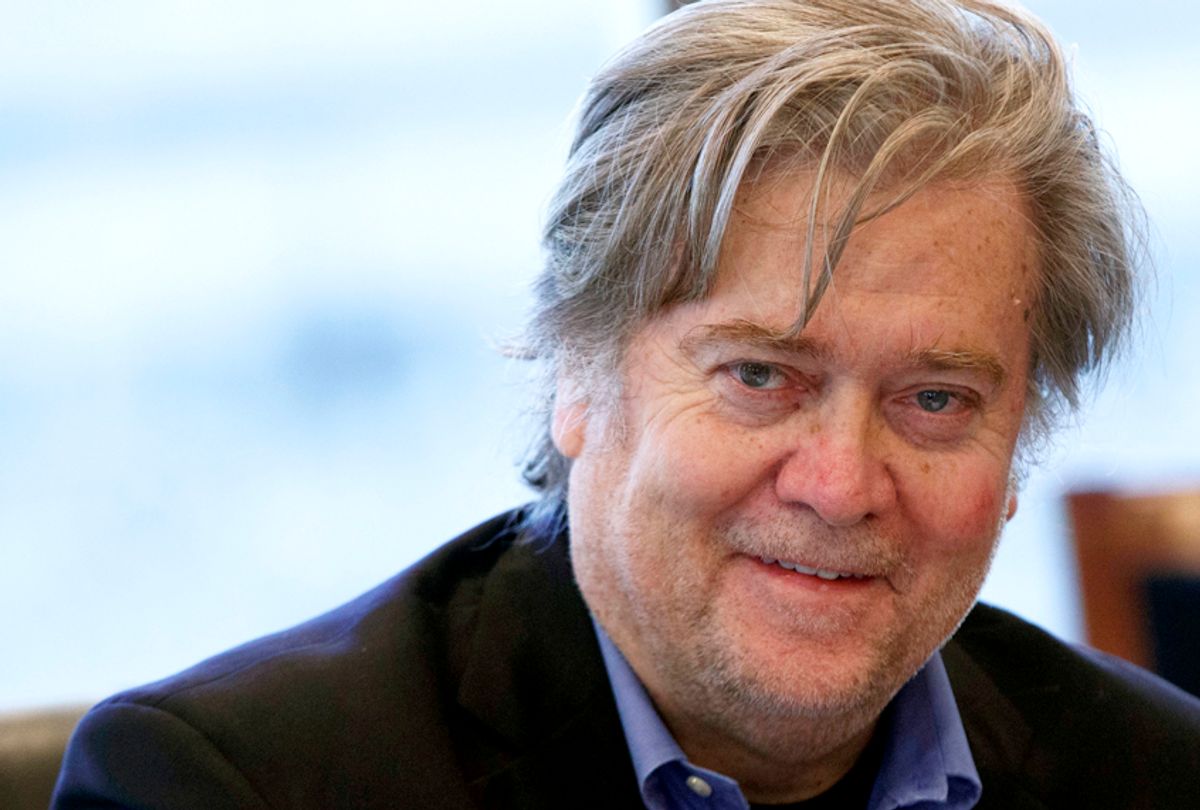 After an extensive tour in Europe, working alongside Belgian politician Michael Modrikamen to promote populism ahead of the major European elections in May 2018, Steve Bannon is back stateside – and the reception seems far from a hero's welcome.

On Monday, Bannon touched down in Staten Island for a screening of his documentary, “Trump at War." During the 2016 election, Staten Island was the one borough in New York City that voted overwhelming in favor of President Donald Trump. However, a mere 38 people reportedly attended the event.

Bannon told New York Daily News that he did not mind the small crowd, because most were “grassroots leaders” who will get out the pro-Trump vote in the midterm elections. Since being fired from the Trump administration in August 2017, Bannon said he has spoken at six events where there were only 10 attendees, according to The News. “This is all about human contact,” he said. “This is about getting grassroots people excited to either walk precincts, to work phone banks, etcetera.”

At a second appearance in New York state on Wednesday, Bannon purportedly spoke before 200 people at a firehouse upstate near Buffalo in support of GOP candidates running in the upcoming midterm election. However, no one running for office bothered to show up, according to The Guardian. That list includes Chris Collins, the indicted U.S. representative vying for re-election after being charged with insider trading.

For Bannon, the fire and the fury was seemingly forgotten as he recalled how he successfully helped Trump win the 2016 election. In fact, The Guardian billed the first part of the former White House staffer's speech as "an apparent attempt to thrust himself back into the national spotlight."

“When I came into the campaign as CEO in mid-August, we were down, what – eight, 10, 12, 16 points – double-digits down in every battleground state," Bannon was quoted as saying. "Not a lot of money, not a lot of organization.”

Bannon’s closing remarks brought home that populist message that scored big in 2016. “If you gave me the choice between the first hundred people who showed up here at Jamison firehouse today in a red ball cap to govern the country or the top hundred partners at Goldman Sachs, I would take these red ball caps every day,” Bannon said to the crowd.

“Think about what the country would be if we took the first hundred of you and you made the decisions,” he added. “Well, that’s the closest we’ve got with Trump.”

That being said, Bannon did not mention that he was a former vice president at Goldman Sachs or that Trump's Cabinet "appears to be the richest in modern U.S. history, worth nearly $4.3 billion in aggregate," according to Forbes.