Iowa Rep. Steve King spells out his racist worldview with an Austrian neo-fascist 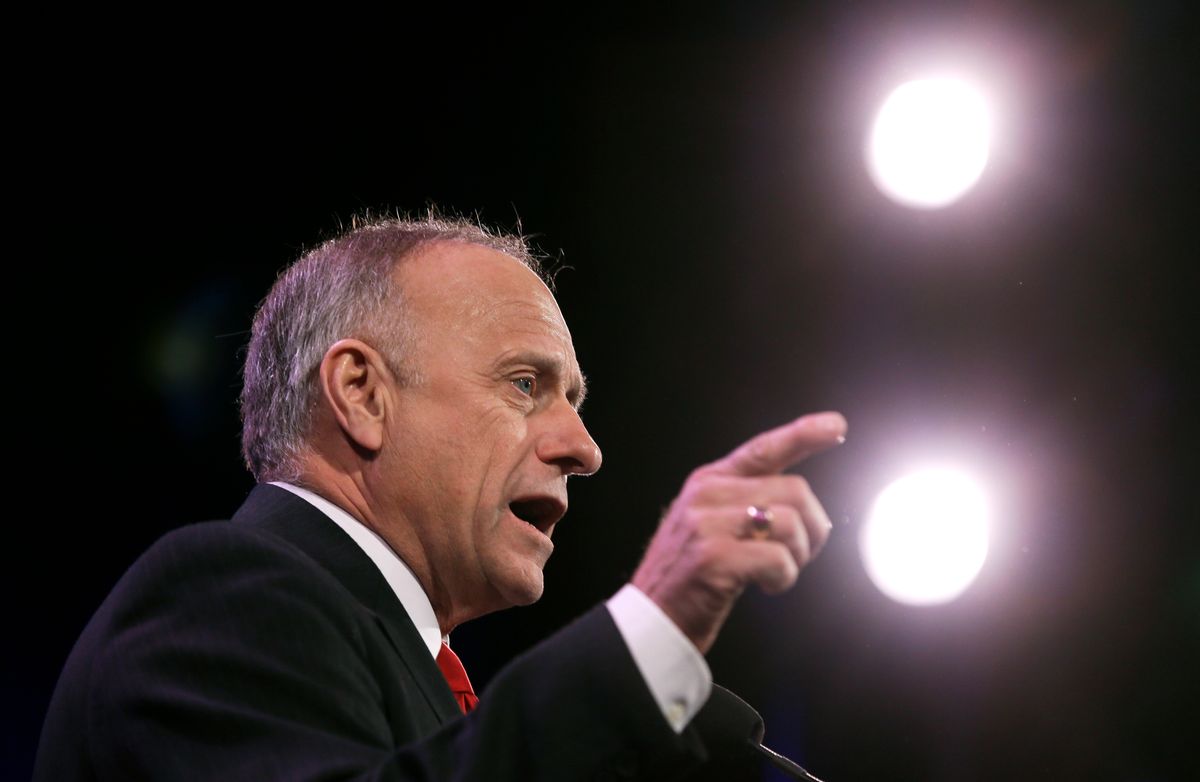 Sometimes it is worth listening to those on the edge, even the far, opposing edge, just to remember where the American majority stands.

There is a lot of media talk about Rep. Steve King (R-Iowa) because he gave an interview – another in a series over years – to a far-right Austrian publication in which he spelled out, in clearer and more shocking terms than he ever has before, his white nationalist worldview.

King’s position is nothing new for the eight-term congressman, who, of course is up for re-election in a couple of weeks, but doing so in an interview with Caroline Sommerfeld, a prominent part of Europe’s neo-fascist thinking in the Austrian far-right propaganda site Unzensuriert (which means “uncensored” in English), just underscores how far adrift we are getting.

It should serve as a reminder to us that we need to act to keep King’s style of racism from becoming part of the norm in our society. And yet, there’s no criticism from Republican leadership, no denunciations of the type leveled against a would-be Republican congressional candidate of neo-Nazi roots in Illinois. Rather, his views are ignored or seen within a larger set of acceptable bounds. And so, we should take notice.

In the interview, King discussed his belief in the superiority of European culture, decried falling fertility rates in the West, and said that Europe and America are threatened by Muslim and Latino immigration. “If we don’t defend Western civilization, then we will become subjugated by the people who are the enemies of faith, the enemies of justice,” King said.

Remember, not only is this a sitting U.S. congressman but a leader in Republican circles and enough of a force in the ever-purifying Republican House that leaders there no longer call him out for despicable statements.

According to The Huffington Post version of the interview, King’s remarks largely revolve around the paranoid idea of the Great Replacement — the belief that mass migration, particularly from Muslim-majority countries, is an extinction-level event for white European culture and identity. Or as he put it in the interview, a “slow-motion cultural suicide.”

“The U.S. subtracts from its population a million of our babies in the form of abortion,” King said. “We add to our population approximately 1.8 million of ‘somebody else’s babies’ who are raised in another culture before they get to us.”

It’s a phrase widely used by anti-Muslim European networks to refer to the supposed Islamification of Europe by migrants and refugees and heralded in a book called The Camp of the Saints, a stunningly racist 1973 novel by Jean Raspail that envisions the world undergoing the fight to the death between races.” King even said George Soros, the billionaire philanthropist and bogeyman of the far right, might be paying for the Great Replacement.

Last year, Austrian intelligence services found that Unzensuriertis known in Austria for routinely publishing Islamophobic, anti-refugee articles, promoted anti-Semitism and extreme xenophobia. The site also spreads misinformation and conspiracies. The site has close ties with the far-right Freedom Party, or FPO, and its former editor-in-chief is now the head of communications for the Ministry of Information.

King’s nativist rhetoric has not prevented him from becoming an incredibly important figure among conservatives, said Vox magazine. As National Review wrote in 2015, “The outspoken congressman commands tremendous influence among conservatives who agree with his staunch stances on immigration, abortion, and same-sex marriage, especially in his western Iowa district.” The Washington Post has said that “King himself has, over the past few years, established himself firmly as the most passionate congressional opponent of immigration and defender of the white demographic majority in the country — a statement that bears certain implications that, by now, are all but unavoidable.”

Generally, a review of King’s record shows that the congressman is among the most strident speakers against abortion, for extending more gun rights, and against same-sex marriage – a decision for which he called for Supreme Court justices to resign. He has opposed health care, aid for Katrina victims, any bills for economic stimulus and any regulations that would trim lobbyists’ rights.

In the presidential election, he supported Ted Cruz before backing Trump.

At a 2016 panel, King said, “This whole ‘old white people’ business does get a little tired, Charlie. I’d ask you to go back through history and figure out where are these contributions that have been made by these other categories of people that you are talking about? Where did any other subgroup of people contribute more to civilization?” King is a staunch opponent of immigration and multiculturalism.

King displayed the Confederate flag on his office desk, despite the fact that Iowa was part of the Union during the American Civil War. He removed it after a Confederate flag-waver shot two Iowa police officers. In 2014, King compared the torture and prisoner abuse at Abu Ghraib prison to “hazing.”

In 2010, King supported racial profiling as an important component of law enforcement and has preached for the adoption of English as the official language of the country.

It goes almost without saying that he is a wide favorite for re-election in November.