Trump sends military to meet an economic exodus to our border, ignoring the poor at home

Cesar Sayoc Jr.'s circumstance proves the greatest danger to our security may be ignoring the growing underclass 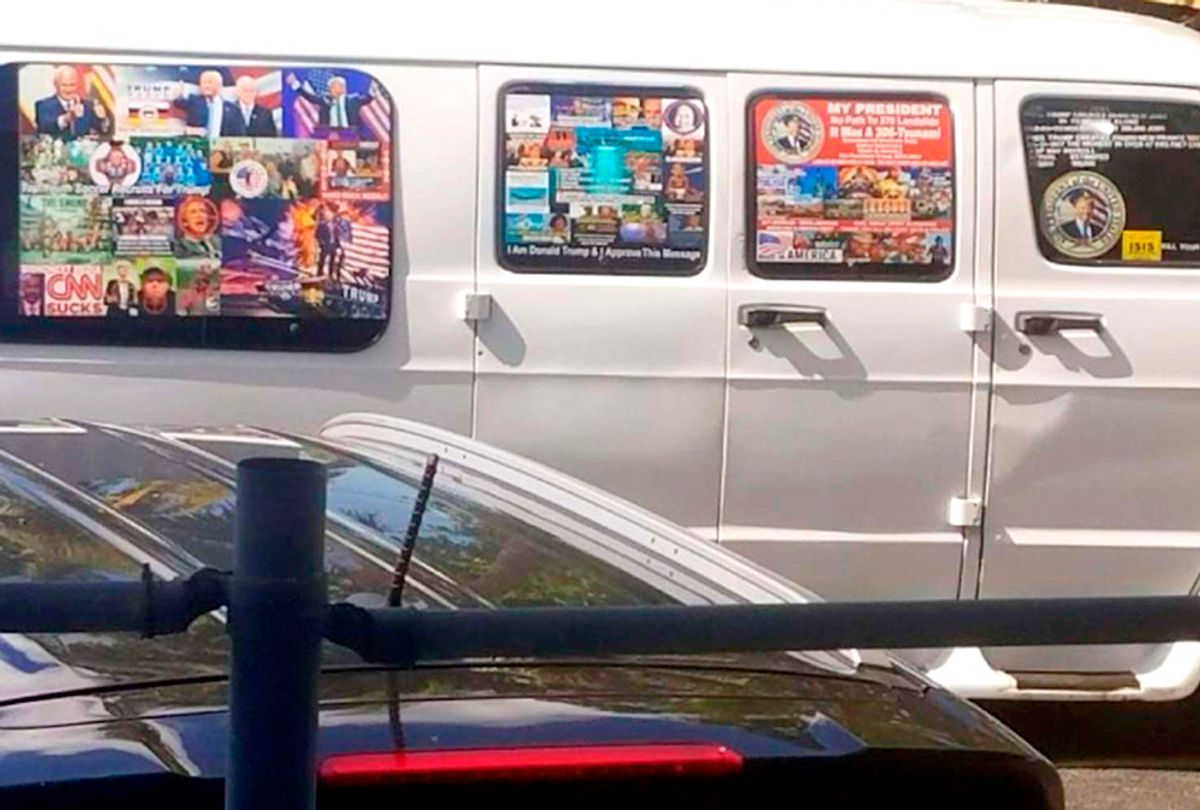 This Nov. 1, 2017, photo shows a van with windows covered with an assortment of stickers in Well, Fla. Federal authorities took Cesar Sayoc into custody on Friday, Oct. 26, 2018, and confiscated his van, which appears to be the same one, at an auto parts store in Plantation, Fla., in connection with the mail-bomb scare that has targeted prominent Democrats from coast to coast. (Courtesy of Lesley Abravanel via AP)
--

While the President sends the military to seal the southern border from the external “terrorist threat” caused by thousands of immigrants heading north to escape poverty and violence it turns out that last week the most clear and present danger to our republic was a homeless middle aged American male living in his van.

Initial press reports indicate the bomb making suspect, 56-year-old Cesar Sayoc Jr., was part of the growing underclass  of Americans, unmoored from work or family, living on the margins, moving the vehicles they live in as required.

In 2009 he reportedly lost his home to foreclosure. Three years later he filed for bankruptcy and in his middle years moved back into his mother’s house.

His criminal record in Florida includes a 2002 bomb threat to which he pled guilty. In  2014 he was arrested after he allegedly got caught trying to steal $239 worth of stuff from a Walmart.

Richard Simonson, a Florida attorney, who handled  Sayoc’s bankruptcy, told the Daily News that  in 2011 he was flat broke.

“Like a lot of people at the time, he was unemployed because of the downturn in the economy,” Simonson told the Daily News. “He didn’t have any money. It was a straight bankruptcy. The guy didn’t have any assets.”

Based on his social media profile it was President Trump’s rantings and ravings about the evil Democrats that gave his life dimension and meaning. No doubt, hating who Trump hated made him part of something dynamic and bigger than life.

We have seen this movie before.

Like Sayoc, Hodgkinson had an arrest record and was homeless, living out of his gym bag taking showers in a local gym.

In Hodgkinson’s case, former Alexandria mayor Bill Euille even engaged the would-be shooter regularly in the morning for several weeks before the shooting in an effort to help the man find a job.

The Washington Post reported that Hodgkinson was a prolific letter writer to his local Illinois newspaper, bemoaning income inequality and calling for higher taxes for the one percent.  “A strong middle class is what a country needs to prosper,” he wrote in one of his letters to the editor of the Belleville News-Democrat. “The only thing that has trickled down in the last 30 years came from Mitt Romney’s dog.”

Lots of people have financial reversals and become alienated from their families and don’t act out in such a spectacular and violent fashion like Sayoc and Hodgkinson. Drugs and mental illness can all be in the mix.

This is not about political ideology but what happens when our sense of community deteriorates to the point where we have no sense of who is living in the "odd van" and don’t particularly feel moved to find out.

It is not unlike the  recent spate of suicides in New York City by drivers for hire to protest the economic race to the bottom in the laissez faire economy of uber world — individual despair that’s a sign of a broader dislocation.

For the first time since the Great Recession homelessness is trending back up. Last December the U.S. Department of Housing and Urban Development’s annual Point in Time count identified 554,000 homeless people, a one percent uptick from 2016.

In this stage of late stage vulture-capitalism we are in there is something simmering out there off the media radar — a growing army of walking wounded we leave to their own devices.

No, these days the greatest threat to public order isn’t coming from south of the border. It’s this disintegration of community from within.