Long before Jamal Khashoggi, mainstream media insisted that Saudi money had bent American policy to its will 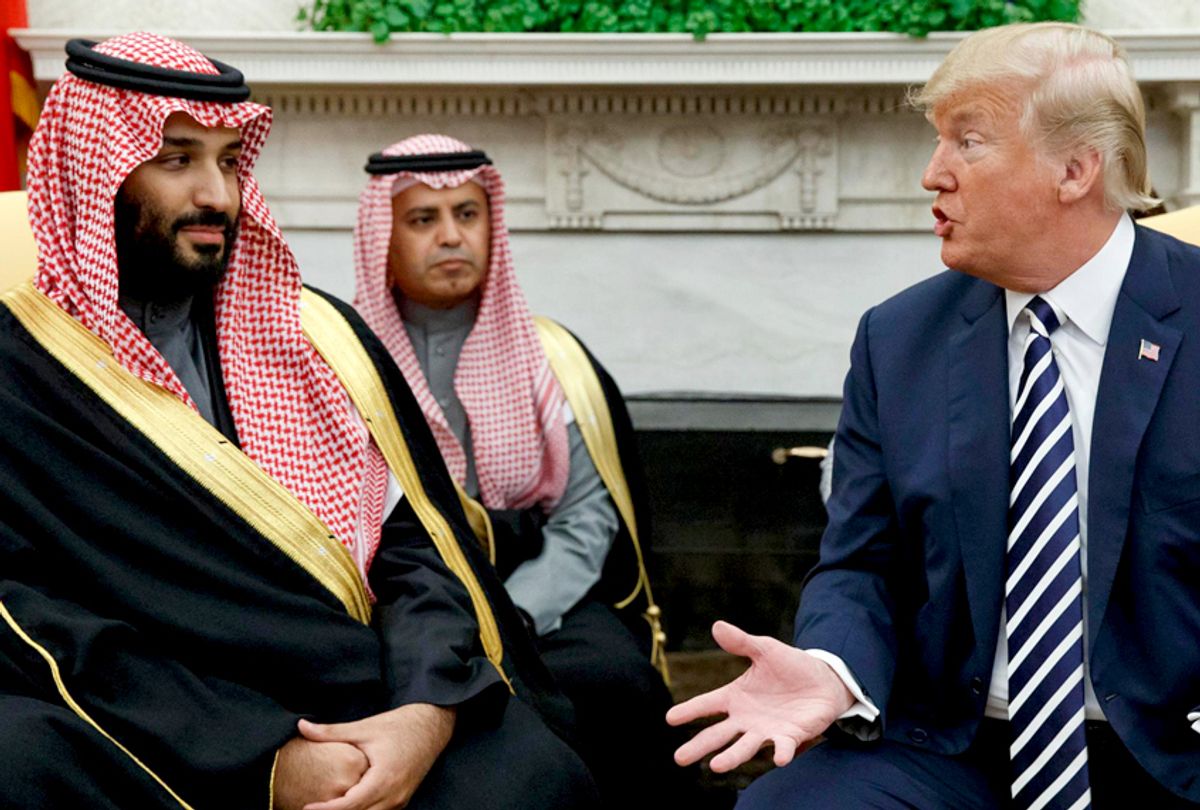 As FAIR has noted for years, one of the primary ideological functions of U.S. corporate media is to maintain the mythology that the U.S. is a noble protector of democracy and arbiter of human rights. When material facts — like wars of aggression, massive spying regimes, the funding and arming of right-wing militias and the propping up of dictators — get in the way of this mythology the response by most pundits is to wave away these inconsistencies, ignore them altogether or spin them as Things That Are Actually Good.

There is, however, another underappreciated trope used to prop up this mythology: that the U.S. political class does bad things, not because bad things serve U.S. imperial interests, but because they’re corrupted by sinister foreign actors.

As more information about Washington Post columnist Jamal Khashoggi’s brazen murder at the hands of the Saudi government comes to light, some in the U.S. press are positioning Saudi Arabia as having “corrupted” Washington—as Khashoggi’s own editor lamented on Twitter last week. It’s a reassuring narrative, and one that will likely grow increasingly popular in the coming weeks: The Saudis have “corrupted,” “played” or “captured” an otherwise benevolent, values-based U.S. government.

While it’s refreshing that some are starting to challenge the United States’ grotesque alliance with the Saudi theocratic monarchy, it’s important to note that it’s not a product of a foreign bogeyman, but core to the U.S. imperial project. Historically, the U.S. hasn’t embraced despotic regimes despite their oppressive nature, but precisely because of it. 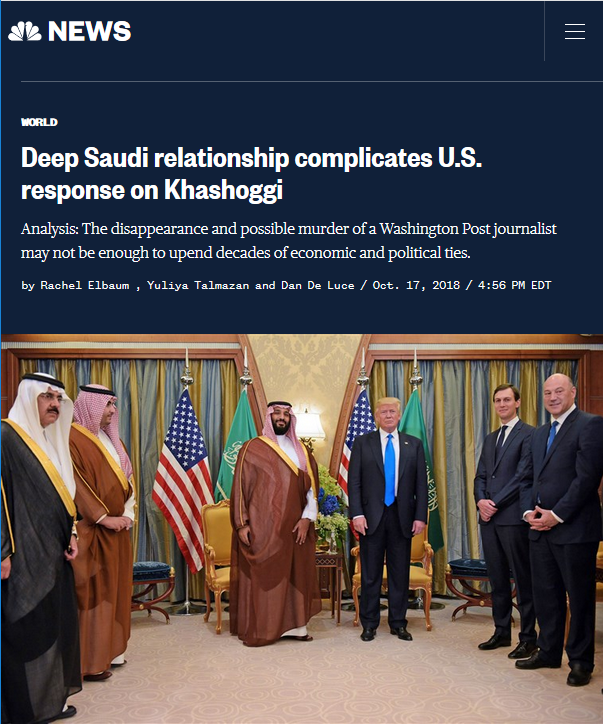 In a report on why Khashoggi’s killing was unlikely to fundamentally alter the U.S.-Saudi relationship, NBC News casually threw out this highly contestable claim:

Adam Coogle, a Middle East researcher with Human Rights Watch, said the longstanding economic and security ties with Saudi Arabia have forced the U.S. to tolerate a lot of questionable Saudi behavior.

It’s difficult to tell if the words spoken are those of Coogle or NBC reporters Rachel Elbaum, Yuliya Talmazan and Dan De Luce, but the reader is left with the same net effect: Due to “economic and security ties” somehow outside of its control, the most powerful country in the history of the world is “forced” to “tolerate” what’s called “questionable” behavior — a phrase that sweeps together the wholesale destruction of Yemen, the beheading of dissidents, the disappearing of women drivers and the brutal murder of Khashoggi. (In the case of Yemen, to “tolerate” means, among many other forms of active support, providing targeting instructions for a vicious airstrike campaign.)

Can one imagine NBC News or a Human Rights Watch researcher ever saying, “The longstanding economic and security ties Russia has with Syria have forced Putin to tolerate a lot of questionable behavior from Assad”? It’s an agency-free, blameless construction, reserved only for the United States. Similar to how the U.S. never chooses to go to war, but is constantly “stumbling” into it, Washington always means well, but can’t help engaging in large-scale, highly sophisticated mechanized violence.

Vox’s Matt Yglesias joined the revisionism, writing, “The realities of Cold War politics got us involved in deep, long-term cooperation with a Saudi state that is not otherwise a natural partner for the United States.” Never mind that the U.S.-Saudi partnership predates the Cold War by about 15 years, the idea that dictators or sectarian regimes in the Middle East aren’t “natural partners of the United States” — especially during the Cold War — is a total fiction. 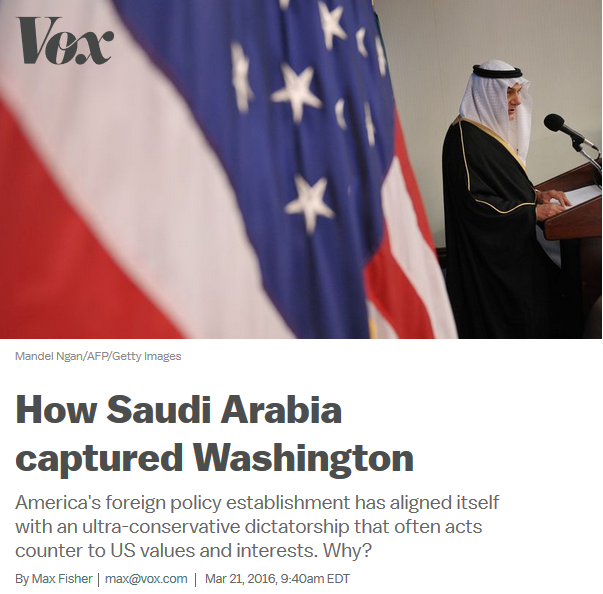 The trope of foreign corruption of the innocent empire, of course, predates Khashoggi’s death. Vox’s Max Fisher insisted in March 2016 that Saudi Arabia has “captured” Washington, and this was the reason “we” had strayed from “our values.”

The article treated the U.S.-Saudi alliance as some kind of mystery, rather than the logical outgrowth of a cynical empire that is not motivated by human rights but uses them for branding. “America’s foreign policy establishment has aligned itself with an ultra-conservative dictatorship that often acts counter to U.S. values,” Fisher insisted. What “values” are those? He never really explained, but went on:

What explains the Washington consensus in favor of Wahhabist autocrats who often act counter to American values and interests? Some in the Obama administration, based on what they told the Atlantic (and on my own conversations with administration officials), seem to believe the answer is money: that Saudi Arabia and other oil-rich Arab states have purchased loyalty and influence.

Clearly Saudi money — like pro-Israel money — has influence around the margins (or else, one assumes, they wouldn’t spend it), but the idea that the U.S. wouldn’t be backing violent dictatorships if it wasn’t corrupted by some sinister foreign actor has no historical or empirical basis. U.S. backing of Saudi Arabia predates its current public relations machine by decades, a machine that exists largely to influence the scope and depth of the U.S.-Saudi alliance, not the fact of it.

Fisher even vaguely acknowledges this (“no one is ordered by foreign funders to express a certain viewpoint. Rather, they described a subtler role, in which money amplifies preexisting norms and habits that favor a pro-Saudi consensus”), but this undercuts his thesis entirely — that Saudi Arabia somehow undermines America’s “values” rather than manifests them. But Fisher doesn’t appear to earnestly be trying to understand the nature of this alliance; he appears to be tasked, instead, with ameliorating cognitive dissonance, with preserving U.S. human rights mythology by treating it as a foreign-contrived anomaly, rather than a natural extension of a largely violent and arbitrary global empire. Then comes the kicker:

What Americans? Where? The Obama White House at the time, as Fisher notes in the next paragraph, backed the war entirely. So who are these mysterious Americans whose “judgment” is against the Yemen war? He never says. These good, wholesome Americans who believe in U.S. “values” are somehow never in charge, but are nonetheless always being corrupted by dastardly foreign actors.