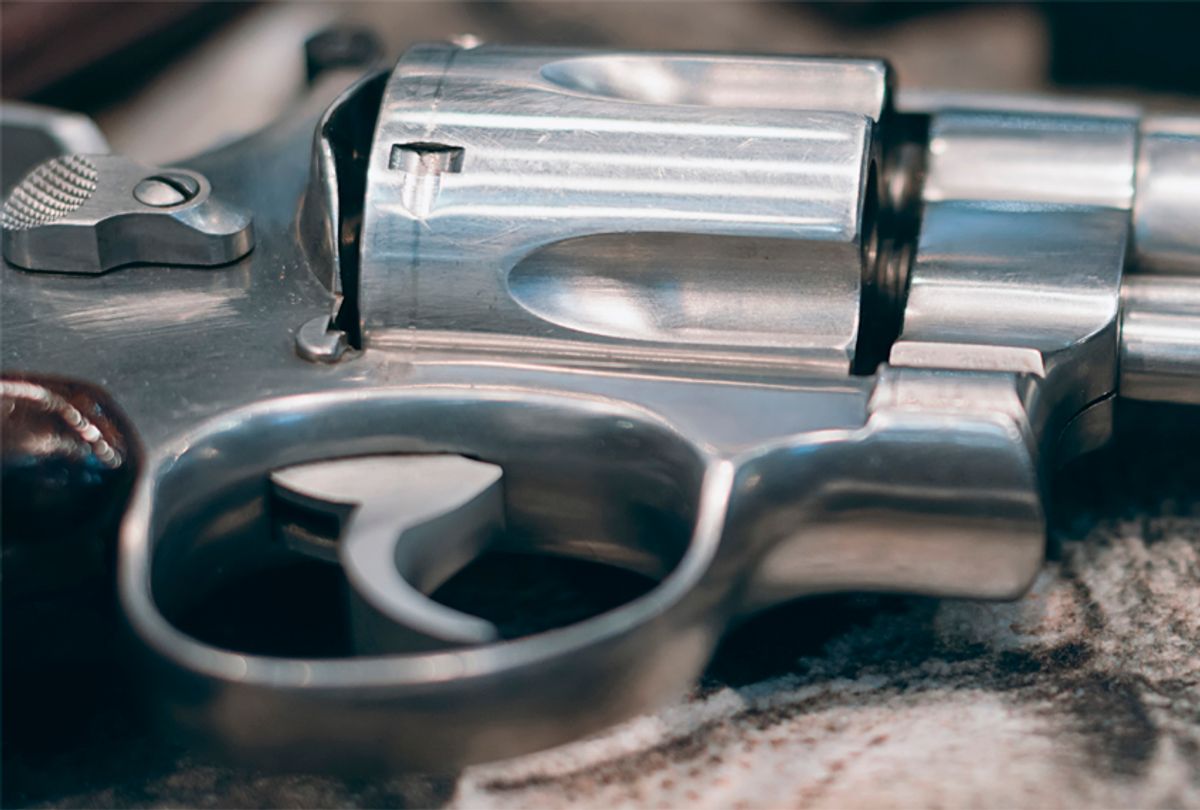 A conviction for domestic violence in the U.S. strips a person of the legal right to possess a gun. It doesn’t matter if the conviction is a misdemeanor or a felony. The rationale for the federal law: Domestic violence is a red flag for future violence — including potentially deadly violence with a firearm.

Scientific and anecdotal evidence suggests that a person who abuses animals also has a higher likelihood of hurting other people. And that insight has begun fueling a push, at the state and federal levels, to slap a no-gun penalty on anyone convicted of animal cruelty.

“As we look at some of the recent mass shootings from Columbine to Parkland to Sutherland Springs, these perpetrators had a history of animal abuse. Addressing this pattern of behavior is a part of the solution for preventing gun violence and hopefully saving lives,” said U.S. Rep. Katherine M. Clark, D-Mass., who in July introduced a bill focusing on the issue.

Local officials also are recognizing animal abuse as a human safety issue. A partnership between the New York City Police Department and the American Society for the Prevention of Cruelty to Animals has more than tripled arrests for animal abuse in New York City since its 2014 launch.

Around the country, at least 75 state and local prosecuting offices have personnel specializing in animal abuse, according to a list provided by the National Link Coalition, an advocacy group formed a decade ago by activists concerned about the apparent connection between animal abuse and family violence. In May, for example, the San Diego District Attorney’s Office began rolling out its Animal Cruelty Prosecution Unit. Tracy Prior, deputy district attorney and chief of the office’s Family Protection Division, which is overseeing the new unit, plans to work more closely with law enforcement partners to try to prosecute more animal cruelty crimes.

The logic of such initiatives, as National Link Coalition coordinator Phil Arkow put it, is that “investigating animal cruelty cases aggressively . . . can also stop other violence including child abuse, domestic violence and elder abuse.”

Current federal law already bars felons from having a firearm, but many animal cruelty crimes — even those that involve torture and mutilation — are prosecuted as misdemeanors. Clark’s bill  would step up enforcement by forbidding anyone with a misdemeanor conviction for animal cruelty from possessing a gun. Clark is favored to win reelection on Nov. 6, and, if the bill doesn’t pass this year, she plans to reintroduce it in the next Congress.

Similar legislation was introduced earlier this year in New Jersey, and the Illinois State Crime Commission has recommended a state ban on gun ownership by all convicted animal abusers.

Jerry Elsner, executive director of the crime commission in Illinois, said he also expects to encounter strong opposition by gun rights groups. His agency will seek sponsors after next month’s elections for a bill to bar gun possession by convicted animal abusers.

The Illinois State Rifle Association and the National Rifle Association fought bills to require the surrender of firearms in domestic violence cases before state and federal bans were adopted.  “People didn’t want guns taken away from wife beaters. That wasn’t popular at all,” said Elsner, a registered Republican. But on the animal abuse legislation, he frames his personal position another way: “I’m not anti-gun, I’m anti-animal abuse.”

Neither rifle association responded to requests for comment on calls to bar gun possession by people convicted of animal cruelty.

Federal law enforcement authorities have started to embrace the notion that animal abuse could presage other crimes. In a July report, the FBI, the U.S. Department of Homeland Security and the National Counterterrorism Center declared animal abuse a warning sign for “terrorism and other premeditated violence against humans.” They cited research by the FBI, which found that among adults arrested between 2004 and 2009 for committing acts of animal cruelty, about half were subsequently arrested for another crime.

“It’s going to take three-to-five years, as they collect this new data, to really reveal the clear patterns,” said Clark, the Massachusetts congresswoman. Even so, she said she is confident that existing studies demonstrate that her legislation is needed.

Research has produced some provocative statistics. Animal abusers are five times more likely to commit violent crimes against people than non-abusers, according to a study published in 1997 by Northeastern University and the Massachusetts Society for the Prevention of Cruelty to Animals. The Chicago Crime Commission reported in 2004 that 82 percent of offenders arrested for animal abuse had prior convictions for battery, weapons or drugs. Another  study, in 1999, found that 63 percent of aggressive criminals incarcerated in South Africa had deliberately inflicted harm on animals in childhood. And in a study published in July, the FBI concluded that 60 percent of animal cruelty offenders had also engaged in intimate partner violence, with or without guns.

Before he began killing and dismantling humans, Jeffrey Dahmer did the same with animals, researchers found. According to published reports, other mass murderers, including the “Boston Strangler” Albert DeSalvo, and school shooters such as Kip Kinkel, Eric Harris and Dylan Klebold, also tortured and killed animals in the years prior to their killing sprees.

Of course, not every child who abuses an animal will go on to carry out heinous acts against people. Clifton Flynn, provost at the University of South Carolina Upstate and author of studies and a book on the topic, pointed to criteria that could identify those at greatest risk of committing violence, such as people with multiple episodes of abuse or who carried out more up-close-and-personal cruelty. “If a kid takes a cat and strangles it until it almost dies, then I’d be worried about that kid — more so than a kid who takes a rifle and shoots a squirrel in a tree 50 yards away,” he said.

John Thompson, deputy executive director of the National Sheriffs’ Association and a former police chief in Maryland, said that for 30 years in law enforcement, he was unaware of the link. “I would just call animal control. It wasn’t my problem,” he added. “Law enforcement just doesn’t get it. But that is changing.”

Joye Estes echoed Thompson’s sentiment. She used to investigate sex crimes, child abuse and domestic abuse as an officer with the Louisville Metro Police Department in Kentucky. “I wish I’d had the knowledge about the link back when I was a detective,” said Estes, now a law enforcement investigator for the Jefferson County, Kentucky, public schools.

For 11 consecutive years, the Animal Legal Defense Fund, an advocacy group, has ranked Kentucky last among U.S. states in the strength of its animal protection laws. Among the reasons: humane officers lack broad enforcement authority and it’s very difficult to bring felony charges against animal abusers. Kentucky is also one of the few states where veterinarians are actually prohibited from reporting abuse, according to Animal Defense Fund reports.

Estes, through a group she co-founded in September, the Kentucky Link Coalition, is seeking to raise awareness of the connection between animal abuse and interpersonal violence. “We need to break down silos — to share info between animal control and police and social services,” she said. “Animal cruelty is the most silent crime. Animals never learn to talk, never go to school, never have relatives come to visit or visit friends.”

Meanwhile, more states are passing bills that create — or stiffen — felony provisions for animal cruelty, which could make it easier to bar offenders from possessing guns. In August 2017,  Pennsylvania enacted legislation that added felony-level penalties for first-time aggravated animal cruelty offenses, such as torture.

“Extreme risk protection order” laws are also emerging, which target the gun rights of animal abusers in much the same way as domestic violence offenders. The first such state law, passed in Connecticut in 1999, provides police officers the power to temporarily take away an individual’s guns based on a history of violent acts, drug abuse or animal cruelty. A bill that took effect in Oregon in January now gives a judge the power to weigh factors including convictions for domestic violence or animal cruelty in deciding whether to order a temporary surrender of firearms.

“Based on what we know about those who perpetrate animal cruelty,” said Flynn, “there are good reasons to keep guns out of their hands.”