Lessons from the Museum of the Bible's fake Dead Sea Scrolls: How not to buy looted antiquities 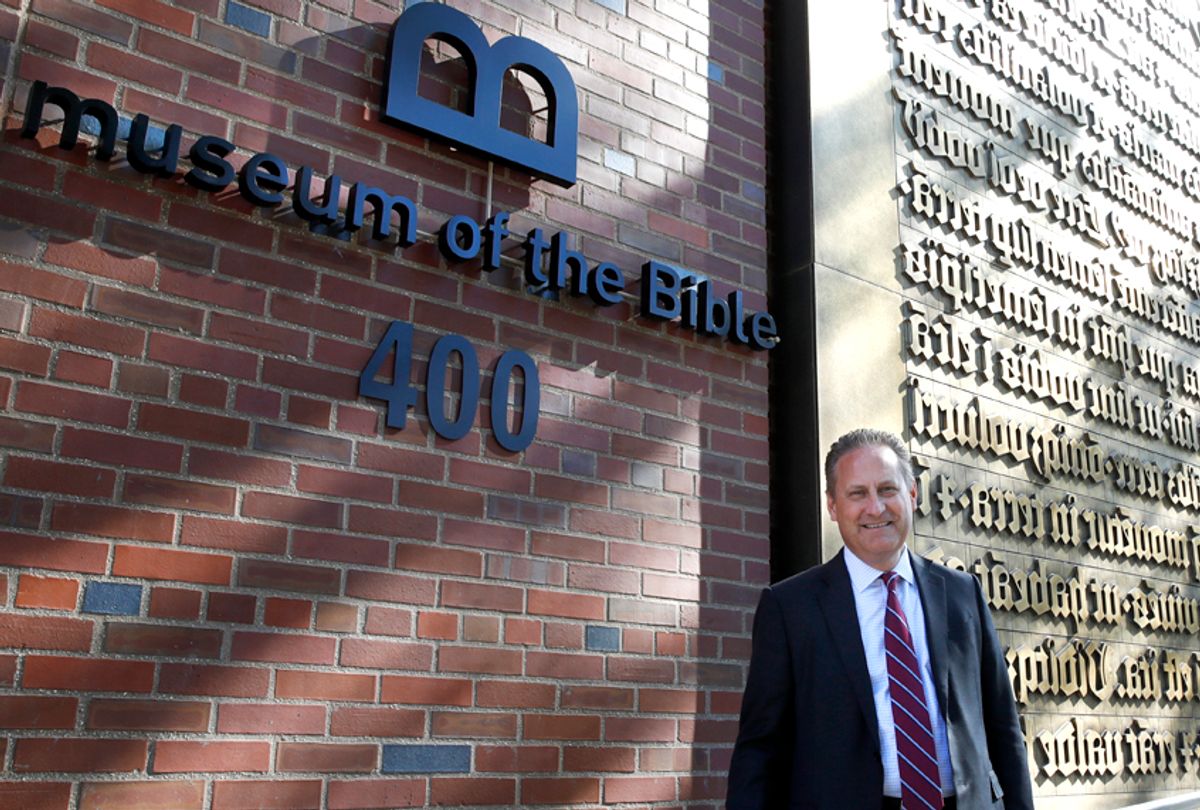 Steve Green, the owner of Hobby Lobby and a founder and major backer of the Museum of the Bible, at the museum, Monday, Oct. 30, 2017, in Washington. (AP/Jacquelyn Martin)
--

It is tempting to feel that some cosmic justice has been meted out to the Museum of the Bible, which recently admitted that five items in its collection that it believed were authentic Dead Sea Scrolls have been tested and are now considered to be forgeries. This came after the decision, in 2017, that the museum’s owners, the Green family of Hobby Lobby store fame (as well as religious fundamentalist fame, having successfully sued the U.S. government because it did not want taxes from its employee health plans to go to contraceptives), had purchased looted antiquities, and were forced to pay a fine and return some 5,500 illicit objects that had been bought by dealers in Israel and the United Arab Emirates in 2010.

Neither of these revelations come as a surprise to those who know how the collection of the Museum of the Bible was amassed. Most of the objects were bought en masse from other collections without knowing (or caring to look too closely) at how they were initially acquired (for a very detailed examination of this, see the impressive detective work of Roberta Mazza, which has been reported at the ARCA Conference on the Study of Art Crime and in numerous other publications, including Biblical Archaeology and my own feature in The Washington Post as well as another for Salon). The Green’s collection and how it was gathered have raised no shortage of eyebrows, and so a bit of schadenfreude can be expected. But kudos to the Museum of the Bible for not trying to cover up the latest scandal, but admitting it, with however much chagrin.

With this in mind, the reasonable question may rise as to how collections and individuals can avoid these sort of problems. We have already delved into how to avoid accidentally buying fakes and forgeries in this column, but what about not accidentally (or on purpose) buying looted antiquities? Here are five tips to take with you on your next trip to an art fair, gallery, auction or even a flea markets on some back streets.

The first thing that you need to know is that, until 1970, the laws about buying cultural heritage objects and exporting them were quite chaotic and irregularly enforced and differed from nation to nation. That is why the 1970 UNESCO convention is so important: It essentially codified and formalized and made more complicated bureaucratically the ways cultural heritage objects could be excavated and exported for sale abroad. So, any object that was excavated and exported after 1970 should have a good deal of paperwork accompanying, it to ensure its legality. But the convention also granted an informal amnesty for objects excavated and exported prior to 1970. For this reason, you may encounter doctored paperwork suggesting that an object up for sale was exported prior to 1970, which can be used to excuse its lack of proper paperwork. This may be true, but it also is a trick that troublemakers use to make a newly-excavated antiquity appear legal.

In the world of fine art, the more provenance, the documented history of an object, that can be found, the better. But in the world of antiquities, sometimes there is little to no paper trail. That doesn't necessarily mean that the object was looted, but any antiquity that has been outside of its find country long enough ago should have some sort of trail of paperwork that suggests that it had a long enough biography to match its alleged excavation and exportation dates. So be very suspicious of antiquities that have no accompanying documentation, or very little, and especially be ready to walk away if any dealer refuses to talk about the origin of objects or to provide you with any paper work. That is an immediate red flag.

3. Then read the documentation carefully

Then comes the second step. There is such a focus on provenance that sometimes people look for quantity without looking at the content. Whenever presented with documentation reported to be associated with a certain object, you must be very careful to make sure that a) the provenance documents are not forgeries, and b) that even if the paperwork is authentic, that it does truly refer to the object in question. Appropriating one document and trying to pass it off as referring to an object that was recently looted is a not uncommon trick of the trade. So, don't look just for quantity of documentation but look very hard at the documentation itself.

4. Due diligence and the limits of "good faith"

In order not to get into trouble for having accidentally purchased a looted antiquity, a buyer must be able to prove two things in court. One is “due diligence,” which means that you can show that you made a reasonable effort to ensure that the object in question does not appear on any stolen art database or police record of stolen or looted objects. This is basically demonstrating that did your homework to make sure that there was no obvious notice that the object in question is problematic.

The second component is that you have to be a “good faith” purchaser. That means that you have to be able to demonstrate that you genuinely thought the object was legit when you purchased it. This second component is rather nebulous, and one could see how it would be fairly easy for an unscrupulous type to take advantage of these two proofs. Unless someone wrote a diary entry that reads, “Dear diary, I just bought an antiquity that I know was looted but bought it anyway,” then it is quite easy to prove good faith.

We mentioned that due diligence involves checking stolen art databases and police lists of stolen art. But what sometimes happens is that a buyer will check an antiquity against such a database, knowing it will not appear there, because such databases only contain objects that were reported as having been stolen from extant collections, therefore they could never list antiquities taken directly from clandestine archeological excavations. Aware of this, a buyer or dealer could prove due diligence by checking such a database, receiving a document attesting to the fact that it did not appear in the database, and therefore protect themselves with the excuse that they didn’t know that the object in question was looted. It is a bit too easy to pretend that you didn’t know, and even to have documents supporting this argument, when you probably did. The laws currently in place are beneficial to troublemakers.

The vast majority of the art trade is 100 percent well-meaning and acts legally. There is a very tiny handful of bad guys who work within it and take advantage of the odd and murky organism that is the art trade. But there is a good deal of what I tend to call “non-malevolent wishful thinking.” That is to say that almost no one is doing anything that they would identify as illegal, but there he is a large measure of subconscious wishing that any new antiquity that comes onto the market would be authentic and legitimate. If it is, many people benefit. The seller makes money, the middlemen make their commission, scholars have a new object to study, and the buyer has a new trophy. So, there's a marginal propensity to hope that every object is legit, and then to perhaps overlook questionable aspects of it because of that enthusiasm. This is really what buyers have to be wary of, from private individuals looking for souvenirs to giant, multi-million-dollar museums.