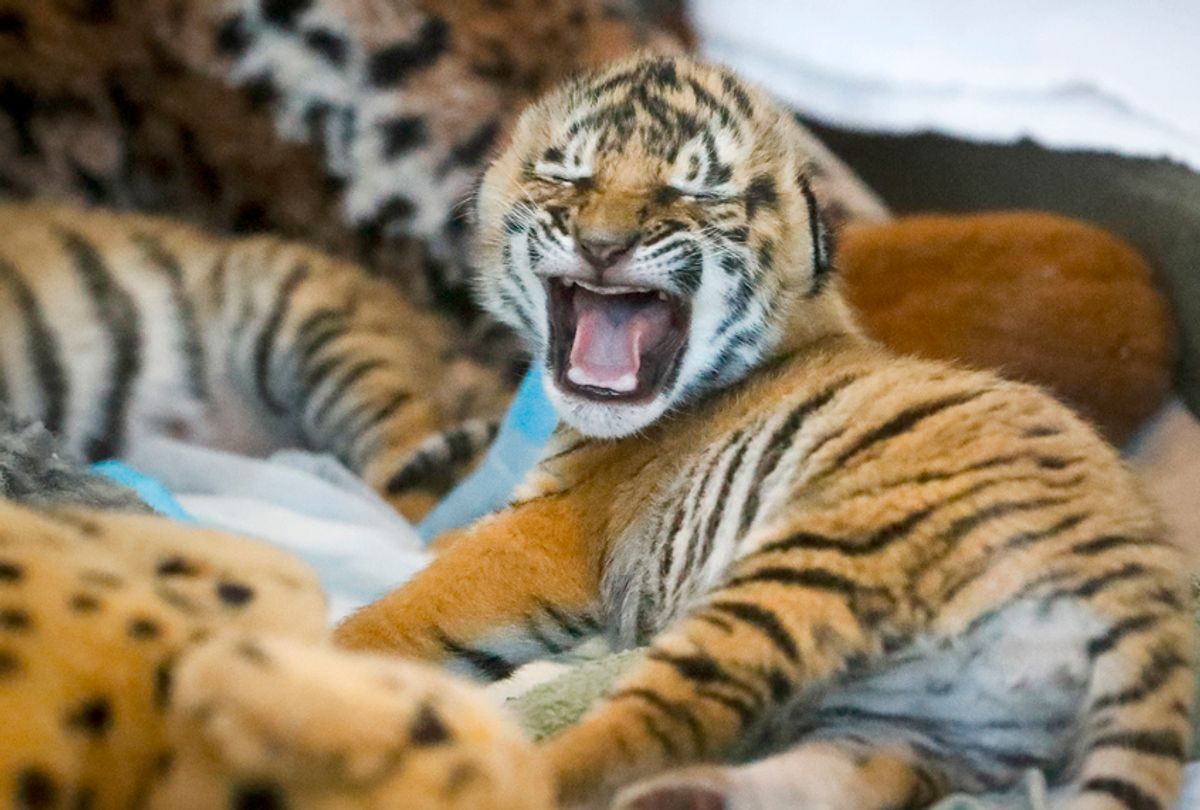 Newborn Malaysian tiger cubs rest in their nursery before they are fed at the Cincinnati Zoo & Botanical Gardens. (AP/John Minchillo)
--

Conservation groups are calling for an international environmental treaty, modeled on the Paris climate agreement, after a troubling report found that global wildlife populations have decreased by 60 percent over the last four decades.

The biggest threats to these species are directly linked to human activity, and are a result of habitat loss, degradation and overexploitation.

“That’s why we, along with conservation and science colleagues around the world, are calling for the most ambitious global agreement yet – a new global deal for nature and people,” the report stated. “Decision makers at every level need to make the right political, financial and consumer choices to achieve the vision that humanity and nature thrive in harmony on our only planet.”

Entitled "Living Planet Report 2018," the non-profit World Wildlife Fund published the report, which highlights distressing truths as to how human activity has adversely affected the planet’s wildlife, forests, oceans, rivers and climate. Specifically the report stated that more than 4,000 mammal, bird, fish, reptile and amphibian species have declined in numbers between 1970 and 2014.  Moreover, species extinction rates in animal ecosystems are nearly 1,000 times higher than in eras prior to human activity.

Marco Lambertini, the World Wildlife Fund's director general, told CNN the speed at which species are going extinct or becoming endangered is “unprecedented.”

"It's mindblowing. ... We're talking about 40 years,” he said. “It's not even a blink of an eye compared to the history of life on Earth."

The report states that by 2050, the proportion of wild land that is free from human impact is predicted to decrease from one-quarter to one-tenth. Coral, which protects humans on land from storm surges and waves, is predicted to be 90 percent gone by mid-century, too, if current trends continue. Additionally, an estimated 90 percent of seabirds have plastic in their stomachs now — a drastic increase compared to the estimated 5 percent in 1960.

“This report sounds a warning shot across our bow. Natural systems essential to our survival – forests, oceans, and rivers – remain in decline. Wildlife around the world continue to dwindle,” Carter Roberts, President and CEO of WWF-US, said in a statement. “It reminds us we need to change course. It’s time to balance our consumption with the needs of nature, and to protect the only planet that is our home.”

While the statistics are harrowing, some scientists remain optimistic that this grim future can change course if serious action is taken immediately.

“From rivers and rainforests, to mangroves and mountainsides, across the planet our work shows that wildlife abundance has declined dramatically since 1970,” Professor Ken Norris, Director of Science at the Zoological Society of London (ZSL), said in a statement. “The statistics are scary, but all hope is not lost. We have an opportunity to design a new path forward that allows us to co-exist sustainably with the wildlife we depend upon. Our report sets out an ambitious agenda for change.”

Previously, other scientists have not been so hopeful. In July 2017, a study published in the peer-reviewed journal Proceedings of the National Academy of Sciences, suggested a “biological annihilation” could signal a sixth mass extinction is underway.