Charleston to Tree of Life: White nationalism is a threat to us all

Spaces of worship are sadly most vulnerable to white nationalist violence 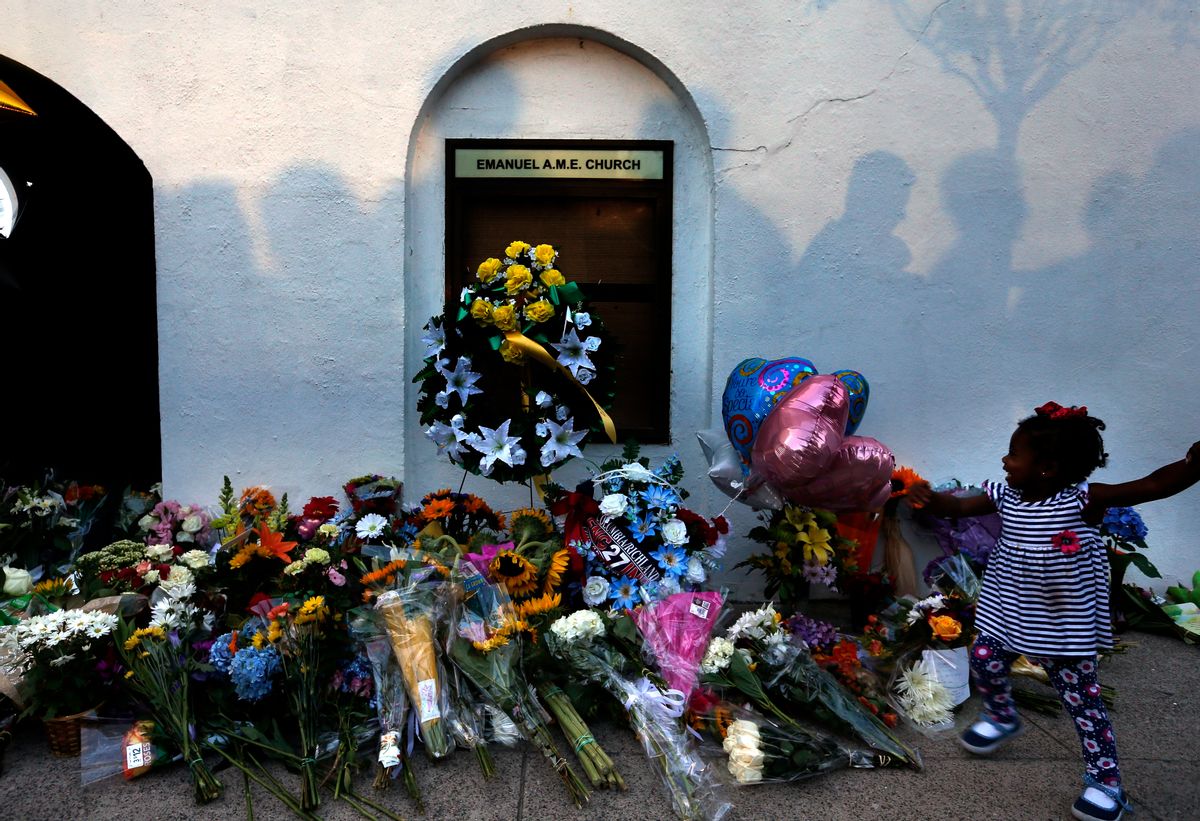 FILE-In this Thursday, June 18, 2015 file photo, mourners pass by a make-shift memorial on the sidewalk in front of the Emanuel AME Church following a shooting by Dylann Roof in Charleston, S.C. A federal jury will consider whether Roof should be sentenced to death or life in prison for killing nine black church members in a racially motivated attack. (AP Photo/Stephen B. Morton, File) (AP)
--

This weekend we witnessed a sacred place desecrated by violence as 11 people were shot dead at Tree of Life Congregation, the third-oldest synagogue in Pittsburgh, Pennsylvania. Many of us had flashbacks to June 17, 2015, when the nation watched in horror as nine black parishioners and clergy were brutally murdered during a weekly bible study at Mother Emanuel African Methodist Episcopal Church in Charleston, South Carolina. While separated by over 650 miles, the connection between these incidents is clear. Both were perpetrated by white men infected with the disease of a white supremacist ideology and emboldened by white nationalist propaganda.

There is nothing new about this violence. As a Jewish racial justice organizer living in the South and as a clergywoman in the African Methodist Episcopal Church married to a Jewish man, we both know all too well the intimate linkages between anti-black racism and anti-Semitism. Both share common patterns of otherization, systemic isolation, and never-ending threats of physical violence. The distinction is that unlike anti-black racism, which requires a fixed hierarchy or binary system of values — i.e., Whites are supreme, Blacks are on the bottom — anti-Semitism is often described as cyclical. The Jewish experience has been characterized by periods of stability and safety, only to be countered by periods of intense anti-Jewish violence and oppression. For Jews of Color, navigating these terrifying realities is a fact of their daily lives.

For decades, white nationalists have blamed Jews for black and brown communities causing unrest in white Christian societies. The most recent manifestations of this perverse legacy are conspiracy theories about billionaire philanthropist George Soros and the Hebrew Immigrant Aid Society thatassert that Jews are responsible for bringing immigrants into the country, endangering white Christian lives. There are real-life consequences to these concepts entering the public lexicon. According to the Anti-Defamation League, hate crimes against Jews in the United States increased by 60 percent in 2017. These trends are not unique to the United States. White nationalist myths about George Soros and Jewish responsibility for the global migrant crisis travel throughout Europe, where anti-Semitism is also on the rise in Europe.

It would be easy to attempt to isolate the tragedy at Tree of Life Congregation to the actions of one madman. Yet just this past week a white man in Jeffersontown, Kentucky, killed two black people at a Kroger grocery store after trying and failing to enter a predominantly black church nearby minutes before the fatal shooting. Sacred spaces of worship have historically been the places our communities are most resilient and also most visible and vulnerable. They have been sites of resistance for pushing back against injustice. It is no wonder then that our sanctuaries are targets for white nationalist violence.

Just as the actions of Mother Emanuel shooter Dylann Roof were fomented by public rhetoric fanning the flames of white racial resentment and anti-blackness, so too was the loss of 11 souls during Shabbat services this week the result of widespread anti-Semitic ideology stoked by politicians and leaders. To be sure, anti-Semitism and anti-black racism have been around for centuries. But the white nationalist movement has been emboldened by President Trump’s dog-whistles and outright blaming of Jewish philanthropists for social unrest, the Republican leadership’s echoing of those tropes and their blatant anti-Semitic messages, and by right-wing leaders in Eastern Europe. All this has escalated the violence to levels not seen since the first half of the 20th century — a time, it should be noted, characterized by the genocide of over 6 million Jews and an epidemic of racial terror lynchings across the American South.

Today white nationalism is fueling and escalating anti-Semitism and violent anti-blackness. The massacres at Mother Emanuel and Tree of Life are white nationalism taken to its desired ends: the elimination of otherness by any means necessary. The Trump campaign, Trump administration and Republican congressional leadership have been peddling white nationalism for years now.

They have peddled white nationalism explicitly through appeals to anti-Semitic rhetoric and implicitly through their silence and complicity. For this is what happens when this violent ideology courses through our country, unchecked. All our communities are put at risk, often with deadly consequences.

Reverend Jennifer Bailey is a clergywoman in the African Methodist Episcopal Church, the executive director of Faith Matters Network, and co-founder of the People’s Supper.

Dove Kent is a former executive director of Jews for Racial and Economic Justice in New York City.