Pushing his fake “invasion,” Donald Trump is trying to conjure an October Surprise 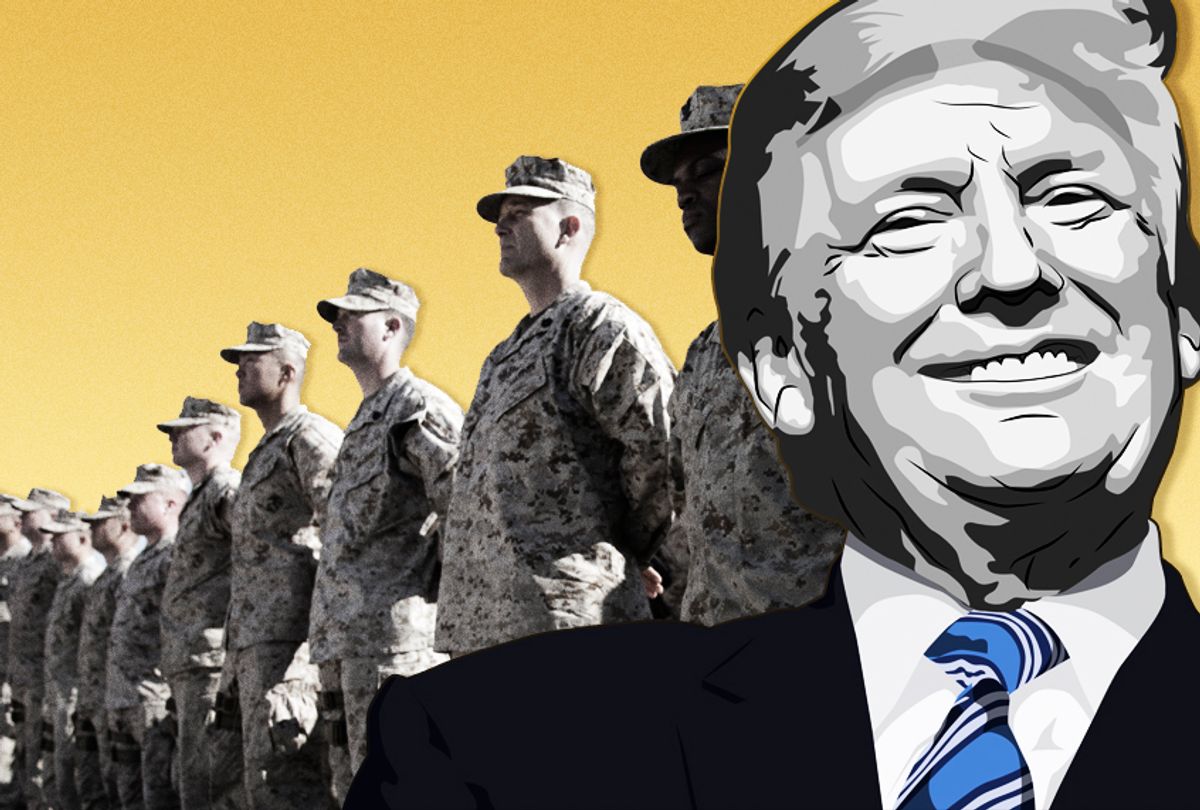 On September 11, 2001, in a coordinated attack organized and commanded from Afghanistan by al-Qaida leader Osama bin Laden, 19 terrorists hijacked four American airliners and killed nearly 3,000 American citizens, injured 6,000 more, and caused 10 billion dollars in property damage. It was the largest attack by an enemy ever carried out on American soil.

Two months later, President Bush committed 1,200 American troops to Afghanistan in response to the al-Qaida attacks. By December, that number had grown to 2,500, and the American forces had taken Kabul from the Taliban and drove bin Laden and his al-Qaida fighters from the country.

More than 3,000 of our citizens had been killed. We responded by sending 2,500 combat troops in “Operation Enduring Freedom.”

This week, the Department of Defense announced that it would commit more than twice that number, 5,200 armed combat soldiers, to our border with Mexico in “Operation Faithful Patriot” to defend us against the sinister “caravan” that is set to “invade” our country, according to President Trump. There are already 2,092 National Guard troops on the southern border, ordered there by Trump in April of this year. That means a total of 7,792 combat soldiers will be deployed on American soil, allegedly to defend the United States from the so-called “caravan” of penniless refugees currently making its way through Mexico at less than three miles-per-hour. In reality, Trump is staging a stunt during the midterm election season to crank up fear and turn out his base.

The caravan has about 1,000 miles to go, if they are heading for the nearest border crossing in McAllen, Texas. It’s not known when they will reach the United States, but most estimates say they are at least several weeks away. If this group of refugees turns out to be anything like previous groups that have moved through Mexico looking for asylum in the United States, it will be greatly diminished in number before it reaches the border.

According to reports from the caravan, most of its refugees plan to apply for asylum at border crossings like the one at McAllen, Texas. But if some attempt to cross the border illegally, we are ready for them. According to USA Today, there are already 18,600 Border Patrol agents deployed along our border with Mexico, three times as many as there were twenty years ago.

All of the Border Patrol agents are well-armed. They are issued the Heckler & Koch P2000 .40 caliber semi-automatic handgun, carrying up to 13 rounds of ammunition. Some of them carry the 12-gauge Remington Model 870 pump action shotgun, modified by Scattergun Technologies to have a 14-inch barrel, a five round magazine, and a composite stock and pistol grip. They can also carry the .223 caliber Colt M4 Carbine or the Heckler & Koch UMP .40 caliber submachine gun. They are issued OC Pepper spray canisters, tasers, and a collapsible telescopic steel police baton.

The American army soldiers being deployed to the southern border are also heavily armed. They commonly carry the .223 caliber Colt M4 Carbine, or the 9mm Beretta handgun, or both. They can also be issued the M4 carbine outfitted with the M203 over-and-under attachable 40mm grenade launcher. The 40mm grenade launcher can fire the M-series high explosive cartridges and the M576 cartridge, containing 20 20-grain shotgun style pellets, as well as the M651 CS tear gas round for riot control.

So let’s see what we’ve got here: 18,600 Border Patrol agents, plus 5,200 Army combat troops on the way, plus 2,092 National Guard soldiers already deployed along the border with Mexico. That’s a grand total of 25,892 heavily armed agents and soldiers, carrying semi-automatic pistols, shotguns, and carbines capable of semi-automatic or automatic fire.

The Department of Defense announced on Monday that the Army is sending three combat engineer battalions, equipped with heavy machinery capable of building walls and barriers. They will also be carrying at least 150 miles of concertina razor wire. Three companies of medium-width helicopters will also be sent to the border, capable of transporting both troops and Border Patrol agents where they are needed along the border. Several Military Police units will also be part of the combat package headed for the border.

According to the New York Times, the deployment is scheduled to last until December 15 and will cost in the tens of millions of dollars. Deploying 7,800 troops along hundreds of miles of the border with Mexico isn’t like going on a class trip. You don’t load them onto busses with food vouchers and motel reservations. Convoys of trucks carrying gasoline and diesel fuel will accompany them. Hundreds of tents will have to be erected to house them. The Army will have to hire contractors to erect temporary dining facilities and move hundreds of tons of food down there to feed them. They will have to take along their own medical teams, and establish field hospitals so they can treat any soldier who get injured. In short, it will be a massive, and massively expensive, undertaking.

And who are they being sent to defend us from? Who is it that’s supposed to “invade” the United States, according to our president?

According to USA Today, the Mexican government estimates that there are about 4,000 unarmed civilians, mostly women and children, currently walking toward the United States. The “caravan” started with about 120 migrants on October 12 in San Pedro Sula, Honduras, near the border with Guatemala. Most of the migrants are fleeing crime and corruption in their home country of Honduras. According to the Mexican government, about 1,700 of them have applied for asylum in Mexico, and about 200 of them have returned home. The migrants tell aid workers they intend to apply for asylum when they reach the United States.

You will note that nothing — absolutely nothing — is known about the so-called “caravan” from American government sources. Everything that has been reported about the migrants has come from the Mexican government through U.S. media, or by U.S. media reporting on the ground. The administration of Donald Trump did not respond to the “threat” of the caravan by diplomatic means. That’s because we don’t have diplomatic means with which to respond, since Trump has not appointed an American ambassador to Mexico. The Trump administration has not to my knowledge told the Department of State to intervene through USAID or other aid measures. The administration has not sought help from the United Nations High Commissioner for Refugees, the U.N. agency for refugees, which is in the business of protecting refugees and displaced people and helps to resettle them in countries other than their own where they will be safe. The administration has not sought aid from the World Bank or the International Monetary Fund, either of which might provide financial aid to the refugees fleeing Honduras.

We have CIA satellites capable of counting the hairs in a donkey’s mane, but apparently the Trump administration has not seen fit to ask any of its intelligence services about the nature of the “threat” we face from the caravan. This has enabled Trump and the right-wing media to throw around numbers from as many as 10,000 to 7,000, to 5,000 over the past couple of weeks in a naked attempt to gin up panic about these “invaders.”

This is what we’ve got: a completely ginned-up “crisis” based on zero military or political intelligence. What is Defense Secretary Mattis doing? Why, he’s saluting sharply and barking “YES SIR” to the orders of Comandante Bone Spurs. Remember Mattis? He was supposed to be one of the “adults in the room” who would protect us from the insane whims of this ignorant, uninformed so-called commander in chief. And yet, here we are, spending what will turn out to be tens of millions of dollars to send heavily armed soldiers to the southern border to “defend” us from a couple of thousand unarmed, poverty-stricken, frightened migrants fleeing for their lives, doing nothing more than looking to the United States of America for help.

God help them, and god help us. We’re going to need it.