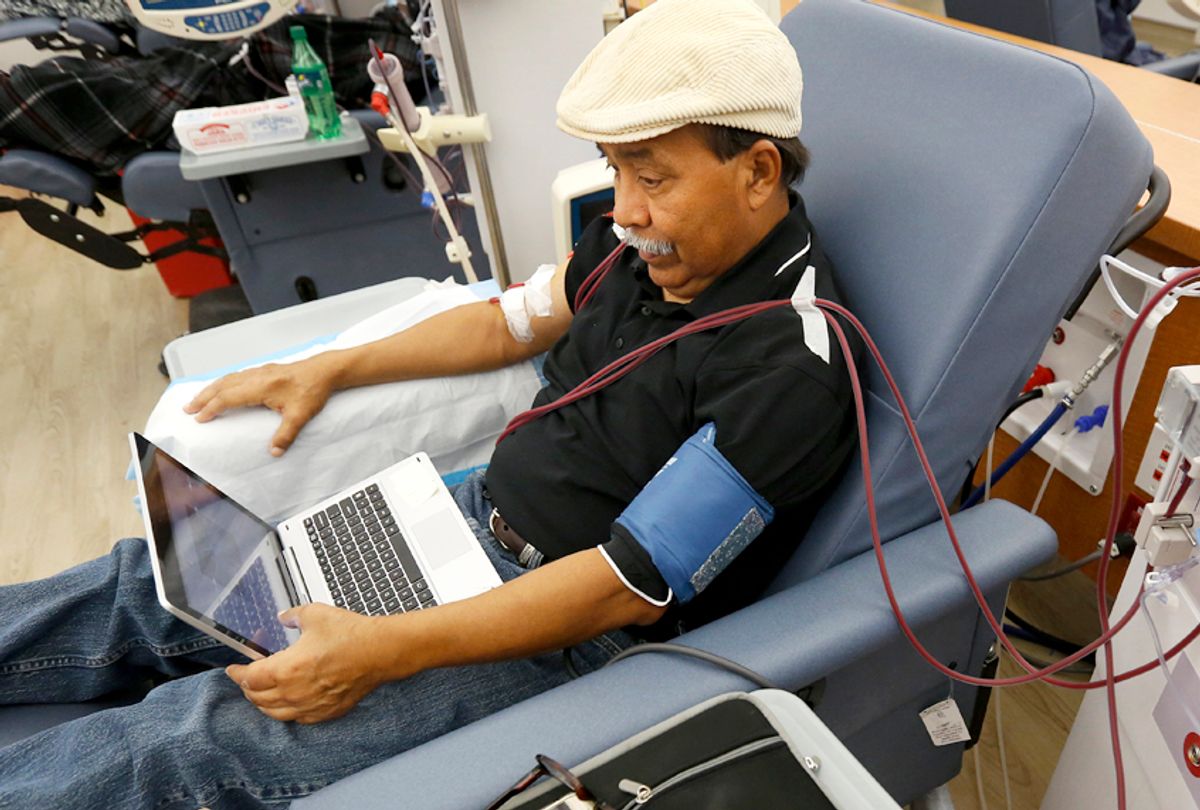 It feels like a scene from a science fiction dystopia: massive corporations pocketing huge profits via a service that literally sucks clients' blood, and which patients will literally die without. That's the essence of the dialysis industry, which, dominated by several corporate behemoths, is under scrutiny for unsanitary facilities, health code violations, price-gouging accusations and lawsuits from patients' families who died under their supervision.

In California, a group of activists, led by labor groups, are championing a state ballot initiative to regulate this Dickensian industry. Dubbed Proposition 8, dialysis companies are willing to do anything to kill it, fearful that it would cap their profits. Together, these corporations are spending a record-breaking $111 million on a campaign to oppose it. That’s because the livelihood of these clinics are largely at stake, according to those opposing the ballot measure.

“Prop 8 sets lower limits on what insurance companies will be required to pay to dialysis clinics for treatment,” Kathy Fairbanks, a spokeswoman for the opposition campaign, told Salon. “These lower payments won’t be enough for dialysis facilities to cover their costs.”

That seems like a stretch, particularly given that two dialysis care companies have spent a record-breaking sum — over $100 million — to oppose this minor regulation. The two for-profit companies are Fresenius and DaVita, which dominate the dialysis care circuit in California and nationwide; together they serve nearly three-fourths of Californians who require dialysis.

The funds raised to support the No on 8 campaign are the most a campaign has spent on one side on a U.S. ballot measure since 2002, according to an Associated Press analysis. Dialysis provider Fresenius Medical Care pushed the total amount of funds for the opposing campaign past the previous record — $109 million, which pharmaceutical companies spent to oppose a measure limiting prescription drug costs — with a $5 million donation last week.

According to the nonpartisan California legislative analyst's office, dialysis companies bring in nearly $3 billion in annual profits from their California operations — yet, according to one dialysis patient Salon spoke to, Lorraine Lewis of Los Angeles, they claimed they couldn’t afford to give her a package of chicken broth after a treatment. She described her experiences at two DaVita centers in Los Angeles as “cold” and like an “assembly line.”

“It was obvious to me they were understaffed and overworked,” the 71-year-old told Salon. “I witnessed a death and that [made me feel] crazy, because I said, ‘the same thing can happen to me.’”

The man whom Lewis saw die during treatment was left unattended, according to her account, seemingly because of staffing issues.

“Two minutes later she [the technician] comes around and she looked at him and she started working on him and she went to call for the nurse and they put the put him on the floor, and gave him CPR but it didn’t work,” she recalled.

The massive sum spent to defeat the measure, and harrowing stories like Lewis's, belie the companies' claims that the measure will have an adverse impact on the dismal conditions in many dialysis clinics. Indeed, given that the proposition requires corporations to return excessive profits that aren't spent on improving patient care, and limit what insurance companies are required to pay for dialysis care, it seems like a minor regulation that would help prevent the kinds of dystopian scenes patients have experienced in said clinics.

Dialysis is a life-saving treatment. It helps patients with kidney failure by removing their blood from their bodies with a machine, cleaning out the toxins and waste, and putting it back in the body, a function patients' kidneys can no longer successfully do. A typical four-hour session can be grueling for patients, however. Moreover, there have been reports of unsterile environments in the California centers — blood stains on the floor among them — and terrible patient care. Yet each patient who has a private insurance provider is charged nearly $150,000 a year — a 350 percent markup of the cost of care, according to those supporting the measure.

Just this last summer, two California families were awarded $253 million in damages in a lawsuit against DaVita for wrongful deaths — verdicts the company said they would appeal.

Opponents claim Proposition 8 will keep clinics from covering all of their costs.

“When you add everything up it will only cover 69 percent of a clinic’s total operating costs,” Fairbanks, from the campaign advocating against the proposition, told Salon. “Prop 8 bans managerial costs and doesn’t allow things that you absolutely must have in order to have business in California, such as insurance, as a healthcare facility you must have medical malpractice insurance.”

Yet patients' experiences reveal that many clinics are already spending barely more than the minimum on their patients and facilities — and indeed, Proposition 8 would raise that minimum. Lewis, who has been a dialysis patient for six years, said one time after leaving her treatment at a Los Angeles DaVita treatment center she felt “weak.” Another patient was nearby when this happened and called the center for help, to which she was told there was nothing they could do because Lewis “had left the premises.” He wheeled her back.

Sean Wherley, a spokesperson for the Service Employees International Union–United Healthcare Workers, the organization that sponsored the measure, explained to Salon how Proposition 8 ended up on this year’s ballot.

“Two years ago dialysis workers approached the union with concerns about poor patient care,” he said. “They attempted to organize, but they never held a vote because they came under tremendous pressure from these companies,” he said. “Some received threats to be fired, and efforts just flatlined.”

Wherley said industry threats that the centers will close if the proposition passes are merely a “scare tactic.”

“They have the means to keep these clinics open, it just won’t be at the outrageous profit margins they are making today,” he said. “They have chosen not to invest in their patients.”

Fairbanks claimed patient care in California is “very good,” noting there is “always room for improvement.” “They have patients who have seen bugs, and I’m sure they have, but that doesn’t mean all throughout the state of California the situation here is that patient care is suffering,” she said.

Yet Wherley pointed to a report  by the California Department of Public Health that found more than 1,400 deficiencies during inspections at dialysis clinics in fiscal year 2016-2017.

“The industry is claiming the clinics in California are the best in the country, [but] the California Department of Public Health found more than 1,400 deficiencies in these clinics after only assessing a quarter of them,” he noted.