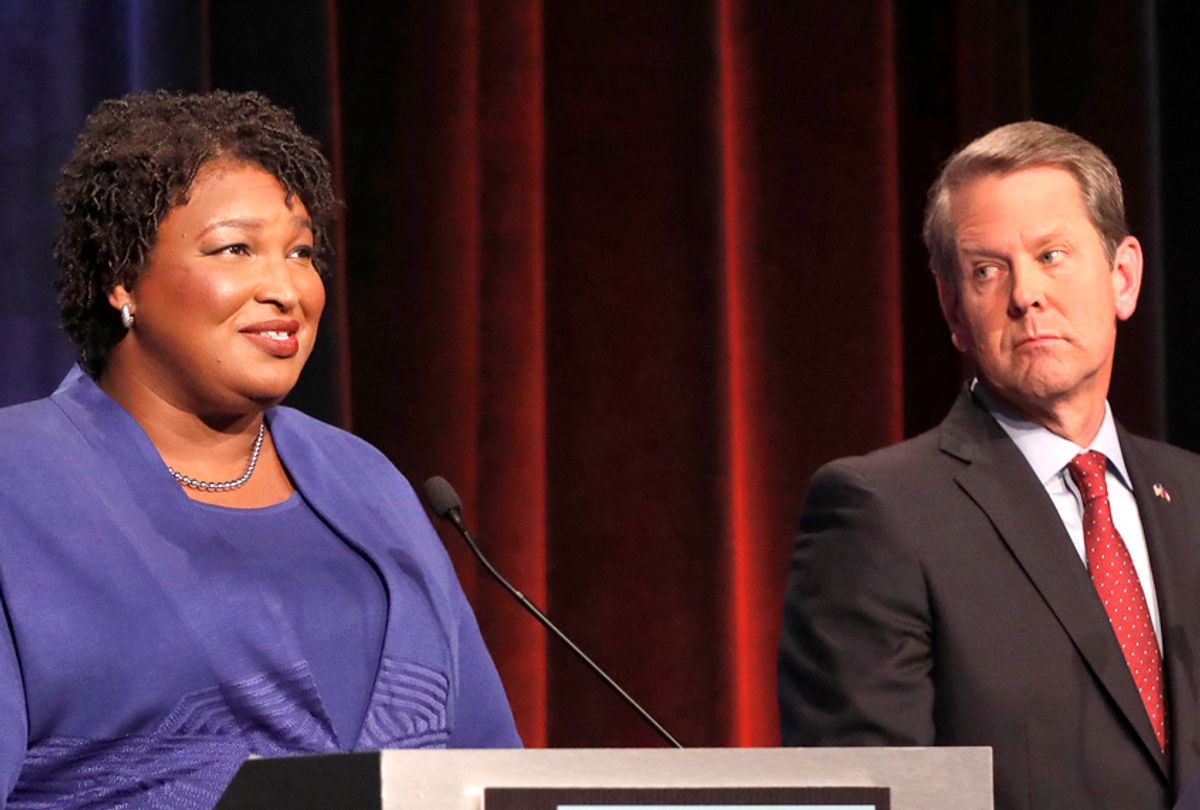 The Georgia governor race has been front and center in the lead up to the midterms —and it may not end on Friday.

If victorious, Democratic candidate Stacey Abrams would become the first black woman governor in the country. Yet her challenger, Republican Brian Kemp — who serves not only as her opponent but also oversees the administration of his own election as the secretary of state — has come under serious allegations of voter suppression. Georgia requires a candidate to receive at least 50 percent of the vote plus one to avoid a runoff, and the polls have shown Abrams and Kemp neck-and-neck for weeks.

A poll released Friday by Cygnal shows Kemp with a 49 percent to 47 percent edge over Abrams, but another poll released on Friday is the first to show either candidate with 50 percent support.

The Georgia-based Southern Majority poll, conducted by polling firm 20/20 Insight, found Abrams with 50 percent and Kemp receiving 46 percent of votes. The poll is based on 614 respondents and has a 4 percent margin of error.

Another shock revelation in the gubernatorial race is a new claim that the police in Georgia have targeted black voters and community leaders in the lead up to the election.

Royce Reeves, Sr., a barber and elected city commissioner in Cordele, Georgia, received a ticket for illegally parking a limousine as he drove poor residents to the polls for early voting. He told the New Yorker that he borrowed a vehicle from a funeral home to take poor residents to the polls for early voting. After he yelled out of the limousine window to alert the community of his mission recently, Reeves told The New Yorker,  a law enforcement officer who was ticketing someone else began following him and pulled him over a few blocks later. The police car signaled its lights to stop Reeves and he got out the car, but then seven more law-enforcement vehicles showed up to the traffic stop.

"They called in a bunch more troopers." Reeves said to the New Yorker, "They knew that that limousine was being used to haul people to the polls. They knew that. How many other people riding around town in a limousine?"

"That’s a crying shame," Takeyla Singleton, the videographer is heard saying in the video. "On one little person. And the man driving the funeral home car!"

The Georgia State Patrol told the New Yorker that the trooper, who first stopped Reeves, called for back up, due to the fact that "the driver was out of the vehicle with a small crowd."

Reeves' experience with the police recalls another voting effort disrupted in October when a group of about 40 black seniors boarded a bus organized by the nonpartisan group Black Voters Matter to take them to the polls for early voting. Shortly after boarding, county officials stopped the trip. The Jefferson County Administrator Adam Brett later clarified that he felt "uncomfortable" allowing the seniors to leave the facility with "an unknown third party," he told the Atlanta Journal-Constitution.

The NAACP Legal Defense and Education Fund sent a letter to the county requesting an investigation and describing the incident as "an unacceptable act of voter intimidation," Think Progress reported.

These individual events also add to what many perceive as systematic voting suppression from Kemp. Between 2012 and 2016, his office has canceled more than 1.4 million voter registrations, and over half a million more in 2017, alone. In Oct., 53,000 people's registrations were put on hold due to an "exact match" voter I.D. law, 70 percent of whom were black.

There's more. "In August, an elections consultant linked to Kemp recommended the closure of seven of nine polling locations—many of them used by African-American voters—in a poor southwestern Georgia county. (The plan was voted down)," the New Yorker reported. "In another poor Georgia county, during Kemp’s tenure as secretary of state, an African-American grandmother, attempting to help a new voter use an electronic voting machine, was charged with the unusual crime of 'improper assistance in casting a ballot.' Six years later, after two trials, the elderly poll worker was finally acquitted."