Growing up in Westboro Baptist Church: We were "true believers," everyone else the enemy

My grandfather was Fred Phelps, who founded the notorious Westboro Baptist Church. This is what he taught us 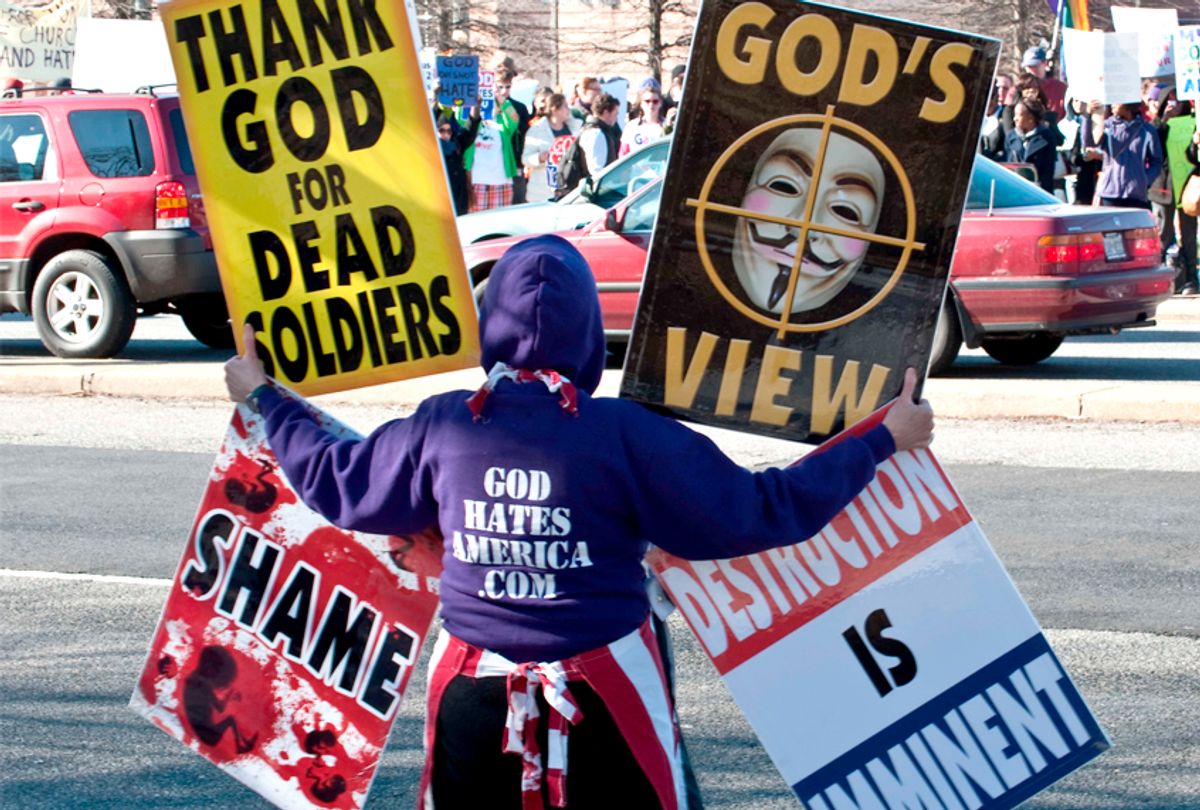 Members of the Westboro Baptist Church stage a protest across the street from Northwestern High School in Hyattsville, Maryland. (Getty/Nicholas Kamm)
--

"Girl on a Wire: Walking the Line Between Faith and Freedom in the Westboro Baptist Church" by Libby Phelps and Sara Stewart. Copyright 2018 by Skyhorse Publishing, Inc.

It was a hot, sunny summer morning in Topeka, and I’d settled myself beside the swimming pool to write. Stretched out on a lounge chair, clad in a T-shirt and running shorts, I scribbled intently in my pink journal with my favorite turquoise ballpoint pen. My grandfather walked laps around the running track that encircled the pool, wearing a nylon sweat-suit despite the heat. He wasn’t allowed to actually run anymore because it was bad for his elderly hips and knees, but he still got out there every day, striding around. A man on a mission.

Taking a break to sip from his water bottle, Gramps strolled across the lawn to my chair and peered over my shoulder.

“What you working on, Lib?” he asked with a grin. I angled the book up so he could see my list of the torments of hell, outlined in my looping handwriting.

Miraculously, I had been born a member of the only church on Earth whose congregation was going to heaven, and I had been taught from birth what happened to everyone who wasn’t. Or, for that matter, to anyone in our family who strayed from the path of righteousness.

A type-A student both in school and in church, I wanted to make sure I knew all of God’s punishments by heart. You should know them too, because that’s where my church says you’re headed.

You’re doomed to eternal torment in the fires of hell, as I wrote in that notebook, where the worm that eats on you never dies, where flames will ceaselessly shoot out of your eyeballs. Where you will look at others around you, amazed and disbelieving that you are all actually there, writhing in this agonizing and never-ending suffering. Where your pain threshold incrementally increases as your pain tolerance increases. Where there is a great gulf between you and the people in heaven, who can see you being tortured and taunt you for not heeding their warnings about God’s wrath while you were alive.

Gramps’s blue eyes skimmed my itemized list of everlasting damnation, each item bullet-pointed with a different metallic color, and his face lit up into a bigger smile. Bending his tall frame down, he kissed me gently on the forehead.

“I love you,” he told me. “I love you, I love you.” He walked away and resumed his exercise. Staring down at the list, my eyes filled with tears in spite of myself. Gramps loved me best when I was terrified for my immortal soul—which was most of the time.

My late grandfather, Fred Phelps, was the founder of the Westboro Baptist Church. The church is made up of about seventy people, and 90 percent of them are members of my immediate or extended family. (A few other families would join over the years, but I was always skeptical of them.)

The Phelps clan is the backbone of the WBC. For a man who lived nearly his entire life in a small Kansan town, Gramps’s name and face are well known all around the world. When people speak of him, the word “hate” comes up a lot. As in, “hate group.” Or “the most hated man in America.” Or “the man who loves to hate,” as one news story put it. The media covered my grandfather endlessly, which he loved. Did it bother him that they almost uniformly wrote about how terrible he was? Quite the opposite. He saw himself as a prophet, and as he often told us, throughout history people have always scorned prophets—right up until their prophecies come true.

As a member of his flock and family, I was more than just sheltered — I was actively warned against the corruption of the outside world. Again and again, in sermons and private conversations, I was told that civilization outside of WBC was made up of sinners, alcoholics, drug addicts, and lost souls with no moral compass. There was no gray area: You were either one of us, or you were depraved and doomed. So I was terrified of what lurked beyond the protective walls my family had carefully erected around me—terrified especially of gay people, because according to the WBC, homosexuals were the absolute worst of the worst, the most dangerous group of people in the world. As long as I can remember, I was told daily that they were the bottom rung on the ladder of depravity, sending all of America to hell in a “f*****t’s handbasket.” Gays were to blame for all the country’s natural disasters, terrorist attacks, and school shootings. My only view of life outside WBC was that it was an orgy of sin, that absolutely everyone was bound for eternal damnation. This was what I was taught, and believed, for the first 25 years of my life. I thought I was one of the few people God had selected to be His own. I felt privileged that by the grace of God I was born into this family, and I believed I was handpicked to represent God on the mean streets of America. Like all the other members of my family (excepting those who had made the foolish decision to leave the church), I was thankful to have been chosen out of this corrupt and sinful generation, while all others were blinded by the truth.

WBC is best known for our picketing, which began in earnest in the early 1990s. We picketed pop concerts, football games, churches of every denomination, and—most notoriously—the funerals of American soldiers and victims of hate crimes. You know who we are. You’ve gasped at television footage of me and my family at memorial services for American soldiers, waving signs that say THANK GOD FOR DEAD SOLDIERS. You have seen the images, each colorful neon sign emblazoned with a hateful, shocking slogan: GOD: USA’s TERRORIST. GOD HATES JEWS. THANK GOD FOR 9/11. The international media have covered our protests with unflagging interest, to the deep satisfaction of the WBC leaders.

For over 20 years, the church has picketed every day, 365 days a year. No exceptions. There is at least one daily picket in Topeka, our hometown, and sometimes there is also an organized picket in another city. GOD HATES F**S, our most well-known sign, was the enduring mantra of the church.

Gramps’s focus on gays came from the Biblical verse Leviticus 18:22: “Thou shalt not lie with mankind, as with womankind: it is abomination.” Twelve simple words, Gramps would always say. However, the homosexual population only really became the church’s crusade after Gramps’s complaints— about a park in our town being used as a hookup spot for gay men—were ignored. Rather than heeding his warnings about it, prominent people in town and fellow churches deemed his quest to have the park “cleaned up” extremist and homophobic. Their disdain inspired my grandfather to begin what he saw as his holy mission of calling out the unrepentant depravity of Topeka’s residents—and eventually the entire world.

When the picketing first began, WBC specifically targeted the gay population at pride parades and LGBT-friendly organizations or places that employed people known to be openly gay. Then we branched out to fallen soldiers’ funerals—a 180-degree reversal of Gramps’s previous attitude toward the military, up until the late ’90s, when he would pray for US soldiers in sermons, referring to them as “our boys.” Once Gramps decided the United States as a whole was on a fast track straight to hell, he proclaimed that no one should be fighting for a nation that supports and enables homosexuality. “A nation is doomed when it proudly embraces, exalts, and institutionalizes fag filth,” Gramps told us again and again in sermons and during pickets. Americans were “worshipping dead soldiers,” he told us. Instead of paying tribute to the dead body, he would explain to us, people should be warning their fellow man of the dangers of going to hell like the fallen soldier. God killed that soldier, he said, for fighting for a “filthy f*g nation, a sinful nation given over to perversion, a rebellious nation who will not hear the Word of the Lord, a nation covered with wounds and bruises and putrefying sores from the sole of her foot to the top of her woolly head.” (Why the nation had a woolly head, I was never quite sure.)

More specifically, Gramps preached to us that God was killing soldiers because Americans bombed us on August 20, 1995, when a small improvised explosive device went off outside my Aunt Shirley’s house, destroying property (but thankfully not injuring any of us). The church sent out a flyer offering a reward of several thousand dollars, and we eventually found out a local Washburn University student did it. He was found guilty and sentenced to only a couple of weeks in jail, which didn’t surprise my family members—they already thought everyone was out to get them, and that the government was in on it too. In retaliatory wrath, Gramps preached, God was killing Americans. “For it is written, Vengeance is mine; I will repay, saith the Lord,” he quoted from Romans 12:19.

People often ask me about the motives behind WBC’s public face. Do they really believe all of this shock-tactic stuff? Is it a publicity stunt? Are they doing it simply to be cruel? The bottom line is that WBC members absolutely believe in what they’re saying. They are convinced they’re doing the right thing—that this is the best way to love their neighbor. Sparing someone’s feelings doesn’t enter into the equation. We were taught that a true believer shows love by obeying God and urges their neighbor to do the same, and that to love thy neighbor is to rebuke him or her. WBC sees pickets as a battlefield: God’s people vs. “workers of iniquity,” or those who persecute the elect (that is to say, us). The elect were chosen “before the foundation of the world,” as the Bible says in Ephesians 1:4, so Westboro members were predestined as righteous prophets. The words on our signs—and coming from the picketers’ mouths—are really intended more for overall shock value than to make anyone feel bad, although we were often confronted with people brought to tears by our placards. Their visible pain was entirely beside the point, in the church’s view. Short sound bites grab people’s attention and spark interest, as we were taught early and often in church and in picketing meetings. As a result, passersby will look at the signs and have to make a choice: to serve God by picketing with us, or to turn their backs (which would be like turning their backs on God) and continue to be part of unholy America.

Libby Phelps was part of the Westboro Baptist Church until she was 25 years old. She’s participated in a BBC documentary titled "America’s Most Hated Family in Crisis," has been on "The Today Show" and "Anderson Cooper Live," and featured in media such as the New York Post, Lost Angeles Times, and xojane.com. Today, she’s a physical therapist and lives with her husband and son in Lawrence, Kansas.

Sara Stewart has been a features writer for the New York Post for over a decade and wrote an extensive profile of Libby Phelps for the Post in April 2013. She has also written features for The Contently Foundation for Investigative Journalism, Cosmopolitan, Glamour, the feminist site Women & Hollywood, and more. She splits her time between Brooklyn, NY and Indiana, PA.