"Mid90s" exposes the violence of boyhood: Teen trauma is a masculine rite of passage, too

Jonah Hill shows how the mandates of coolness hurt naïve young boys. We're used to seeing that as a girl's story 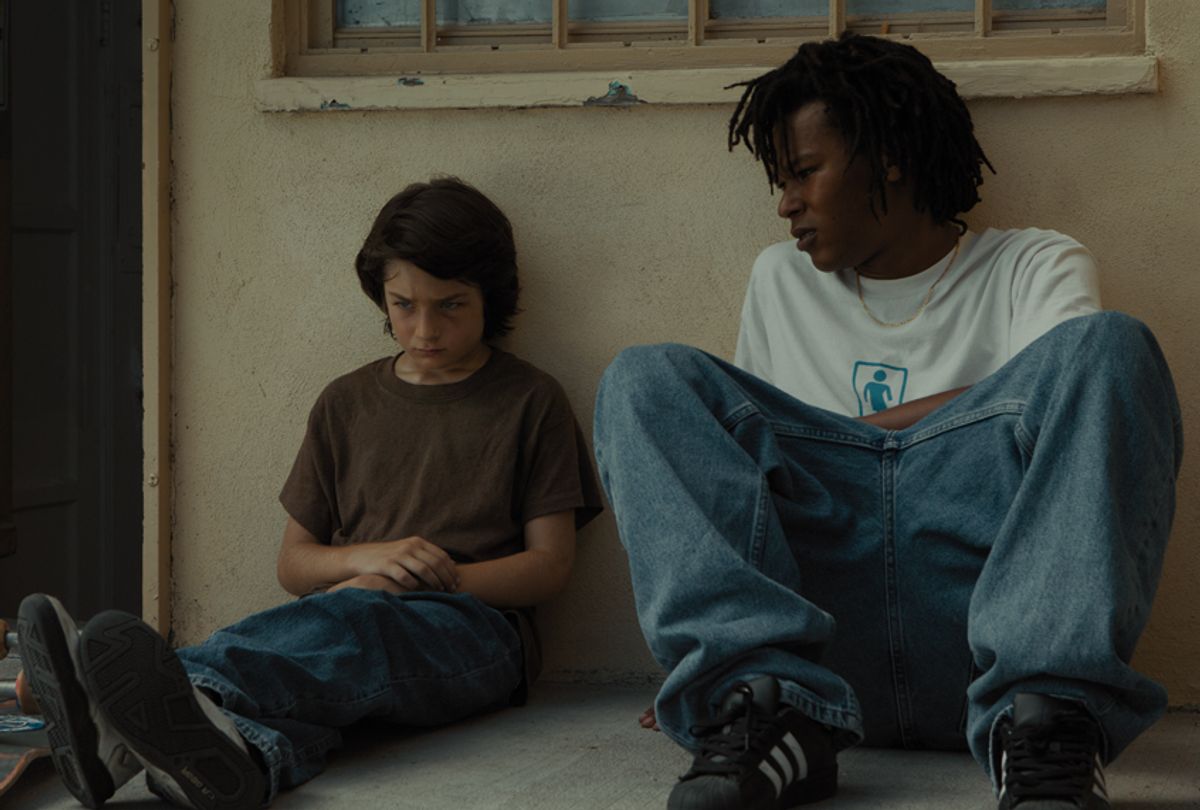 In the first shot of “Mid90s,” a young boy flies across a hallway and slams into the wall. The force is so great it’s as though the child were dropped from the sky, the frame rotated 90 degrees, gravity the culprit and not an offscreen brother.

If spatially disorienting, this collision befits the start of a film punctuated by sudden violence against the body — a boy’s body, in this case, at the cusp of adolescence. It also quickly smashes any expectation that Jonah Hill’s debut as a director will prove light-hearted stoner fare, or rehash the lewd bromance that launched a thousand “Superbads.” While fans of bro-on-bro braggadocio will not go hungry — “Mid90s” can make Judd Apatow sound like Emily Post — this coming-of-age story is ultimately no laughing matter, and about as far off from a “male answer to Ladybird” as one could conceive.

Thirteen going on eleven size-wise (lead Sunny Suljic’s age when the film was shot), protagonist Stevie is painfully, often pathetically, desperate to be cool. No longer satisfied with Ninja Turtle bedsheets, Beavis and Butthead tees, and Blockbuster Video Saturdays with mom, he studies the room of his brother Ian (a beefed up Lucas Hedges) as though preparing for a midterm. Whether examining The Source, scuffless Jordans, or a barbell he can barely lift, Stevie longs to be like the person who beats him up almost daily. The irony is funny until of course it is not.

“Would you rather suck your Dad’s dick or eat out your Mom?” says a scrawny, pimpled teen to his friends in the local skate shop. And that’s where it all begins — escape into delectably aimless raunch, Stevie’s first real taste of brotherhood. For “Sunburn,” as he’s quickly dubbed by this older So-Cal crew (played by mostly first-time actors), belonging means learning to sh*t-talk and smoke, smirk and skedaddle in equal measure. Hill’s LA is a city of lonely palm trees, vacant lots, and signs warning “Parking for Tennants Only” [sic]. Paradise, in other words, for a kid with a board and a pack of friends.

But unlike Saoirse Ronan pitching herself from the passenger seat to piss off her mom, Stevie doesn’t escape his misadventures with just a broken arm. “You’re crazy as f**k, yo! Sunburn is f**king insane, yo!” is the response to the sacrifice of his body for some greater good. No stunt is too scary, no bong too strong. The violence wrought by his brother Ian (a stormy 180 from his own “Ladybird” role) ricochets in the harm that Stevie inflicts on himself — either directly, in compulsively beating or scratching his body in moments of panic or guilt, or indirectly, in the risks he takes to prove himself to his new friends. Suljic’s slightness and shortness of stature, even on wheels, maximizes the spectacle of such physical peril.

“‘Mid90s,’ when you get right down to it, is about our ability to take abuse,” writes Bilge Ebiri in Vulture, “physically, mentally, emotionally.” I’d amend that to say it is a film about a boy’s ability to take abuse, as his only available recourse to some semblance of masculine strength. “You literally take the hardest hits out of anybody I’ve seen in my entire life,” says Stevie’s skater mentor Ray (Na-Kel Smith) after a particularly devastating injury. “You know you don’t have to do that, right?”

But what if, in fact, Stevie does? For a boy whose singular goal is to be “cool” among other boys, manliness is a matter of enduring grave pain to shrug (or skate) it off a second later. Ebiri points out the Scorsesian strain of “bodily mortification” in the film, referencing “Raging Bull” and “Wolf of Wall Street” as influences (Hill nabbed his second Oscar nod for the latter). From a different, if related angle, “Mid90s” feels in keeping with another Angeleno coming-of-age drama, this one following an innocent young woman destroying herself to be cool: Catherine Hardwicke’s “Thirteen” from 2003. In this harrowing account of a single mom and her impressionable daughter, Tracy (Evan Rachel Wood) befriends rebellious Evie (Nikki Reed) and rapidly transforms from pig-tailed honor student into a drinking, smoking, thong-flaunting harlot.

But in “Mid90s” the mandates of coolness are shown to genuinely hurt naïve young boys — rare considering the decades in which teen trauma has been almost always been taken more seriously when it comes to girls. And while “Thirteen” often resorts to after-school-special sensationalism — in its tear-stricken climax, mom Melanie (Holly Hunter) forces Tracy to reveal where she cuts herself — “Mid90s” doesn’t indulge in maternal heroism or pat resolution. It also, thankfully, isn’t a morality tale. Stevie’s foul-mouthed friends are never villainized as dangerous people of color, or scapegoated in the way that Evie is in "Thirteen." Rather, each one of his pals’ rebellion is a foil to some level of true despair; Ray has lost a little brother, “F**ksh*t” (Olan Prenatt) struggles with school, and “Fourth Grade” (Ryder McLaughlin) is “so poor he can’t even buy socks.” Ruben, a mid-pubescent Latinx kid, and the second youngest member of the group, never goes home to avoid his violent alcoholic mother. And yet “I smoke, I skate, I f**k bitches,” he brags to Stevie early on in the film. “I have a cool-ass life.”

Hill is perhaps strongest in playing up the distance between the boys’ cocky posturing and the real fragility concealed therein. For Stevie, this irony arguably culminates in a form of quasi-sexual predation — only he seems the victim given his age and lack of experience. At the house party where he meets Estee (played by Alexa Demie with a pristine middle part), she finds this innocence endearing. “You’re so cute,” she says. “You’re, like, at the age before guys become dicks.” After assuring him that he’s “not like the others,” but “sweet,” she leads Stevie to a bedroom and asks him to undress. That’s when things get weird. Estee looks at least sixteen, if not twice the age of her plaid-boxered conquest. She is fully through puberty and in control of her body; Stevie is not and shaking with nerves.

If the genders were reversed, the scene would scream “possible rape” or, at the very least, “what a creepy dude.” But Estee is ostensibly doing him a favor — as it is understood when he emerges victorious after she fondles his penis and he “puts two . . . fingers in her vagina.” Even the full anatomical term betrays a residual innocence — one doesn’t know whether to wince or laugh.

“Are you crying? It looks like you’re crying?” says Emma Stone to Hill’s character, Seth, toward the end of “Superbad.” “No, I just have something in both my eyes,” he replies, blinking away from her gaze. If “Superbad” launched an entire subgenre that mocks male insecurity, “Mid90s” reveals, almost tenderly, the devastation of trying to hide it.

“I wanted to show what it’s like to try and make your way,” Hill said in an interview with Vulture, “and how acceptance happens so gradually or not at all.” Whether scraping his thigh with a hairbrush or trying to strangle himself with the wires of a Nintendo console, Stevie clearly doesn’t accept himself, despite his newfound friendships. What “Mid90s” celebrates—and laments—is how far boys are willing to go to gain that sense of self, even if it means risking one’s board and body in the process.