What part of the 14th Amendment doesn’t Trump understand?

The anti-immigrant, racist president now says he can deny citizenship to people born in the U.S. 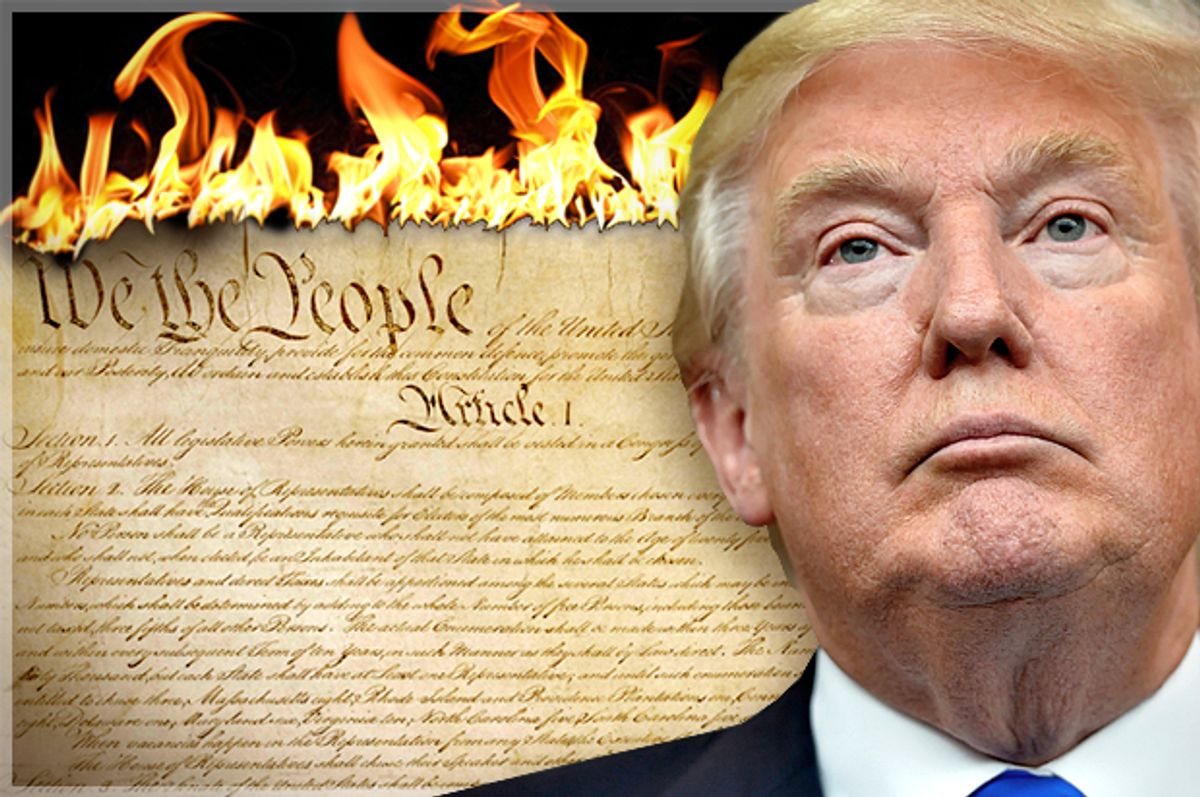 With days remaining before the mid-term elections, Donald Trump says that he plans an executive order that would end the practice of bestowing U.S. citizenship onto babies born in the U.S. to non-citizen parents, eliminating a long-term practice.

Such a dramatic move would certainly bring legal challenges, because the 14thAmendment of the Constitution actually extends citizenship to “All persons born or naturalized in the United States, and subject to the jurisdiction thereof, are citizens of the United States and of the State wherein they reside.”

Clearly, the president has been working overtime to make immigration issues the top concern for the elections. He doubled down on his vow again yesterday, as noted in a smart piece by The New York Times’ Peter Baker, of seeking a wide variety of fear-evoking pleas to close out the campaign against Democrats.

Among other things, the president moved this week to order more than 5,200 active military troops to the Southern border—more than we have in Iraq and Syria at the moment—to stand with 2,000 National Guardsmen and the border patrol police to block any attempt by a diminishing migrant caravan of mostly women and children walking to reach the U.S. border, likely still weeks away. Military troops are blocked by law from actually stopping migrants, of course, and committed to support activities.

Once there, of course, the migrants might—one by one—apply for asylum, which the president also wants to suspend, and then be detained in tent cities, despite court orders not to do so for more than 20 days.

We’re forced to conclude that this is not a response to an actual threat, but rather a political show, days before voting.

As The Washington Post noted, “President Trump is mobilizing the vast powers of the military and other parts of the federal government to help bolster Republican election efforts, using the office of the presidency in an attempt to dictate the campaigns’ closing themes. . .”

Apart from all else, it would be somehow delicious to see two new Trump-appointed Supreme Court justices dedicated to seeing the Constitution in literal terms to read that clause in Trump’s favor.

For what it is worth, just hours later, outgoing House Speaker Paul D. Ryan (R-Wis.) dismissed the notion of an executive order out of hand (only to earn a slap to the head from Trump), though Sen. Lindsay Graham (R-S.C.) said he would introduce a Senate bill to allow the elimination.

This issue apparently is about “birthright” status if you are more liberal, and “anchor baby” (or “chain migration”) if you see things from a more conservative viewpoint.

Recently in New York City, authorities happened for unrelated reasons to have come upon a building in the Bronx that was set up to receive and house a rotating number of Chinese moms who were coming here to give birth and then heading home, all with the idea that the children would be American citizens.

As Axios reported on its interview with the president, eliminating birthrights for such “anchor babies” would top even the ever-more threatening moves to stop immigration. be the most dramatic move yet in Trump’s hard-line immigration campaign. In any event, Trump’s power to do this through executive action is debatable to say the least.

In the interview, Trump said, “It was always told to me that you needed a constitutional amendment. Guess what? You don’t,” declaring he can do it by executive order. When told that’s very much in dispute, Trump replied: “You can definitely do it with an act of Congress. But now they’re saying I can do it just with an executive order.”

“We’re the only country in the world where a person comes in and has a baby, and the baby is essentially a citizen of the United States. . .  with all of those benefits,” Trump said. “It’s ridiculous. It’s ridiculous. And it has to end.”

Separate from the legal issues, there are the values issues involved. Increasingly, Trump believes that a majority of Americans want to feel fear from immigrants, both illegal and legal, and wants to do what he can to preserve jobs for Americans. However well intended those sentiments, what comes across both internationally and domestically is a kind of bullying effort with more than a hint of discrimination for non-white populations that want to come to this country to escape violence and deadly criminal organizations in their Central American countries.

Over and over, the Trump administration is attacking on a wide front the idea that America should be welcoming immigrants and refugees.

While few immigration and constitutional scholars believe it is within the president’s power to change birthright citizenship, some conservatives have argued that the 14th Amendment was only intended to provide citizenship to children born in the U.S. to lawful permanent residents — not to unauthorized immigrants or those on temporary visas.

The number of births to unauthorized immigrants reached a peak of 370,000 in 2006, according to a 2016 study by Pew Research. It then declined slightly.  While the Supreme Court has already ruled that children born to immigrants who are legal permanent residents have citizenship, those who claim the 14th Amendment should not apply to everyone point to the fact that there has been no ruling on a case specifically involving undocumented immigrants or those with temporary legal status.

In a 1989 Court ruling — U.S. v. Wong Kim Art — the majority found that a man born to Chinese-American parents in the United States was an American citizen.

Trump has railed against caravans of asylum-seeking migrants traveling from Central America, warning on Monday without evidence that there are “Gang members and some very bad people” mixed into the group, which he has referred to as an “invasion.”

The administration is mulling other tactics to block the migrants, including threats to cut off aid to countries who don’t impede such caravans, and an executive order and regulatory action that would place restrictions on the migrants’ ability to apply for asylum once they reach the U.S.

Increasingly, we are fighting about values, not policy language. Maybe that’s indeed how American regains its moral footing.