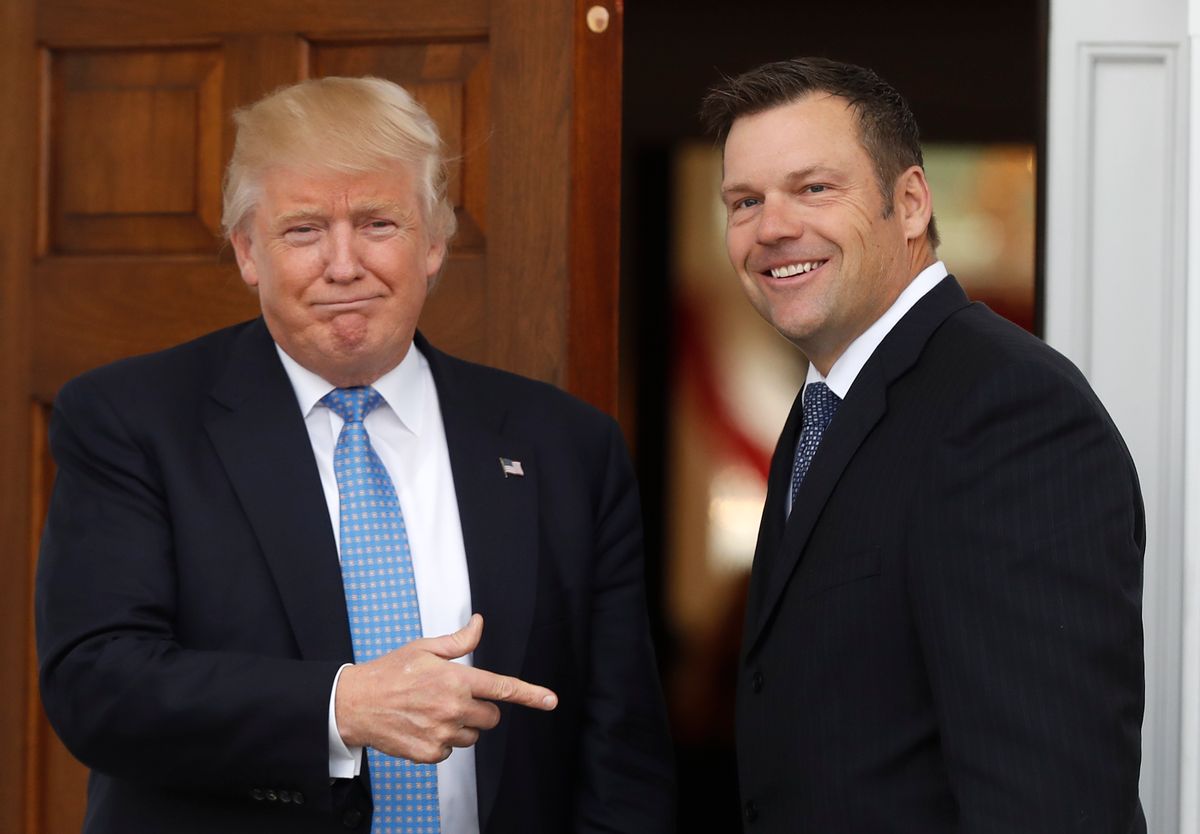 Kris Kobach, the Republican candidate for governor in Kansas, has not only aligned his politics with President Donald Trump. According to The Guardian, the politician has also allegedly taken "financial donations from white nationalist sympathizers" and has a long history of associating with groups that advocate "white supremacist views."

"Recent financial disclosures show that Kobach, a driving force behind dozens of proposals across the U.S. designed to suppress minority voting and immigrant rights, has accepted thousands of dollars from white nationalists," a new report from the outlet reads. "Donors include a former official in the Trump administration who was forced to resign from the Department of Homeland Security this year after emails showed he had close ties to white supremacists and once engaged in an email exchange about a dinner party invitation that was described as 'Judenfrei', or free of Jews."

Kobach is the current secretary of state in Kansas and was vice-chairman of Trump's short-lived election-fraud commission. Now, he is facing off against Democrat Laura Kelly in a neck-and-neck race for governor of the Sunflower State. While Kobach's political rise partly stands on the back of unsubstantiated claims of voter fraud, less has been said about the thousands of dollars he has reportedly received from groups with alleged white nationalist agendas.

"Public financial records show Kobach received political contributions from US Immigration Reform Pac, a political action committee closely affiliated with John Tanton, a retired ophthalmologist who is known as the founder of the modern American anti-immigrant movement," The Guardian reported. "The Southern Poverty Law Center (SPLC), which tracks hate groups, studied decades of Tanton’s correspondence. It found Tanton had close contacts with Holocaust deniers, white supremacists and antisemites. In one 1993 letter, Tanton wrote: 'I’ve come to the point of view that for European-American society and culture to persist requires a European-American majority, and a clear one at that.'"

Financial support from the U.S. Immigration Reform PAC is not just responsible for Kobach's rise, but for the launch of his political career, giving him $10,000 in 2003 and 2004, according to Politico. Kobach received another $2,000 for his gubernatorial race this year from the PAC, which is now run by Tanton's wife, Mary Lou Tanton. The group also contributed to Iowa congressman Steve King's campaign and Republican congressman Mo Brooks in Alabama. The latter has said "illegal aliens are a plague on America," and the former has a record of espousing racist and xenophobic views.

Paul Nachman is also a small donor of Kobach's campaign and someone SPLC describes as a "Montana-based extremist who regularly writes for Vdare, an overtly racist blog that serves as a hub for white nationalists and antisemites," according to The Guardian. Another donor is Ian Smith, a former Department of Homeland Security official, who resigned after The Atlantic published email correspondence between Smith and "white supremacists and racists." And, according to The Guardian, these men stand in the company of others.

"Kobach has been careful to avoid overt white nationalist language in his political speech, but he is not known to have refused the endorsement of white nationalists or their money," The Guardian wrote. "After losing a 2004 bid for Congress, Kobach worked for more than a decade for the legal arm of a Tanton-founded group, the Federation For American Immigration Reform (Fair). Kobach has defended the work, saying the organization simply wanted to enforce strong rules against illegal immigration."

Kobach has been at the forefront of GOP policy on immigration in recent years. "Kris Kobach has been a close and early ally of Donald Trump and a lot of his ideas have been adopted," Zachary Mueller, part of the communications team of the immigration reform group America’s Voice, told The Guardian. "I think he is smart enough to know where the lines are in terms of his language because he won’t want to be labeled a white nationalist in public, but we can look at his policies and his friends."

"The white supremacist guys, they love Kris Kobach because he can put on a suit, have the fancy degrees, and translate their ideas into something that is more palatable," he continued. (Kobach has graduated from top universities, including Harvard, Oxford and Yale.)

A spokesperson for Kobach's campaign responded to The Guardian's report by asserting that he cannot be a racist, because she is black and has never heard witnessed him saying anything racist. “I am black, and I am his closest staff member,” Danedri Herbert told the outlet. “I spend more time with him than any member on his staff. He is not a racist.”