Watching election returns with the resistance: The blue wave was modest, but women won't quit

Progressive women have forged new bonds in the Trump era, and they know there's a long fight for justice ahead 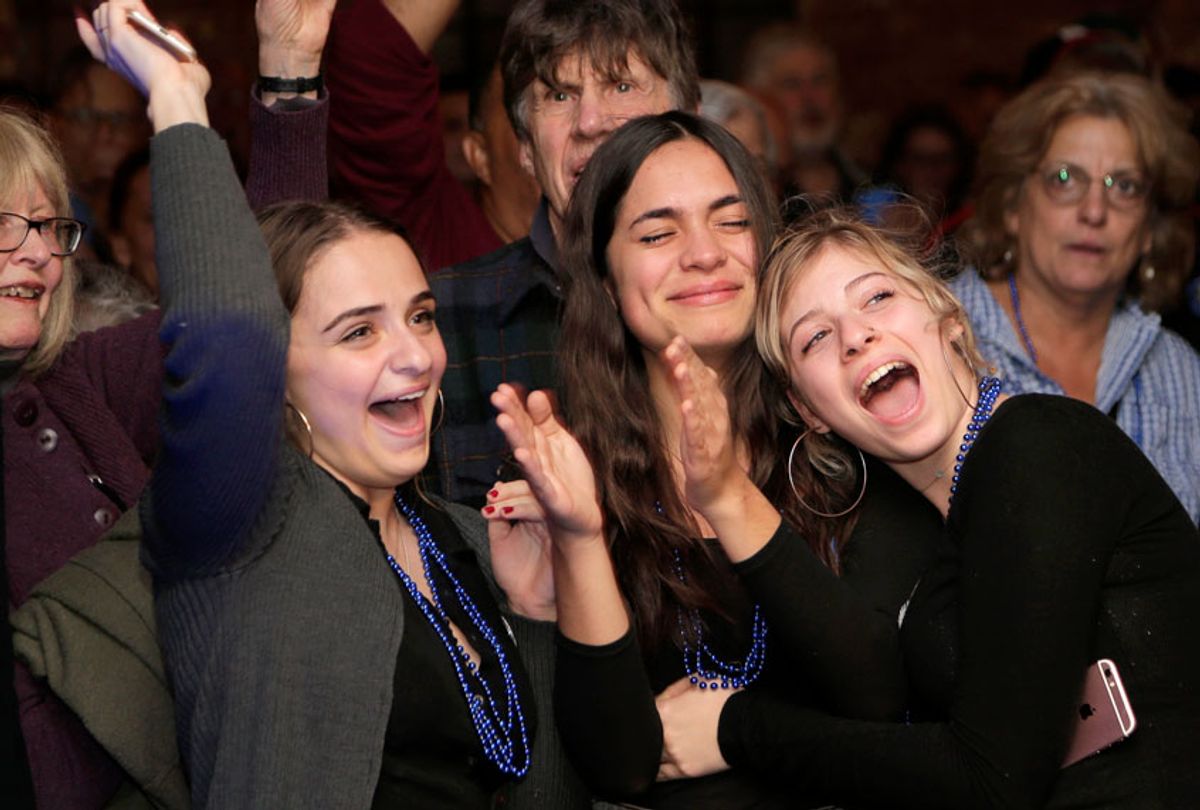 For a lot of women of more feminist inclinations, the 2016 election was a wakeup call. Going into the election, there was significant social pressure in even the most progressive circles — some would argue especially in progressive circles — for women to tamp down their enthusiasm for Hillary Clinton, the first viable female presidential candidate. Guilt trips were readily handed out to anyone who thought it might be a big deal to put the first woman in the Oval Office. Instead the expectation was to act as if sexism were a thing of the past and Clinton's victory was an unremarkable inevitability.

Then she lost to a leering misogynist with no redeemable human qualities, and yes, while she did have a healthy margin of nearly 3 million in the national popular vote, the outcome made clear that sexism is not nearly as dead as feminists were shamed into pretending to believe it was.

In the two years since, there's been an outpouring of female anger and activism, with millions hitting the streets for the Women's March and a record number of women running for office, mostly as Democrats. The activism has been invigorating, but the question remains whether it will move the needle with the broader public. After all, 41 percent of female voters cast their ballots for Trump, meaning he only did slightly worse than Mitt Romney, who got 44 percent of the female vote in 2012. The 2018 midterms offered the first real measure of whether the feminist backlash to Trump would make a difference, or whether women's rage is not enough to turn the tide.

I joined a group of grassroots female activists, working with a group called Women’s Health and Reproductive Rights, or WHARR, in Brooklyn on Tuesday night. WHARR, is just one of many such local political groups that have sprung from the surge of feminist energy after Trump's disastrous win in 2016. Its members have spent the election season doing the unsexy but absolutely necessary work of canvassing for local Democrats like Liuba Grechen Shirley and Max Rose, who were challenging Republican incumbents in the New York area. While Shirley failed to unseat incumbent Rep. Peter King on Long Island, Rose defeated Rep. Dan Donovan of Staten Island in one of the evening's upset victories.

As election results began to roll in, the women of WHARR described how, while they had known that sexism and racism are still major problems, Trump's win in 2016 sounded the alarm on how pervasive bigotry really is.

"It just opened my eyes to how predominant rape culture is in our society," Amy Bettys explained.

Marta Schaaf was on an overnight flight on election night and when the flight attendant told her who won, "I vomited on the plane."

"I feel like it’s been one long vomit ever since," she added.

While many of these women were cautiously optimistic about the Democrats gaining some ground -- as ultimately happened, after some tense moments -- the tone of the night was more one of grim determination than the sunny optimism they brought to 2016, when most felt that Clinton would sail to an easy victory. They described the past two years as a time of putting their noses to the grindstone and working to change politics wherever they can, with a special focus on tossing conservative Democrats out of the New York state legislature.

“I don’t want to be surprised again. I don’t think I can handle that wrecking ball of emotions," Jessie Losch said.

“I’m like my own disaster-prepper," she noted with a laugh, saying that she views this fight as granular -- one hard-won seat at a time.

"We’re on a slow side into fascism," said Shannon Stagman adding that she viewed the 2018 election more in terms of survival — a check on Trump's power — than some kind of dramatic turnaround for the country.

As the returns came in, it became clear that the blue wave many Democrats were hoping for would be somewhat muted. Democrats took a House majority, as expected, and won some big gubernatorial races in heartland states like Kansas, Michigan and Wisconsin. But results in the Senate were clearly disappointing and many of the party's most charismatic candidates, like Stacey Abrams in Georgia, Andrew Gillum in Florida and Beto O'Rourke in Texas, were defeated. (Abrams has yet to concede, but trails significantly.)

But while the tone at Threes Brewing, where WHARR was holding their watch party, was solemn, the attendees who had been hustling for two years did not seem crushed. The willingness of their fellow Americans to back the nastiest candidates no longer surprises them. Instead, they were focused on the fact that the midterms were just one battle in what is going to be a very long war.

Loesch explained how she had been planning to matriculate in grad school for theater after the 2016 election, but put that on hold for a year. Now she's applying now for a different graduate program, "in public health and reproductive and women’s health," effectively reorienting her entire life toward this fight.

What became clear over the course of the night is that the fight itself is invigorating these women. They spoke glowingly of how they'd made dear friends and found a sense of community in organizing for progressive politics.

“It’s given me an outlet for my emotional angst," Schaaf said, noting that she was especially pleased to meet friends outside of her immediate age group and her world of public health work.

No matter how well or poorly the Democrats did this week, the women of WHARR were quite clear that there will be no going back. Clinton's loss to Trump in 2016 revealed the ugly truth about the misogyny, racism and cruelty below the surface of American society, and that knowledge can never be unlearned. That knowledge also made these women determined to keep working — voter by voter, seat by seat, bill by bill — to make things better. The fight isn't just about winning. They fight because it's a hell of a lot better than just giving up.