Double recount in Florida? Andrew Gillum and Bill Nelson may not be done as races tighten

Some reports suggest that Ron DeSantis' lead over Gillum is down to 15,000, while Nelson has also pulled even 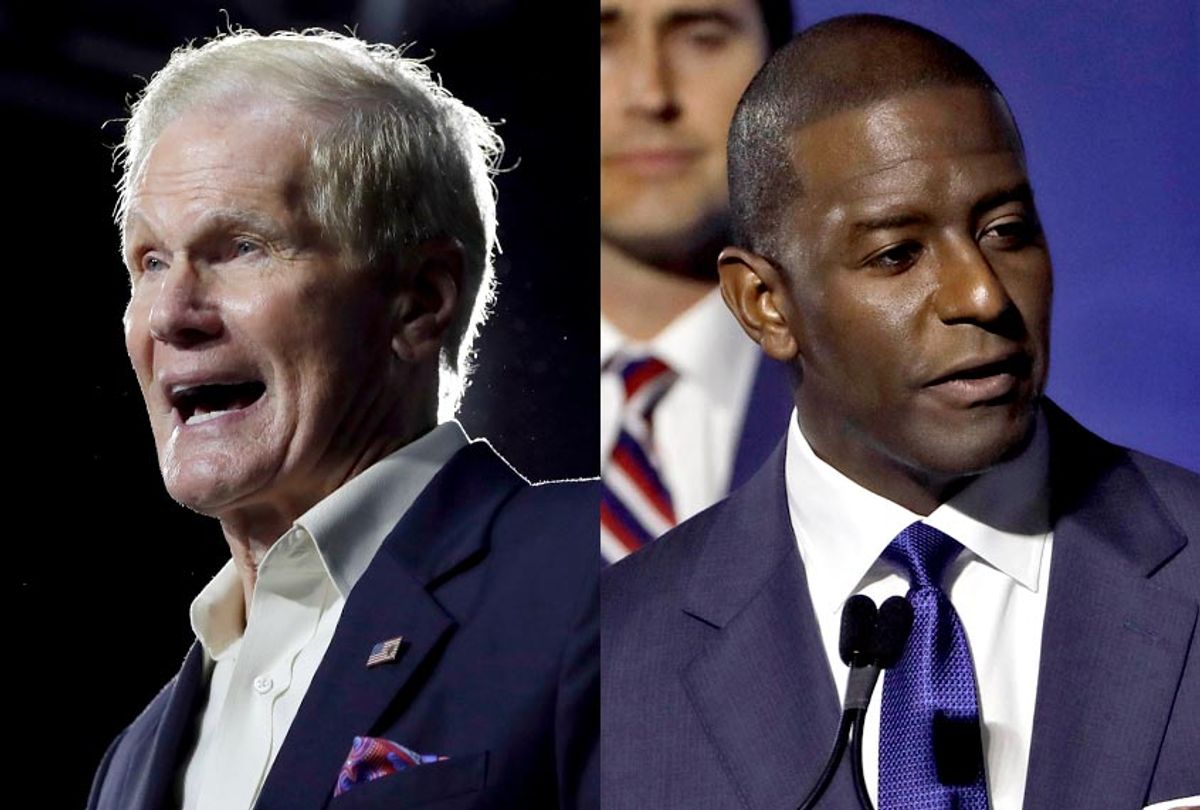 Democrat Andrew Gillum's campaign is now hoping for a recount in the tight governor's race in Florida, after Republican Ron DeSantis' margin of victory fell to within 0.02 percent of the threshold for a legally required recount.

The Orlando Sentinel reports that DeSantis leads Gillum by 0.52 percent, a margin of less than 43,000 votes. Any margin of 0.5 percent or lower triggers an automatic machine recount. American Urban Radio Networks correspondent April Ryan reported that Gillum's camp has claimed DeSantis' lead has shrunk to 15,000.

Gillum conceded the race to DeSantis Tuesday, but if the margin falls below 0.5 points the recount will automatically go forward unless the Democrat formally declines it. He has made clear he does not intend to do that.

“On Tuesday night, the Gillum for Governor campaign operated with the best information available about the number of outstanding ballots left to count,” Gillum spokeswoman Johanna Cervone added in a statement. “Since that time, it has become clear there are many more uncounted ballots than was originally reported. Our campaign, along with our attorney Barry Richard, is monitoring the situation closely and is ready for any outcome, including a state-mandated recount. Mayor Gillum started his campaign for the people, and we are committed to ensuring every single vote in Florida is counted.”

If a machine recount is ordered, officials in each county must submit the second round of unofficial returns by Nov. 15, the Miami Herald reports. If a machine recount finds that one candidate is leading by 0.25 or less, a much more complicated and time-consuming manual hand recount may be triggered. In Florida, each of the state's 67 counties administer their own recounts.

It remains to be seen whether Gillum can gain enough votes to trigger a recount, but Florida will definitely see at least two recounts in its U.S. Senate and agriculture commissioner races.

The Orlando Sentinel reports that incumbent Democratic Sen. Bill Nelson trails Republican Governor Rick Scott in the race by just 0.26 percent, a margin of fewer than 22,000 votes. If the race gets any closer, it will go to a hand recount rather than a machine recount. Nikki Fried, the Democratic candidate for agriculture commissioner, leads Republican Matt Caldwell by just 0.06 percent, just over 4,000 votes.

A number of ballots remain to be counted in Broward County.

Democratic lawyer Marc Elias, who is representing Nelson after working on recounts for former Sens. Harry Reid and Al Franken, said that both candidates have an equal chance of winning the recount.

Scott's campaign accused Nelson of trying to “steal” the election.

“In his own words, Nelson's lawyer says this effort isn't about making sure every vote counts or getting a fair count,” Scott spokesman Christ Hartline told the Sentinel. “No, for Bill Nelson- the task is getting the ‘win’ … no matter what. Let's be clear: When Elias says ‘win,’ he means ‘steal.’ It is sad and embarrassing that Bill Nelson would resort to these low tactics after the voters have clearly spoken.”

Elias said that the Nelson campaign simply wants every vote counted and is willing to fight it out in court.

“It’s important every voter who cast a ballot has it counted and counted accurately,” he said. “We will not hesitate to address that in the courts. We will not allow people to be disenfranchised due to administrative procedures that disadvantage minority voters.”