Investigations are coming: Democrats will make government ethics the priority for 2019

Trump escalates his obstruction of justice, protesters hit the streets and Democrats now have a focus for 2019 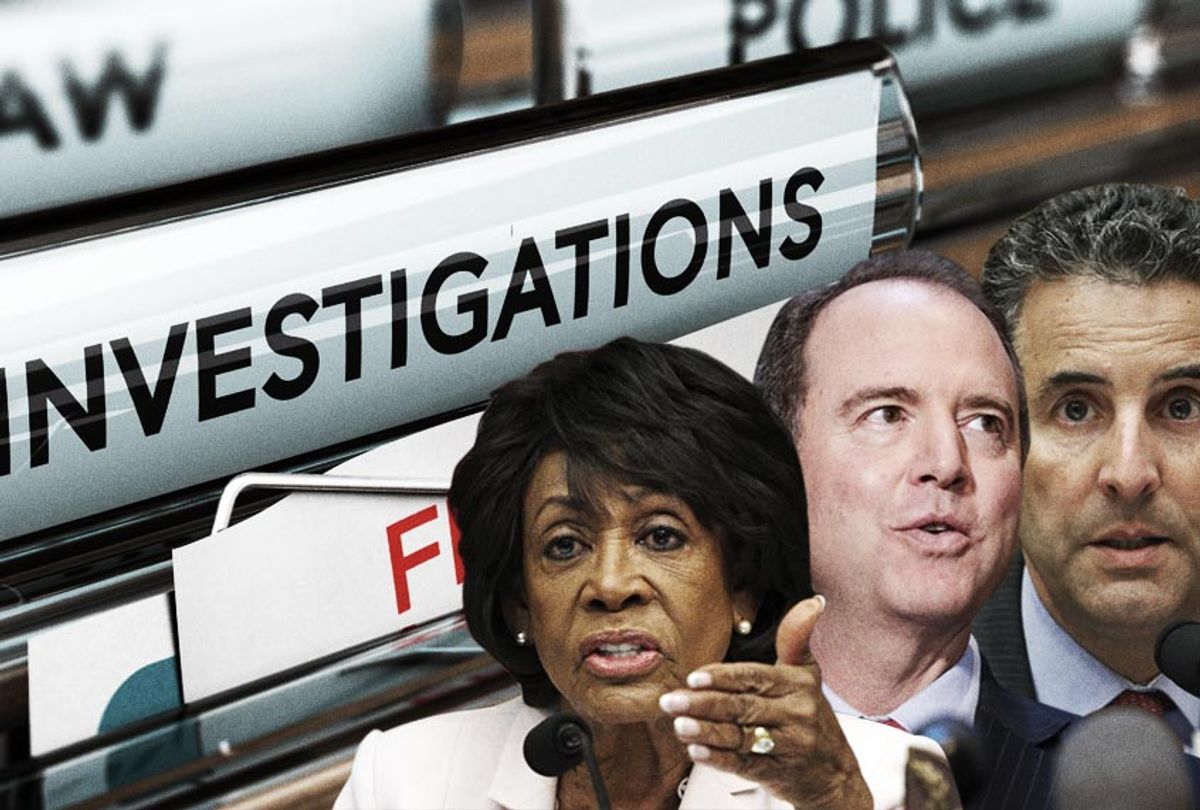 Shortly after Democrats won the majority in the House of Representatives, Ronald Klein, writing for the Washington Post, beat the competition in offering the worst hot take, arguing that "a Democratic majority charging out of the gate with investigative hearings would be making a mistake" and that Democrats should instead "deliver on kitchen-table issues" such as improving health care, raising the minimum wage and improving infrastructure.

This was a bad take not just because of Klein's shockingly naive inability to understand that Senate Republicans and Donald Trump will laugh at any attempts to shame them for killing any such bills. He's also wrong about the politics of the moment. Yes, voters want health care and more money in their pockets; voters always want that. But the reason this election saw the highest voter turnout for a midterm since 1966 is not because those needs are more pressing than ever, but because Democratic voters feel a sense of urgency about the unparalleled corruption of the Trump administration.

I saw this with my own eyes on Thursday evening, when I attended one of the dozens of emergency protests organized by MoveOn in response to Trump's firing of Attorney General Jeff Sessions, as part of an apparent attempt to end Robert Mueller's investigation into his campaign's possible collusion with Russian intelligence to steal private information from Hillary Clinton's campaign. Thousands of people showed up on last-minute notice, and the crowd swelled as bystanders joined up after realizing what the protest was about. Since this began in Times Square, there were some red-state tourists yelling at the protesters, but overall, people on the streets of New York were highly supportive.

There's a "desire of the everyday Americans to get their voice back," Rep. John Sarbanes, a Maryland Democrat, told me on the phone Thursday. He said the newly elected first-time congressional representatives report that their constituents want restoring democracy and accountability to government to be a top-line priority once the Democratic majority is gaveled in.

Sarbanes intends to lead the way by introucing a bill that would shore up the Voting Rights Act, closes some loopholes in ethics laws and regulate campaign finance more strictly. He says he has the support of Democratic leadership and plans for this bill to be the first one offered in the 2019 legislative session.

Bringing the bill up as HR1, denoting that it's the first bill of the year, will be a "big-bang, thunderclap statement back to the electorate," Sarbanes said, letting voters know the Democrats have put a priority on ending government corruption and protecting the right to vote.

Along with Sarbanes' bill, we will clearly see efforts by the House Oversight Committee — and likely many other House committees — to investigate the overwhelming number of scandals and possible crimes committed by Trump and his administration. In September, Democratic members of the Oversight Committee posted a list of 64 subpoena requests they had made regarding corruption in the Trump administration, all of which were of course blocked by the Republican majority. That list has been widely viewed as a statement of intent, signaling that Democrats will not hold back in trying to unearth Trump's dirty secrets.

It's a "two-track approach", Sarbanes explained, in which Democrats will "call  out the lack of accountability" while also introducing a bill that "puts forward a set of standards about howthings should operate."

A coalition of dozens of organizations has issued a letter of support for the bill, writing: "Powerful corporate and wealthy interests regularly defy the foundational principles of fairness, equity, ethics, accountability, and respect for the rule of law, and we are heading towards an impending constitutional catastrophe."

That coalition includes the expected good-government groups like Citizens for Responsibility and Ethics in Washington and the Sunlight Foundation, but also groups focusing on economic and human rights issues, such as the NAACP and the Working Families Party. All of which makes sense, as it's becoming clear that voter suppression and campaign finance corruption are the root causes that make progress on so many other issues maddeningly out of reach.

Obviously, Democrats only hold the House in the upcoming Congress, and if they pass this bill -- as they are expected to do -- it will almost certainly die in the Senate, where Republicans will probably have an expanded majority. There's little reason to hope Republicans can be shamed into supporting values that every politician claims to espouse, such as transparency and fair elections. This is the same party, after all, that has been blatant about voter suppression and has shamelessly run interference for Trump as he enriches himself from public office and tries to hide any evidence of Russian collusion.

Sarbanes acknowledged this, but said he still believes passing the bill through the House should be a priority. "This bill sets the table for the broad discussion of how we get our democracy back to the expectations of the public," he said.

In a recent interview with Matt Taibbi of the Rolling Stone, Sen. Bernie Sanders, while emphasizing his hope that Democrats continue to focus on economic issues, stated that Democrats "can chew bubble gum and walk at the same time," and that "investigations are absolutely appropriate" under the circumstances.

Whether such investigations will turn up any important new information remains to be seen, of course, but considering that Trump could not possibly be acting any guiltier with his brazen efforts to obstruct justice, it would be unwise to bet against the Democrats. Impeachment is still unlikely, as there's no possible way Senate Republicans would ever vote to remove Trump from office, but it's still critical to find out how deep the rot goes in the White House. The next presidential election is now less than two years away -- voters have a right to know how dirty the guy at the top of the Republican ticket really is.