It took a dog to make me a better human

Dog-hater might be too strong a term, but it's close... And then came Laffy 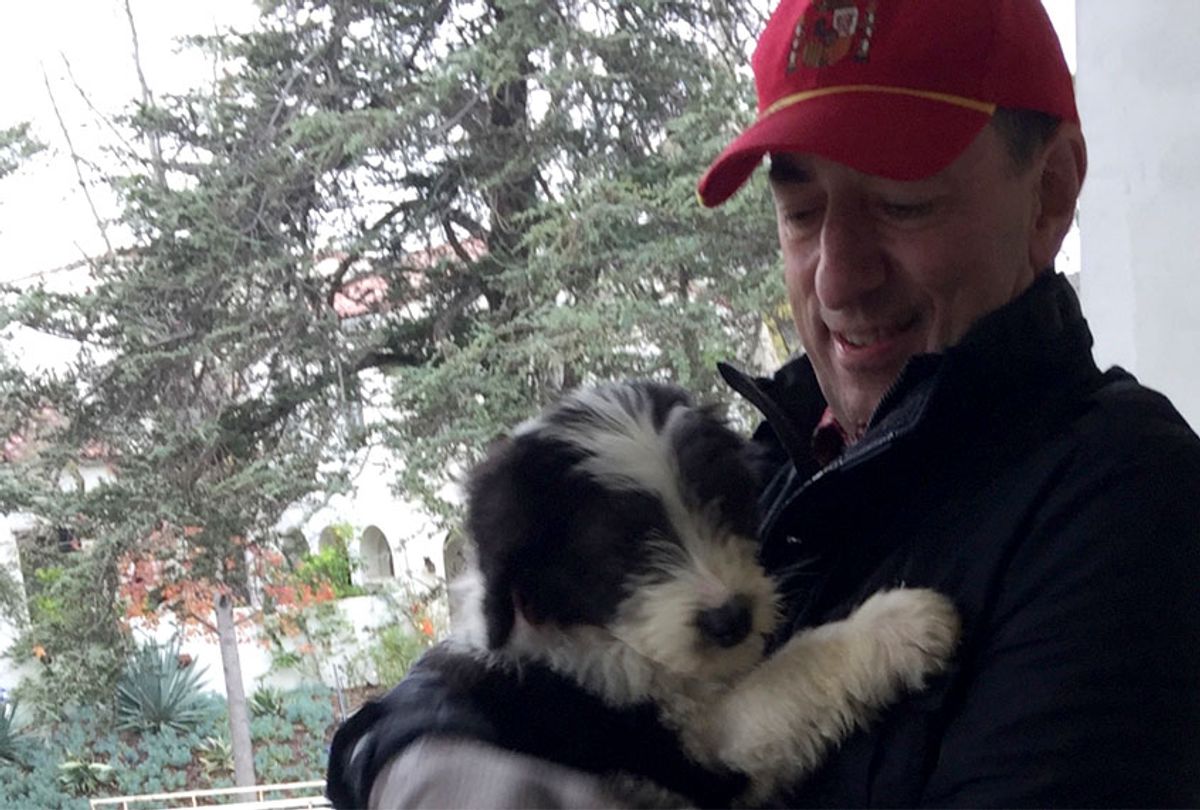 I never had a dog. Never wanted one. As an allergy kid, my only pet was a cricket, caught in our garden to occupy a little bamboo cage a family friend had brought from Japan.

My most memorable childhood encounter with a dog was a yappy mutt next door to my elementary school that chased me around the playground and bit my leg. I’ve been afraid of them ever since.

In my doomed starter marriage, we were at that point when most couples get a dog as a trial balloon for kids. We could only commit to goldfish. One morning I found ours flopping on the floor half-way to the window. Making a break for it, like I would a couple of years later.

What followed was two decades of dogless bliss. I divorced doglessly, dated doglessly. I met my current wife, Ilene, who, among other lovable qualities, was dogless.

Then we moved from New York to Los Angeles, to a block infested with dogs and before long our 10-year-old, Kingsley, was yearning for one of his own.

“Imagine me frolicking in our backyard with my own puppy!” he pleaded, adding with typically theatrical spin: “One boy, one dog, one destiny . . . .”

His 12-year-old brother, Diego, wanted a batting cage. I wanted a new kitchen floor. But Ilene calls Kingsley “Marilyn,” after the blonde, normal Munster who was regarded as a freak by the rest of the family. A boy who wants a dog? What’s wrong with him?

I’ve heard all the sound reasons to get kids a dog. How they teach responsibility, blah, blah. There’s also a less sound reason: Jewish Mother Guilt. Which is how we got ours.

A friend was shooting a humor piece for TBS.com and needed little-boy bit players. When the big day rolled around, Kingsley jumped into the Prius all excited to be “on TV” — only to discover his Mom forgot to get him a work permit. Oops. No shoot. Kingsley was crushed.

Later that day, I caught the two of them at her computer, giggling. That seemed odd, given the calamity that had just befallen him. Until I saw what was on her screen . . . .

“You promised him what?! No, no. This is not happening.”

Ilene tried to calm me down: “Don’t worry. It’ll be hypoallergenic.”

Kingsley’s dream had finally come true. My nightmare had only just begun.

On a rainy weekend January, our trusty manny, Nick, drove Kingsley 12 hours to Utah to pick up a three-month-old Sheepadoodle — an Old English-poodle mix — dubbed “Lafayette” by our Hamilton-obsessed son.

Maybe this wouldn’t be so bad after all! I mean, he matches.

Then I saw it — my first steaming pile of poop. On our overpriced, pretentious living-room rug. Understand that I’m a guy who once lived without a coffee table for five years because I couldn’t find the right one. I’m a tad particular about my surroundings.

“It’s like a moving toilet!” I screamed, frantically spritzing the floors with Nature’s Miracle anti-marking spray.

Turned out he had Giardia, a parasite dogs can get from bear poop.

“Downside of getting a dog in Utah,” Dr. Goldman, our new vet explained.

“Downside of getting a dog,” I joked.

I asked how to stop him from nipping the boys’ heels with his needle-like puppy teeth and chewing their sneakers to ribbons and running toilet paper rolls through house like something out of an old Warner Bros. cartoon.

Dr. Goldman described an elaborate game where you sit inside a circle of things he is allowed to chew and put things he’s not allowed to outside the circle and . . . . Halfway through his explanation, I knew I’d never have the patience or discipline to pull it off. Just like I couldn’t keep him locked in his crate at night when he was barking and whining and leaving us as sleep-deprived as when we had newborns.

“Puppies are like babies,” people say. Yeah, except they’re not related to you. They’re not even the same species. One night, about a week in, I was trying to watch "Vikings" and could barely hear the screams of English monks being axed to death over Laffy’s plaintive yelping.

That was it. I couldn’t take it anymore. The lava flow of diarrhea. Walking him in the pouring rain. Feeling obligated to play with him because no one else wanted to. Including Mr. “One Boy, One Dog, One Destiny.”

I started keeping a diary called “I Hate My Dog.”

“Just let him into your heart,” Ilene’s dad advised.

She had something else in mind. Racked with yet more guilt for foisting this disaster on us, especially me, Ilene called a “family meeting.” And we’ve never had a family meeting.

“How long is this gonna take?” Diego asked into his phone. “I’m supposed to go to Ryan’s to play Fortnite.”

But Kingsley’s hackles went up faster than Laffy’s at the sight of a UPS guy as Ilene laid it out: “I think we all know this was a mistake, so I made a plan for him to go Vermont and live with Aunt Deborah” – her sister and her two girls.  “Ava and Shoshana really want a dog. He can run around, in the countryside….”

Silence from Kingsley. Then he shook his head firmly: “You’re not giving Laffy away.”

“But we have to force you to play with him — the puppy you begged us for.”

Deaf ears. Kingsley was curled up in a fetal ball, weeping hysterically: “Laffy is the best thing that ever happened to me!”

The Family Meeting ended in a puddle of tears. In bed that night, Ilene reminded me she’d already bought the plane tickets: “Once he’s gone, he won’t miss him.”

She couldn’t wait to get her life back.

But now I was the one shaking my head: “You can’t give a boy a dog and take him away a month later.”

We were talking about Kingsley, but the boy was really me. I may have lost the fight that got us this damn dog, but I wasn’t going to lose this one. Screw the plane tickets, I said. “Laffy stays.”

Dogs are emotional terrorists. In the millennia since the first wolf peed on a cave painting, they’ve hacked our neurological wiring so that even a few seconds of eye contact elevate oxytocin levels in both dog and owner. Just like babies do. And as with my biological children, I now believed there was no puppy cuter than Laffy.

It wasn’t just me. On Larchmont Blvd., our local strip of hipster coffee shops and artisanal candle-makers, people would use words like “majestic” to describe his regal posture and “totes adorbs” for his bouncy playfulness.

“Omigod! What is he?” demanded an aspiring-actress gazing into his hopeful brown eyes and stroking his enormous polar-bear paws.

“A Sheepadoodle,” I happily obliged.

Where was this dog when I was single?

I started going to twee pet shops for cow tracheae, bull penises and limited-ingredient-grain-free-single-source kibble. We’ve already thrown out one rug — I don’t care. That’s how much I love the feeling of his warm body against my legs when he tries to “herd” me, his hair as soft as a shag bathmat. For his first birthday, I took him to Malibu to herd actual sheep. My home screen isn’t my wife or my children — it’s Laffy. I’m the only one who lets him lick my face.

You don’t get that from a cricket.

Overnight, I became a dog person. Far from being afraid of them, I take Laffy on doggie playdates and to a muddy city park where a random group of owners show up to throw balls and talk about politics or last night’s "Ozark."

Not random, actually. A community. That I was now a part of. That made me happy.

In my toxic-bachelor days, my nickname was “Mr. Warmth,” but I didn’t realize how closed off I still was, even as a happily-married family guy. Like, I used to talk to my neighbors when and if I had to. Now I stop them in the street — if they’re holding a leash. Because Laffy wants to be pals with everyone. Our friends have a grieving golden doodle who’ll barely get up since their other dog died. But when Laffy comes over, Skippy’s his old self again.

When he let me into his big heart, he got me to open up mine.

Ilene said, “It took a dog to make you human.”

As usual, she’s right. Would it be crazy to get two?