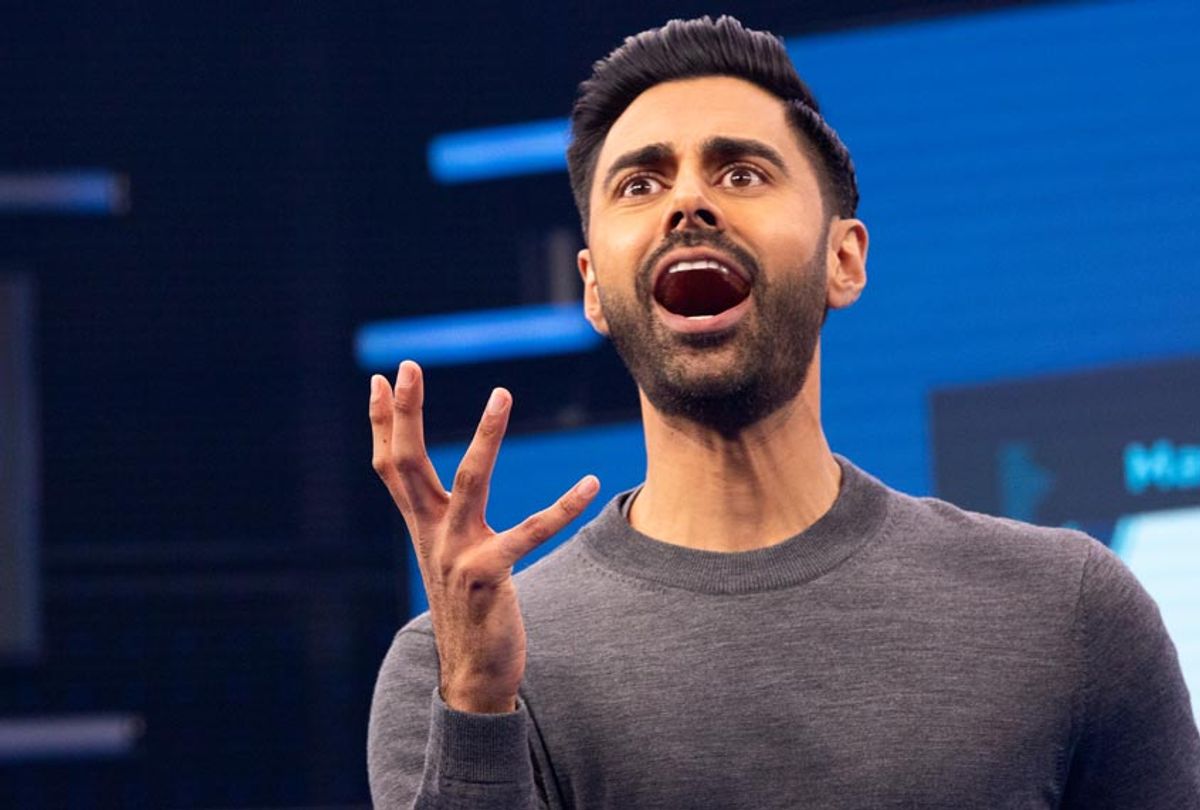 In three short episodes of his Netflix show “Patriot Act,” Hasan Minhaj has achieved something few, if any, many have expected: “The Daily Show” alumnus has evolved the current events talk variety format beyond the structure set in place by “The Daily Show” as it was realized by Jon Stewart.

Consider the importance of this. Ever since “The Daily Show” merged late-night talk variety’s host-behind-a-desk format with a hard focus on satirizing current events, all of its offshoots have more or less cribbed that structure. Segments featured “Last Week Tonight with Jon Oliver” are delivered almost entirely from behind a desk.

On “Full Frontal with Samantha Bee,” the host presents her segments front and center, assisted by a team of correspondents who deliver field pieces. There’s no sense in messing with structure that works, especially when the hosts of these shows built their reputation as “Daily Show” correspondents.

But a person can tell that Minhaj, Stewart’s final hire during his time at the helm of Comedy Central’s tentpole program, is aware that the last thing this space needed was a junior version of those other series. Hence he bucks the whole newsroom bit almost entirely — that is, save for the deeply researched dives on topics he cares about, and of which the public should have more awareness.

Standing in front of a floor to ceiling LED screen that plays everything from video to pie charts to crazy graphics, Minhaj presents “Patriot Act” as if it were an amped up TED Talk as opposed to a comedy show masquerading as news. That’s smart. People love TED Talk brand’s information dumps masquerading as intimate conversations.

In the first episode, he describes the set as what would happen if “Michael Bay directed a PowerPoint presentation,” and that’s pretty accurate; the screen is as action packed as his sets, clocking in at under 30 minutes each are, information heavy.

But watch Minhaj dissect the partisan attempts to kill affirmative action. Follow him as he breaks down the hypocrisy of the Western media falling all over themselves to call Saudi Crown Prince Mohammed bin Salman a reformer shortly before he would be implicated in the murder of Saudi journalist Jamal Khashoggi. Or enjoying his skewering of Amazon.com, the target of last Sunday’s episode.

All of these episodes contain the air of evolution about them, not only in how comedy can be utilized in service of contextual analysis of current events and politics, but in how a performer can personalize the tilt of that analysis without sacrificing the universality of its reach. This Sunday, by the way, he’s taking on America’s reliance on oil and examining our energy policy.

“Patriot Act” is the latest Netflix effort to secure a toehold in the talk variety space, preceded by “The Break with Michelle Wolf” and Chelsea Handler’s series prior to that, as well as 19 episodes of “The Joel McHale Show Starring Joel McHale.” Netflix clearly believes it has something special with “Patriot Act,” having committed to a 32-episode order before the finished product even aired.

Like Minhaj, Wolf is an alumnus of “The Daily Show” whose profile skyrocketed after she hosted White House Correspondents Dinner.

Minhaj did the honors in 2017, when Trump refused to show up. Trump did not attend the 2018 edition either, but Sarah Huckabee Sanders did, a fact Wolf ensured we’d never forget by calling Sanders a liar to her face.

Nestled within Minhaj’s Correspondents Dinner is a revolution that may have informed the ways his show would differ from “The Daily Show.” (along with describing Comedy Central as “basically an internship for Netflix.”)

“You know what’s crazy? Every day on ‘The Daily Show” we do these jokes all of the time,” he told the White House Correspondents Dinner attendees. “We’re like: ‘The administration lies. Trump flip-flops.’ It doesn’t matter. His supporters still trust him. It has not stopped his momentum at all. It’s almost as if ‘The Daily Show’ should be on C-SPAN. It has left zero impact. It’s true. And I realized something: Maybe it is because we are living in this strange time where trust is more important than truth.”

Even then he was on to something.

During the two years Minhaj took to develop “Patriot Act,” several truths about talk variety have crystallized. The first and most obvious is that producing nightly talk variety series in this era of accelerated unpredictability is an altogether different grind than producing a weekly series.

One requires agility and flexibility, and the ability to react quickly to whatever egomaniacal insanity the president might unleash at any moment. The other demands endurance and a willingness to resist the undertow of the headline rapids, aiming for depth and currency while maintaining a comedic edge. It’s the difference between, say, wrangling the nightly news and producing a “Frontline” episode.

The other acknowledges that audiences have shifted away from valuing impartiality in their news, embracing points of view and strong personality instead. This speaks to Minhaj’s point about trust. It also explains why the stand-up adjacent style of “Patriot Act” feels livelier and more original than other satirical series mimicking the traditions and conceits of the evening news.

Both stand-up specials and newscasts play on familiar entertainment concepts. Both are personality driven. Helping the latter aspect is Minhaj’s puckish charisma: even as he drops harsh truths, a slight smile perpetually plays around the edges of his facial expressions, and his eyes always appear to be slightly wide with – shock? Glee? Depends on the topic at hand.

Returning to that notion of evolution, though, Minhaj succeeds by contextualizing and critiquing topics that are interesting to him — not merely as Hasan Minhaj, Peabody-award winning comedy star, but Hasan Minhaj, guy who is constantly bemused and shocked at the corruption and idiocy blossoming unchecked around him.

Don’t get me wrong here: the satirical news-style series remain a vital sanity keeper in these crazy days. And Minhaj isn’t alone in capitalizing on his personality to dispense topical sets informed by  journalistic research. Sarah Silverman’s doing a great job of that on Hulu's “I Love You, America,” though that series focuses on interviews and interactions with people whose views are the absolute opposite of her own.

Bee, meanwhile, highlights under-represented points of view in late-night, building comedic segment pieces around current events topics that stand to impact women, minorities and oppressed groups. Oliver does this as well, but even he concedes that his male-ness results in blind spots in a lot of these areas.

Whereas in the same way that current “Daily Show” host Trevor Noah’s internationalist perspective has benefitted that show within an administration that’s emphatically nationalist, Minhaj’s identity as an Indian American, and a Muslim, and a person of color, and a man, and a millennial, and everything else, shapes his choice of topics and informs his entry point into taking them on.

And it makes sense that he conceived of this direction after covering a 2016 political convention and realizing the extent of our leadership’s ignorance. But the person who provided this insight was Bill Clinton.

In answer to a question about what inspired him to create "Patriot Act," Minhaj recalls watching Clinton use his “go-to moves” at the Democratic National Convention, acknowledging the minorities in the audience.

Then he came around to giving a shout out to Muslims “’Yeah! You guys are here! Muslim Americans!’” Minhaj recalled Clinton saying. But then he added, “Stay here. Stay here! Help us find the terrorists. Help us win.’” Everyone around him responded with enthusiastic applause.

“I remember standing there and being like, ‘Bill, I hate to tell you this . . . I don’t know any terrorists.’ I’m not Terrorist the Bounty Hunter,” Minhaj says. “. . .He thought our only value was to help find terrorists, right?”

“It was one of those things where I thought about it for a long time,” Minhaj continues, eventually coming to a wise conclusion.

“I was like, ‘Look, I’m not gonna get my humanity from Bill fucking Clinton. . . . He will never understand where I’m coming from, my POV, the things my community has had to go through. We have to claim that shit on our terms.’ So I just started working on the show.”

“Patriot Act,” he says, is his alternative to his initial idea, which was to write an angry blog post.

How fortunate that he chose to think bigger, and differently, while remaining true to who he is, how he thinks and what he can do to transform the way we think. . . even as we’re laughing.