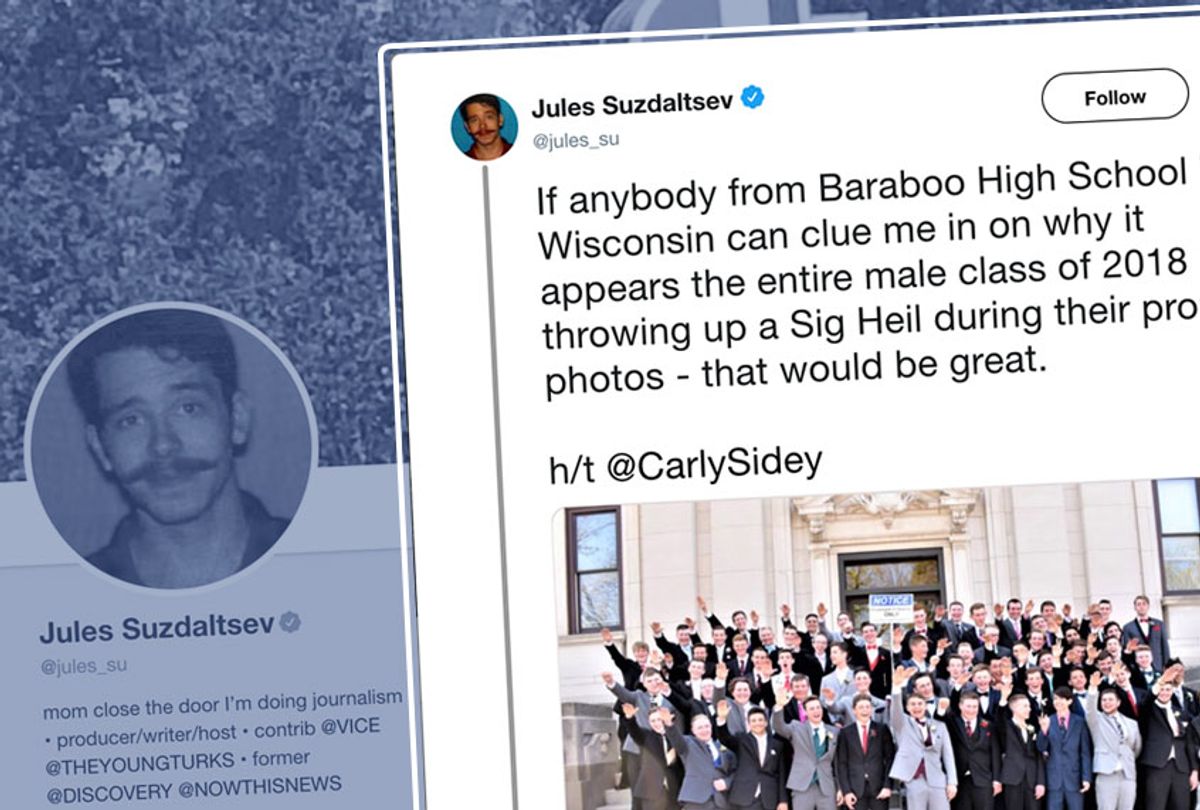 Prom is a rite of passage for millions of high school students every year. The suits, gowns and embellishing corsages make for memories that will last a lifetime, but a group of Wisconsin students may want to soon forget last year's prom.

Dozens of male high school students from Baraboo High School are under fire for giving Nazi salutes in their junior prom photos from last spring. The salute, formally called the Sieg Heil, was used by Nazi soldiers to signal obedience to Adolf Hitler. Now, it has shaken an entire school district and potentially cost the future of scores of high school boys.

The photo made waves on the Internet this weekend when a former student at the high school, Carly Sidley, excavated it from a private twitter account. ″This post has since been deleted, but i just want [Baraboo School District] to be aware of the disturbing actions that are represented in this photograph," the Baraboo graduate originally tweeted. "This is BEYOND sickening.”

The Baraboo School District released a formal statement early Monday morning to make it clear that the school had no involvement in the antisemitic photo.

"Early this morning, a photo that was taken last spring of some Baraboo School District students who appear to be making extremely inappropriate gestures began circulating on social media," superintendent Dr. Lori Mueller wrote in a statement. "With that, we want to be very clear: the Baraboo School District is a hate-free environment where all people, regardless of race, color, religion, creed, sex, sexual orientation, gender identity, national origin or ancestry, are respected and celebrated."

Dr. Mueller confirmed in the statement that the school district would be launching a formal investigation into the situation along with parents, staff and local authorities. The Baraboo Police Department confirmed this in a tweet earlier this morning.

In the wake of the firestorm of media attention the small Wisconsin town and high school has been receiving, a student in the photograph who did not give the Nazi salute came forward to reflect on the photo and cite his reasoning for not participating.

"My name is Jordan Blue, I am the boy captured in the photo to the far right," the student wrote in a statement. "The photo was taken during out Junior Prom Photos. I clearly am uncomfortable, with what was happening ... The photographer took the photos telling us to make the sign, I knew what my morals were and it was not to salute something I firmly didn't believe in."

Blue continued to detail the fraternal-like nature of his peers, claiming they had bullied him since middle school – something he continues to struggle with today. He writes that incidents like these were normal for the boys and always taken as a "joke" and questioned whether this time the school district will finally take action.

"These are the boys[sic] of Class of 2019, nothing has been done and my question is... Will[sic] anything ever be done?"

Democratic Sen. Jon Erpenbach, whose district includes Baraboo, told the Associated Press that he blames President Donald Trump for creating an atmosphere where such behavior is encouraged.

“There’s no room in the world for anything like that at all. From what they’re seeing out of the White House, that it’s OK to be intolerant and racist. Never is. Never was. Never will be,” Erpenbach said.

Wisconsin’s Democratic Gov.-elect Tony Evers said on Monday that the Nazi salute has “no place in Wisconsin.”