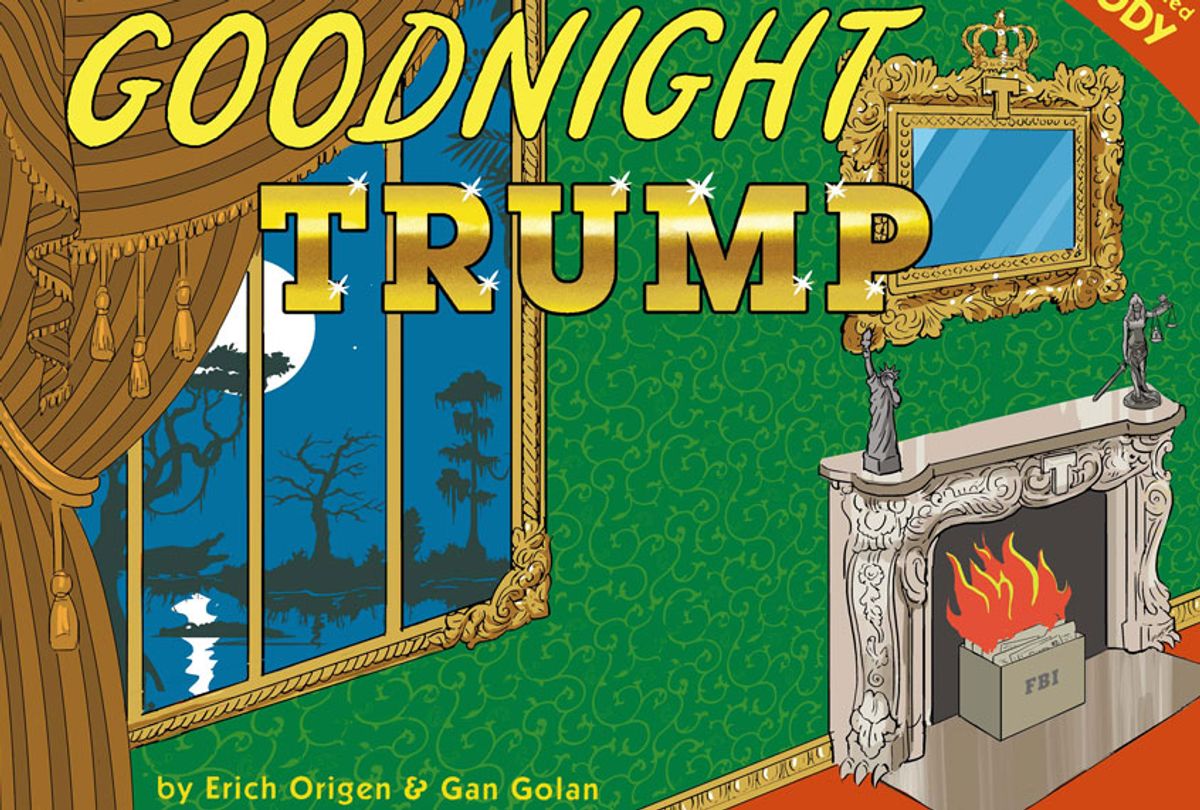 Most picture books are written for a double audience. Of course they're designed to appeal to children, who will hopefully enjoy them over and over and over, but they also have to capture the adult imagination. They who make the initial purchase are often the first to be won over by the book’s artwork, premise and story. The magical books that become classics, such as one that’s become an integral part of standard American bedtime rituals, “Goodnight Moon,” entrance both audiences equally.

No such dual enterprise need be put to work in the new parody “Goodnight Trump: A Parody,” however. Erich Origen and Gan Golan, who previously teamed up on the parody “Goodnight Bush,” have instead revamped Margaret Wise Brown’s peaceful, methodical bunny benediction set inside Clement Hurd’s great, green room into an incantation seemingly designed to hasten Donald Trump’s exile from the White House. (If you believe in impeachment, clap your hands!)

Published in 2008, “Goodnight Bush” offered its readers a moment of grave-dancing on the impending end of a two-term administration forever marked by endless war and a catastrophic economic recession. As favors for Election Night parties go, it got the job done handsomely, with its good-nights a mixture of the serious (“good night, old growth trees / good night, detainees”) and the weird (a seriously creepy “quiet Dick Cheney” in the rocking chair “whispering ‘hush’”). The relief is palpable with every page turn and repeated "goodnight": good night, at last, to all that — forever, let’s hope.

“Goodnight Trump,” coming not even two full years into Trump’s term, functions less as an exhalation and more like a spell to soothe the fried nerves of the frazzled left, something to flip through at 2 a.m. while the Ambien kicks in. Goodnights wished to the contents and inhabitants of “the very classy room,” — which range from the cheeky, with two “grabbable” kittens and “golden showers for the rich,” to the disturbing, namely “a pretty young bunny whom money has hushed” bound and gagged in the rocking chair and a doll huddled in a corner, “held in a cage” — form a litany of accusations against the president’s crimes against humanity and taste, juxtaposed for maximum horror and revulsion.

There are sick burns, too, though it’s not likely the president would receive them as such: “Goodnight heirloom Klan costume / Goodnight cowards kissing up to a buffoon” (the illustration of the “Banana Republicans” underwear smooched by McConnell, Ryan et al needs to be seen), the Nazi party symbol of an eagle perched atop a swastika woven into the room’s rug. And as far as the poetry goes, there’s an admirable ambition in pairing “very stable genius” with “drawer full of subpoenas” that I can get behind. My favorite panel in the original, the haunting “goodnight, nothing” is reimagined here as “goodnight, ‘the best people’” — same empty panel, different existential howl.

“Goodnight Trump” ends on a vision board-style victory note, a great green room in which the nightmare of the Trump administration is put to rest, and the room put back to right.

Some purists may take issue with these parodies and their intent, but it’s worth considering that the "great green room" was never just a little bunny’s bedchamber. I learned everything I know about “Goodnight Moon” from novelist Sena Jeter Naslund, whose lecture on the picture book is somewhat of a legend at Spalding University, where she founded the MFA in creative writing program. Naslund asked us to look at the room not as a random color but as a deliberate choice by the writer: “Now I ask you, what are the connotations of something that is great and green? And maybe a little bit blue, too, if you’re looking at outer space? We’re looking at the world, in a way. That is our enclosure.” If it feels a bit like sacrilege to take a masterpiece like "Goodnight Moon" and pervert it with Trumpian imagery, think of it as one symbolic attempt to restore the world — and with it objective truth, as the book's famous object permanence lessons suggest — back to order.

In a similar vein but with executed on a different level all around, the staff of “The Late Show with Stephen Colbert” got in on the satirical picture book game this month too with “Whose Boat Is This Boat?: Comments That Don’t Help in the Aftermath of a Hurricane.” Perhaps this foray into Resistance Picture Books was inspired by their peers over at “Last Week Tonight with John Oliver,” whose “A Day in the Life of Marlon Bundo,” a parody of Vice President Mike Pence’s daughter Charlotte’s clunky homage to her father, epically skewered the notorious anti-LGBT vice president by depicting the titular first bunny in a same-sex relationship.

“Whose Boat Is This Boat?” works off a lower concept, namely the oblivious and banal comments uttered by the president during a September visit to North Carolina in the wake of Hurricane Florence's destruction, which are reproduced here verbatim and paired with cartoon art of Trump pointing and shouting at a boat that washed up on the shore (true story) while residents and reporters look on in dismay. With prose that merely transcribes quotes from an inarticulate mind and illustrations that lack the subtle wit that could elevate the book from "OK, sure" to sublime, "Whose Boat Is This Boat?" is a bit of a letdown next to the full "Goodnight Trump" package. Even the typewriter font is horsey on the page. Overall this book seems determined not to try too hard, just like a Trump product would. It's not all together unsatisfying to see the president make himself look bad all by himself, but the haunting vacancy of his words and hollowness of his gestures almost demand a heightened artistic treatment. Still, "The Late Show" is directing its proceeds to hurricane relief, so you can feel good about buying it to satisfy your "ugh, this guy!" urge.

One works for self-soothing, the other for pointing and laughing; our inner children, hardened by the rock-throwing and name-calling on the desolate playground of the post-Obama era, will be served either way. It goes without saying, of course, that neither of these picture books should be given to actual kids, whose brutal capacity for imagining villainy beyond our most disturbing Beltway realities  should be left pure as long as possible.