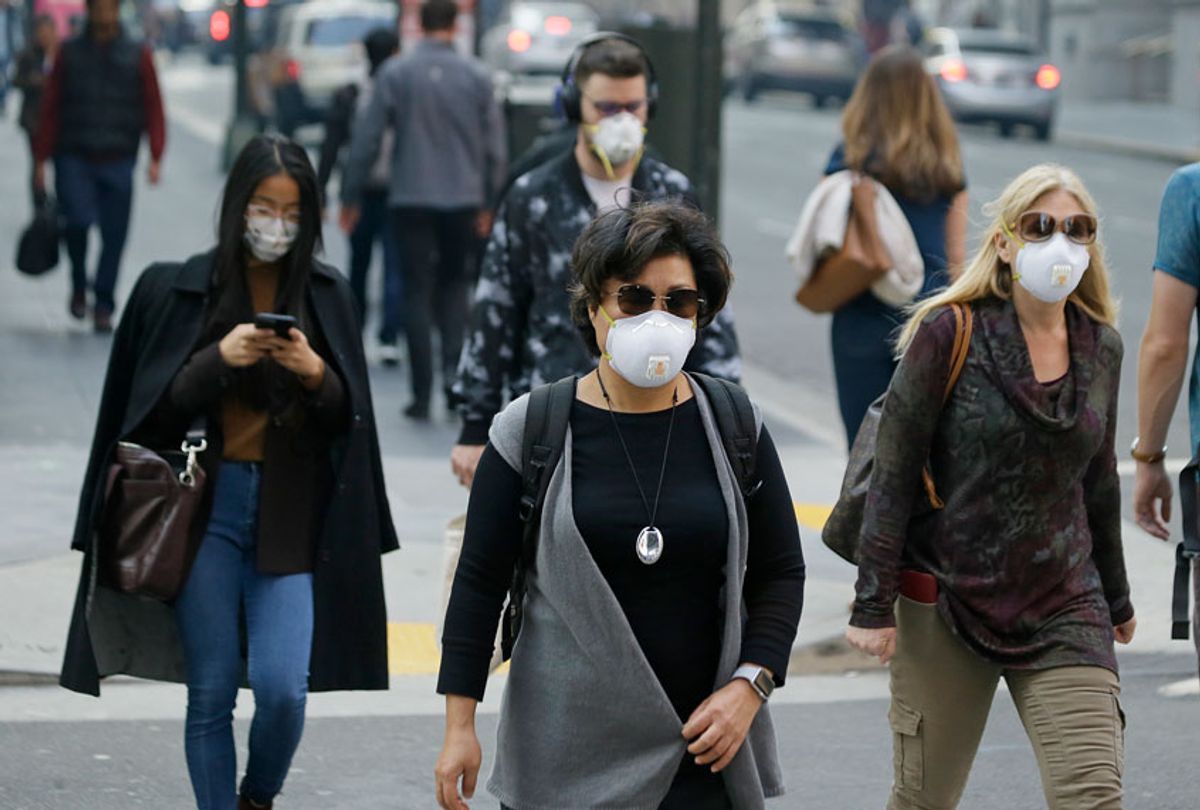 People wear masks while walking through the Financial District in the smoke-filled air Friday, Nov. 9, 2018, in San Francisco. (AP/Eric Risberg)
--

Last Thursday, many of the 7 million people living in the San Francisco Bay Area woke up to the bonfire-like smell of a forest fire. The smoke from the state’s deadliest fire traveled 160 miles south from Butte Country, where the “Camp Fire” started, and has hovered over the Bay Area since. Friday will mark the eighth consecutive day residents have been inhaling smoky air and living in a environment that appears eerily apocalyptic with no definitive end in sight.

Public health officials have warned residents about the short-term effects of being exposed to an unhealthy air caused by wildfire smoke. Children and older adults who are more vulnerable are told to stay inside, those with asthma and lung-related diseases can be more susceptible to attacks and death. Fortunately, Brent Andrew, the Chief Communications Officer of Zuckerberg San Francisco General Hospital and Trauma Center, tells Salon the warnings appear to be working, as there hasn’t been an uptick in respiratory and cardiovascular-related emergencies.

“We haven’t really had a significant uptick in respiratory complaints from patients,” he said. “We don’t have an unusually high number in emergencies... so far people are taking the advice to mask up and stay inside and not exert themselves.”

While this is good news, the long-term effects of exposure to this kind of dense smoke — a mix of burned matter from trees, grasses, houses and cars — remain unclear.

Balmes said it is possible to look to the effects of chronic exposure — for example, studying the health of those living in highly polluted cities like Beijing or New Delhi.

“We do know with chronic exposure there is increased heart and lung disease,” he said.

Part of the lack of the research on the topic is because the intensity and duration of wildfires are longer than they were decades ago.

“The length of time for exposure is generally not well studied because usually they don’t last that long,” Janice E. Nolen, the Assistant Vice President of National Policy at the American Lung Association tells Salon.

One study researchers can point to in contemplating long-term effects of wildfire smoke exposure is one in which researchers observed pregnant women residing in California’s South Coast Air Basin (SoCAB) during from 2001 to 2005. In October 2003, wildfires exposed people in Southern California to elevated levels of air pollution over several weeks. The study’s authors found a slightly lower birth weight in women who were pregnant during the wildfires.

“We do know that [for] women who are pregnant and exposed to wildfire smoke, it will put them at an increased risk for low birth weight of a baby,” Balmes told Salon.

Experts tell Salon the uncertainty around long-term exposure is mostly in part because the trend of these “smoke waves” is new — and that doesn’t mean it’s an anomaly.

According to a paper by researchers at Harvard and Yale universities, smoke waves “are likely to be longer, more intense, and more frequent under climate change, which raises health, ecological, and economic concerns.” A 57 percent increase in frequency, and a 31 percent increase in intensity, is predicted to occur by 2046 – 2051, affecting more than 82 million people when you factor in population growth.

“In the coming decades, we will be seeing the significant human health consequences from these extreme events in a changing climate,” Jia Coco Liu, and author of the paper, warned in a statement in 2016.

Doug Brugge, author of “Particles in the Air: The Deadliest Pollutant is One You Breathe Every Day,” tells Salon potential cognitive consequences should be considered, too. Research shows increased exposure to 2.5 micron particulate matter has been associated with accelerated cognitive decline in older adults.

While the smoke itself is a concern, the particulate matter that is part of the pollution is alarming too — both in the long-term and the short-term.

“Particulate matter pollution is produced by most types of combustion and can cause an increase in short-term health problems... the impacts can be both fatal and nonfatal both heart attacks and stroke and respiratory problems,” Brugge said.