Trump's crazy, crafty strategy: Discredit everybody until nobody believes anything anymore

Trump has admitted why he attacks the press — and why he appointed Matt Whitaker. Can he survive his own strategy? 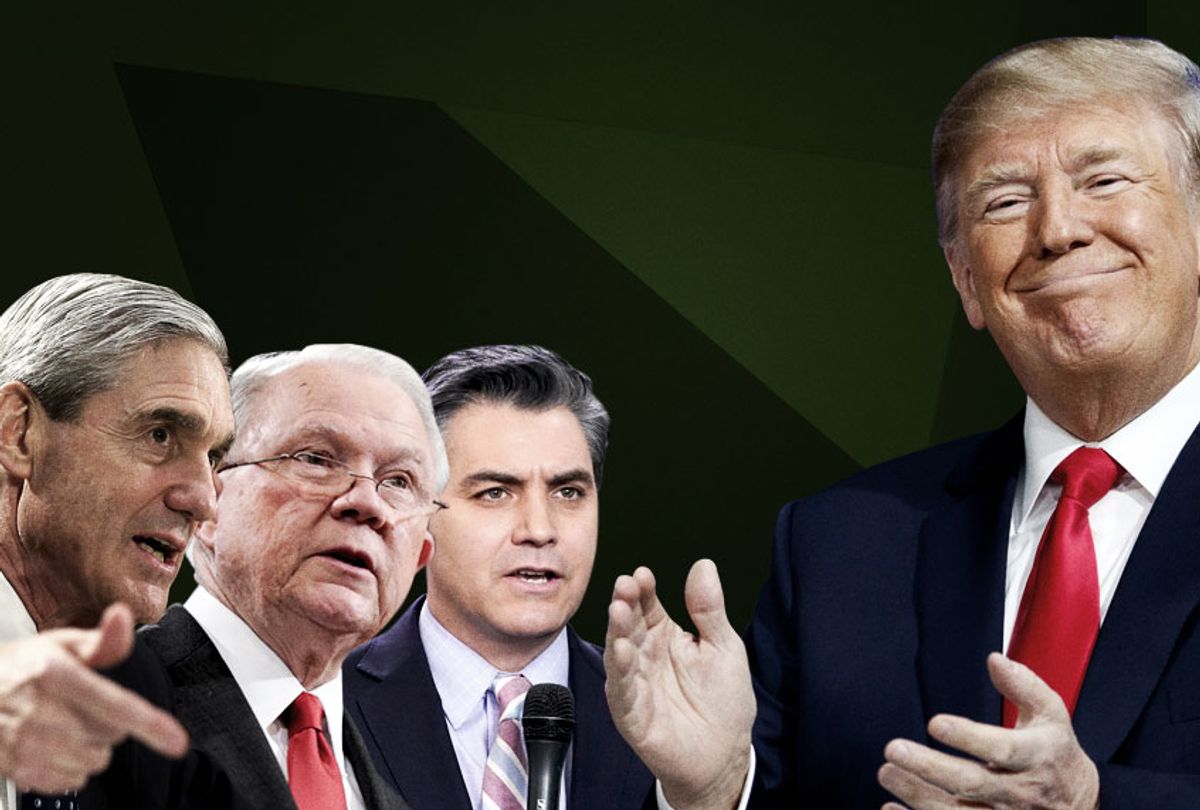 If there's one thing you might have thought Donald Trump has learned in the past two years it's that it was a huge mistake to go on TV with Lester Holt and admit that he was thinking about the Russia investigation when he decided to fire FBI Director James Comey. Recall that Trump was just rambling, in his stream-of-consciousness mode, when he just blurted it out without prompting. That revealing statement was not only what precipitated the appointment of Robert Mueller, it was also one of the most compelling pieces of evidence that Trump was trying to obstruct justice when he fired Comey -- an apparent confession of intent. Trump has said and done hundreds of stupid things during his tenure, but that one really stands out as the blunder of all blunders.

Oops, he did it again. This week, in the midst of what observers everywhere are characterizing as a meltdown, Trump gave an interview to the Daily Caller in which he was asked if he had come up with any names for the permanent attorney general appointment, and whether Chris Christie had come up. Trump replied that his acting AG, Matt Whitaker, is highly respected in the Department of Justice and that he got a "very good decision" affirming that Whitaker's appointment was legal. Then he said:

Nobody had mentioned Russia or the Mueller investigation. The question wasn't even about Whitaker. Just as he blurted out his intent when asked why he fired James Comey, he blurted out his intent when he was asked about the attorney general. He doesn't have the mental discipline not to reveal his motive for firing or hiring anyone when it comes to the Russia probe. If one didn't know better one would think he is subconsciously begging to be indicted for obstruction of justice.

In any other administration, Whitaker would never have been chosen because of the obvious appearance of bias. He spent months trashing the investigation and declaring the president innocent of all charges. Indeed, it's obvious that was the reason he was hired. At this point no one knows whether ethics advisers in the DOJ have been asked to weigh in on Whitaker's possible conflict of interest, in that he worked closely with Sam Clovis, a subject of the investigation. Even so, the consensus seems to be that Whitaker can simply refuse to recuse himself even advised that he should. After what happened with Sessions, Whitaker recusing himself is about as likely as Donald Trump shaving his head. For all we know, Whitaker has been read into the investigation and has already been on the horn with Trump, sharing all the details. That might very well explain Trump's thought process in that moment.

It would also explain why for the first time in weeks Trump fired off a volley of tweets about Mueller that are even more hysterical than usual:

Trump making these kinds of wild accusations is nothing new. What is new is the way he's now talking about the "inner workings" of the investigation. This raises suspicion that he's heard something from Whitaker, although it's certainly possible that he's hearing from people who were interviewed by the prosecutors or the grand jury. If so, he's once again raising suspicions that he's obstructing justice, this time by witness tampering. (Then again, maybe he just heard something from some mouthpiece on Fox News or is making it up out of thin air. He's doing that with increasing frequency these days.)

The mainstream media is overflowing with reports about chaos and pandemonium inside the White House. Theories abound about why his hysteria has escalated so precipitously. (I offered mine earlier his week -- he can't deal with losing and feels he's been betrayed by his own people.) Whatever it is, it's clear that he's cracking under the pressure.

However, it's not altogether true that this is purely an emotional reaction. Trump is not a good political strategist, as the recent election results attest. But that doesn't mean he doesn't have a survival strategy. He told a journalist what it was all the way back in 2016.

CBS News' Lesley Stahl shared an anecdote last spring about an interview at Trump Tower shortly after the election. She asked the president if he planned to continue bashing the media:

I said, "You know, that is getting tired, why are you doing this? You’re doing it over and over and it’s boring." He said, "You know why I do it? I do it to discredit you all and demean you all, so when you write negative stories about me no one will believe you."

I'd say he's been quite successful, at least with about 40 percent of the population. But he's not just doing that with the press.  He's demeaned the U.S. intelligence community, the Department of Justice and the Mueller investigation. He has also instilled distrust in the electoral system in ways that are absurd but plant the seeds for him to challenge the results if he loses, as he clearly planned to do in 2016.  His survival strategy is to discredit anyone he believes poses a threat to him, and thereby persuade his followers not to believe those people even if they show proof.

Right now he's facing the choice between pulling the plug on the Mueller investigation and dealing with the firestorm that he knows will follow, or letting it unfold and hoping that enough people become so convinced that the prosecutors are biased and untrustworthy that they will react to Mueller as the public reacted to Ken Starr's report in 1998. (Senate Majority Leader Mitch McConnell suggested that was possible last week, concern-trolling the Democrats about engaging in "presidential harassment.")

Trump is escalating his attacks on Mueller and the DOJ because he believes that is how he will get out of this mess. After all, Bill Clinton survived the Starr investigation -- and an actual impeachment trial -- just fine. Unfortunately for Trump, all the recent opinion polls show Mueller with over 50 percent approval, while Ken Starr never had more than 28 percent. Clinton had a 60 percent approval rating on the day he was impeached -- Trump remains mired in the low 40s.

Trump doesn't seem to realize that there's a flaw in his strategy: It doesn't work if the person who attempts to discredit others so that no one will believe them flagrantly discredits himself in the process.