Ocasio-Cortez's call for more progressives to run is being treated like a threat to Democrats. It's anything but 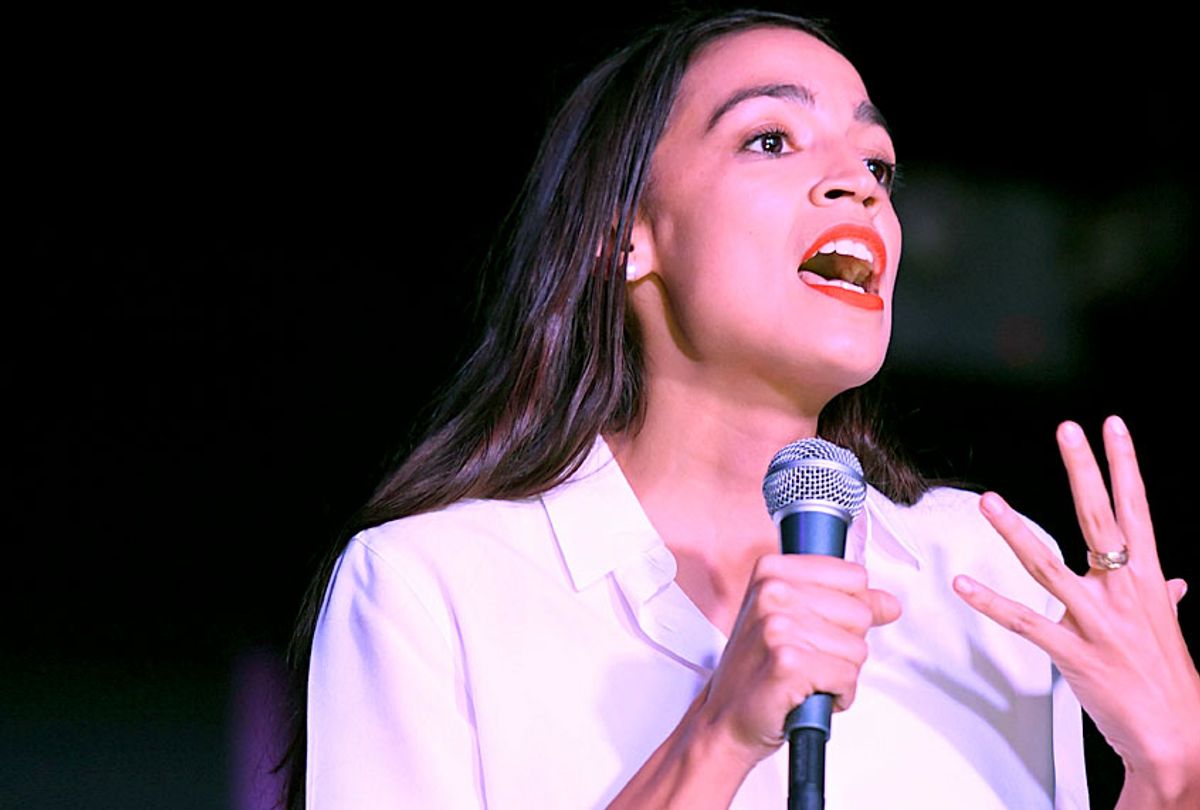 The media's endless hunger for intra-Democratic conflict and a continued rehashing of the 2016 primary campaign strikes again. Over the weekend, news websites breathlessly promised high drama and a major clash between newly-elected New York congresswoman Alexandria Ocasio-Cortez and the allegedly stodgy and frightened Democratic establishment.

"Alexandria Ocasio-Cortez and Rashida Tlaib Aren't Finished Challenging Incumbent Democrats Who Come Up Short," screamed a headline at The Intercept.

The story is fairly simple: Ocasio-Cortez joined a call with a group called Justice Democrats Saturday night and encouraged progressive Democrats to run for office and to not shy away from primary challenges against incumbents.

“We all need to run at all levels of government, but I really hope that many of you join me here in Congress," Ocasio-Cortez said on the call. "All I’m asking you to do is throw your hat in the ring, say what the heck."

This was backed up by Tlaib, another newly-elected House member (from Michigan) putting out a press release asking supporters: "Help uplift women like us at all levels of government."

Despite this unassuming rhetoric, this call was framed as a major threat to the Democratic establishment. Daniel Marans at the Huffington Post wrote that "Ocasio-Cortez demonstrated she has little interest in adhering to traditional congressional norms of comity and deference." Aída Chávez and Ryan Grim of the Intercept write that this move settles the question of whether Ocasio-Cortez "will continue the practice of endorsing primary challenges to sitting members of Congress, or whether she will work to ingratiate herself with the institution she’ll be joining."

It's an exciting David and Goliath story, of young upstart progressives taking on the Democratic establishment. The evidence that there is widespread Democratic establishment antipathy to this candidate recruitment scheme, however, is sadly lacking. Huffington Post, the Intercept and the Daily Beast, which ran a similar story, had no quotes from Democratic politicians or staffers seeking to discourage primary challengers.

And while Indivisible's Leah Greenberg went a little viral with a tweet saying, "the idea that that Democrats, once elected, should never have to worry about a primary challenge is actually *vastly* more radical than the idea that primaries are good and healthy," it's unclear who exactly is arguing against primary challenges, other than some low follower-count Democratic voters on the Twitter.

To be sure, individual politicians are human beings, and tend to get grumpy when they're being challenged. This goes both ways, however, with supporters of both the incumbent and the challenger lobbing insults and snark at each other when things get heated. Antagonism is a natural result of competition, and can't be ascribed solely or even mostly to incumbents feeling entitled to run without challenge.

Competitive primaries are, in fact, good and healthy. That's doubly so in the era when the Republican Party has abandoned running on policy ideas in favor of racist trolling, leaving Democratic primaries the only space left in electoral politics for meaningful policy discourse. For solidly blue districts like the one in New York City that elected Ocasio-Cortez, Democratic primaries are the only place where voters can exercise meaningful choice.

More to the point, while this move to recruit new candidates is being framed as a threat to the Democratic Party, it's actually a huge benefit. If the effort recruits young, exciting candidates, and that leads to the candidates connecting with people who previously had little or no involvement in electoral politics, that's a huge win for the party. If primaries get attention, the party gets attention. This can only increase engagement in the long run.

Once people start knocking doors, giving money or phone banking, they tend to stay involved in party politics — and that investment will help the party in the long run. Getting people who don't often vote to show up in a particular primary election will likely lead those people to vote in more elections overall. Competitive primaries could help bring more voters on board and lead them to stay in the fold, which is a positive thing no matter who wins any individual contest.

Because of this, there's reason to be skeptical of suggestions that the Democratic establishment rejects the very idea of primary challengers. Yes, established incumbents are more likely to get support from PACs and unions and other big players in the Democratic organizing world. No one is denying that having a couple of wins in your pocket attracts people who are eager to bet on your future success. But that shouldn't be confused with an outright rejection of the concept of competitive primaries, any more than a baseball team that buys up a bunch of good players rejects the idea of putting those teams on the field.

(It's certainly true that in some states, and most notably in New York, elected Democrats have engaged in tactics to protect themselves against primary challenges. That's deplorable and it needs to end. But it's also an artifact of the systems of power in those individual states. I don't think it can be extrapolated to say anything meaningful about all Democratic incumbents.)

Ideally, we would have more competitive primaries so people can bring a multitude of ideas to the table to be hashed out based on their actual content. Unfortunately, the media narrative reducing this to a pitched battle between the Socialist Hippies and the Centrist Grinches has the opposite effect. It encourages people to pick a team and mindlessly root for them, instead of actually engaging the ideas on the table — ideas that often don't match up to the "team" that any politician has been assigned to based on factors like incumbency, aesthetics or affect.

It's time to let the 2016 primary go. It's long past time. This story isn't about David vs. Goliath or some dualist struggle between two factions who supposedly have no overlap. It's a mishmash of different people in different districts with different ideas, trying different tactics with varying levels of success. Certainly, there should be more candidate recruitment and more primary challenges, but not because of some half-baked narrative about an epic struggle for the soul of the party. It should be about putting policy ideas and advocacy back at the center of party politics, in hopes of making real progress in the future.