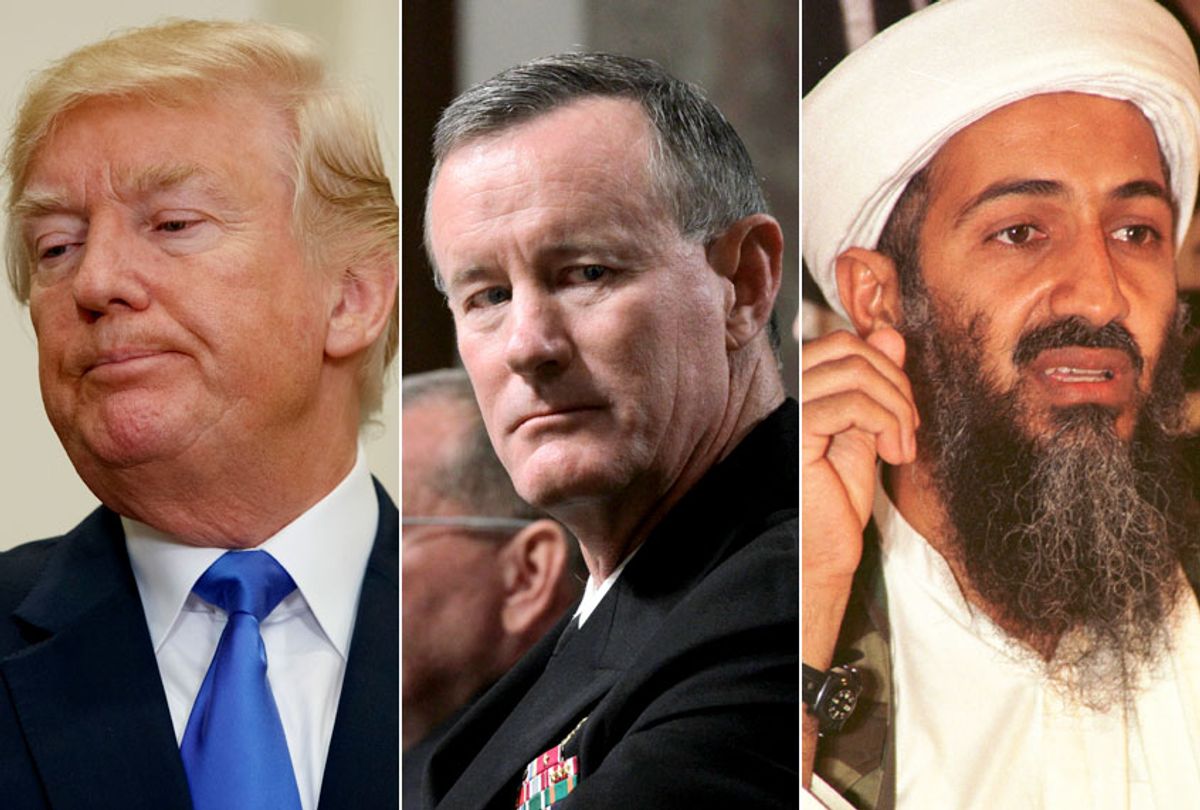 Even after he picked a fight with a decorated military veteran one week after skipping out on two separate events honoring America's fallen heroes, the Republican Party is still following Donald Trump off of the ledge. In the wake of a growing feud between President Trump and members of the team behind the death of Osama bin Laden, the Republican Party made clear where their loyalties lie in a Monday afternoon tweet.

In a controversial interview with Fox News on Sunday, Trump took jabs at the Pakistani government and retired Navy Admiral William H. McRaven's efforts to capture Osama bin Laden. Sitting down with Fox News' Chris Wallace last night, Trump claimed that McRaven was a "Hillary Clinton fan" and an "Obama-backer" after Wallace brought up McRaven's previous comment that Trump was "the greatest threat to democracy in [his] lifetime." While reports circulated around the time of Clinton's presidential campaign announcement that McRaven would be her Vice President, he dismissed the allegations as rumors back in 2014.

Still, the GOP's official Twitter took a jab at McRaven for his left-leaning politics in an attempt to defend the commander-in-chief:

A firestorm soon erupted on Twitter between the Republican Party, President Trump and former U.S. Navy SEAL Robert J. O'Neill, the man who fired the fatal shots that killed the mastermind behind the Sept. 11 attacks.

O'Neill tweeted his support for McRaven, claiming that the capture and murder of bin Laden was not a result of politics from the right or the left, but rather a bipartisan mission for all Americans.

Hours after the Fox News special aired last night, McRaven came forward in defense of his previous statement about Trump in an interview with CNN.

"I stand by my comment that the President's attack on the media is the greatest threat to our democracy in my lifetime," McRaven told CNN. "When you undermine the people's right to a free press and freedom of speech and expression, then you threaten the Constitution and all for which it stands."

He continued by denying his support for any one specific party, citing that he supports all presidents.

"I did not back Hillary Clinton or anyone else," McRaven said. "I am a fan of President Obama and President George W. Bush, both of whom I worked for. I admire all presidents, regardless of their political party, who uphold the dignity of the office and who use that office to bring the nation together in challenging times."