If it sounds too good to be true, take a closer look beyond the buzzwords 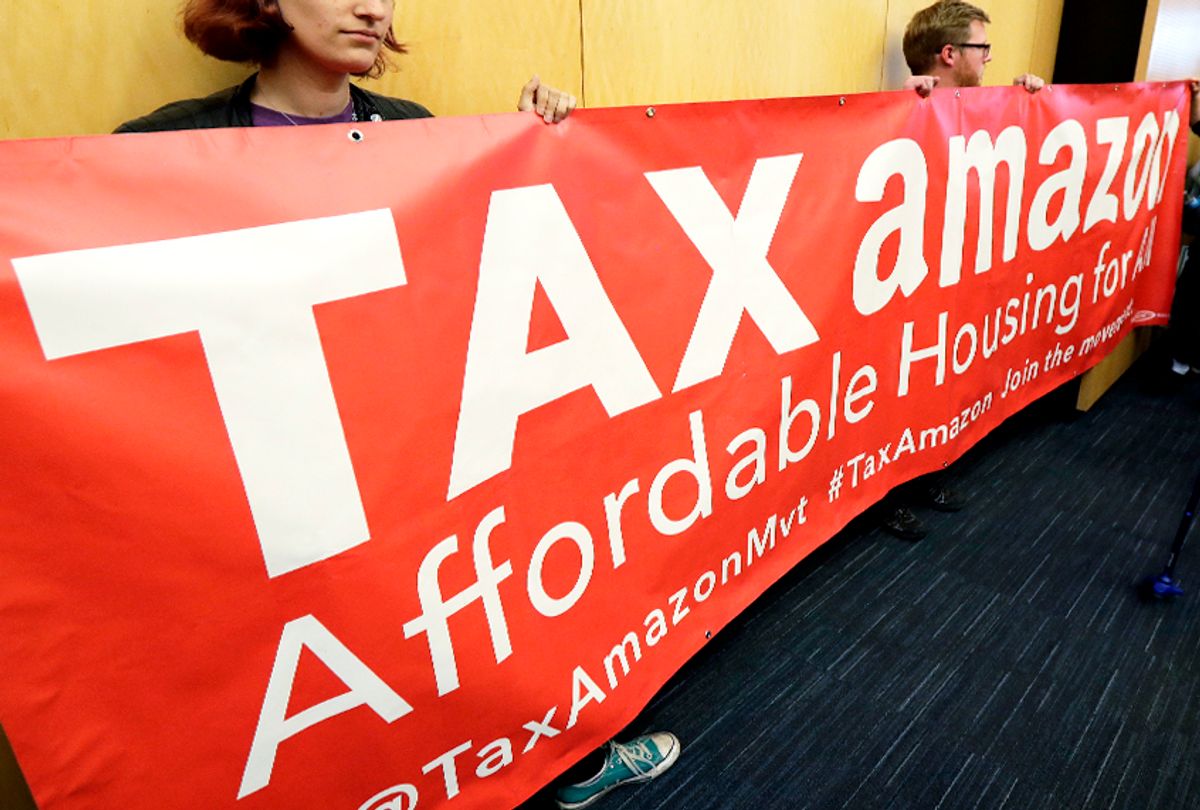 Demonstrators opposing the repeal of a tax on large companies such as Amazon and Starbucks in Seattle. (AP/Ted S. Warren)
--

There are so many plans these days to “transform” an area via a “public-private partnership” that will “restore” and “fix” the local economy and lead to an economic “recovery” for the “brave” group of “stakeholders” who’ve come together to make it happen. The business leader drumming up support is often a “good friend” of the politicians in charge. To entertain another plan, the people in power warn, will “hurt” the economy.

Have you heard that story in your own backyard recently?

It’s a story that might as well be contemporary Shakespeare, except it could be written by the auto-correct text on a developer’s iPhone.

It is a story told repeatedly, with different players: It’s the tale of Little Caesar’s Arena in Detroit. It’s the story of the big box stores including Wal-Mart and Home Depot. And it’s the story of Amazon’s HQ2.

No matter the project, the end result is the corporation pays little to no tax, and gives little to nothing to the community — not even the promised jobs. It is guaranteed to extract everything from captured tax dollars to fire and police resources, also paid for with tax dollars. It will likely capture education dollars and even take away employment from locals as small businesses close, and then it leaves the taxpayer with the clean-up bill. Empty, toxic real estate and a growing lower class are left behind.

In other words, these “transformational” projects drive locals into worse-off conditions while lining the pockets of the already wealthy.

It’s a tale as old as capitalism itself, and it’s being told over and over again with different players but using the same popular words.

Here are the economic development words to watch out for, and what they really mean.

Meaning: A massive tax dollar giveaway to a private company at taxpayer expense.

Taxpayers lose money on everything from schools to fire departments. Taxpayers end up footing the bill for the private company’s land, clean-up, and more. Taxpayers receive comparatively nothing in return.

Instead, communities are healthier and more sustainable when they are more economically vibrant and diverse with co-ops, small businesses, and collectives.

Meaning: We’ve destroyed something irreplaceable — a neighborhood, wetlands, a forest — and see a way to make even more money on what’s been destroyed.

This happens over and over again — it’s one of the cycles of capitalism. The truth is once the neighborhood is gone and its inhabitants displaced — once the habitat that took 1,000 years to create is destroyed — it cannot be restored. You cannot restore Detroit’s vibrant African American neighborhood of Black Bottom by putting in a B.B. King supper club any more than you can restore wetlands that took thousands of years to establish and flourish. What you’re doing is making money on destruction—not restoration.

Preservation is more powerful than the destroy-restore cycle.

Meaning: A favorite phrase thrown around in the Democratic Party and political circles nationwide; when someone says they are a “good friend,” what they really mean is they are stabbing that person or group in the back.

Be wary whenever someone tells you—especially in politics or development—that someone else important is a “good friend.”

Be honest about who people are, and listen for honesty when someone is trying to sell your community a development.

Meaning: The modern-day equivalent of a dog-and-pony show, “stakeholders” is regularly used as a catch-all phrase by those who want to appear inclusive and cover their own asses.

The chosen “stakeholders” are often those with strong social media followings and the local LGBTQIA/POC community members likely to be the most friendlyto the development plan. They are often offered a seat at the table because they are often those who are least likely to rock the boat. Pictures will be taken, Instagram posts made, tweets sent—inclusion looks like it feels so good.

Such stakeholder meetings are often exclusionary of those most marginalized, disenfranchised, and impacted by development plans.

Meaning: This one can be used for a “stakeholder” folding for the developer, or for a developer going into a depressed community.

It’s also used for a long list of virtue signaling. Brave used to be a word reserved for firemen running into burning buildings to save children and pets; self-sacrificing soldiers saving their brothers-in-arms and helpless civilians; non-violent protesters standing strong in the face of weapons, violence, and hate.

Bravery is not a self-righteous action — and definitely not meant for those selling out their community to a developer, or for a developer taking tax dollars to develop a community.

Meaning: Something is broken beyond repair — for example, the vast majority of public school systems. But there is a new way to make money on the broken-beyond-repair things by “fixing” them: For-profit charter schools and intensive testing, done by private corporations with state or local school system contracts paid for with tax dollars — all of which tend to break the system even more.

Developing new and locally tailored solutions to a broken system is possible — but it can mean leaving behind the broken system entirely.

“We can’t do that; it’ll hurt the economy,” warns almost every politician when faced with an economically sound solutionto ecological crises our society and planetare facing.

Meaning:What they mean is, it’ll hurt their own investments, their own power, and their own bottom line.

The fact is, few things hurt the economy and our environment more than the public-private partnerships, their schemes and scams, and development dealsthat let events like the Flint Water Crisiscontinue.

When someone says, “We can’t do that; it’ll hurt the economy,” ask yourself whose pocketbook it will really hurt, and chances are it’s not yours — it’s the people in power.

As George Carlin used to say, “America’s leading industry is still the manufacture, distribution, packaging and marketing of bullshit. High-quality bullshit; world-class, designer bullshit, to be sure.” These words of decades ago are still used, and they are still bullshit, just like these seven phrases are today.