Clinton was defeated under a fake, sexist email "scandal," but Ivanka Trump just plays dumb and skates by 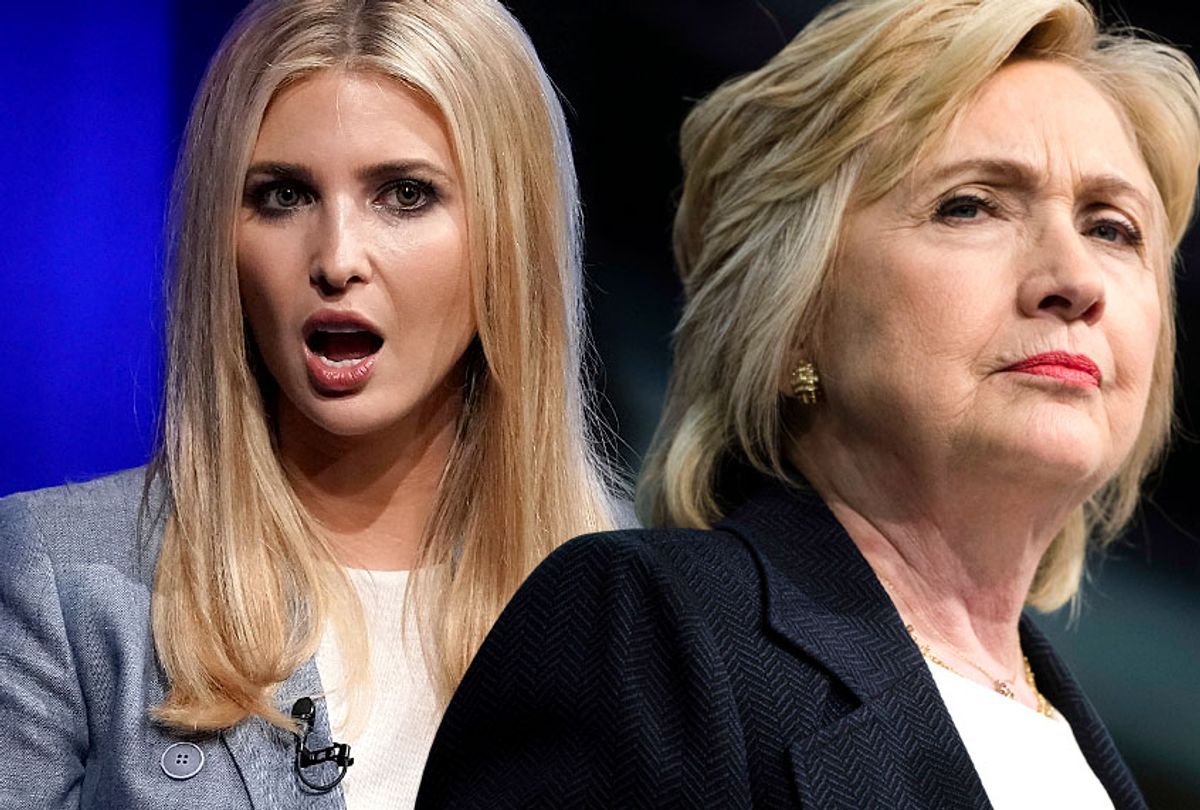 The daily hypocrisies of Donald Trump, his family and his administration have piled up so fast that political observers, and journalists in particular, are going a bit numb. There have even been calls from some corners for an end to the harping on Trump's endless hypocrisies, on the grounds that everyone already knows the man has no political convictions, outside of racism, and shifts his opinions based strictly on what he thinks will gain him advantage in the moment. (This argument highly overrates how closely ordinary Americans are paying attention. The repetition that drives political insiders mad with boredom is often the bare minimum needed to get a story to sink in with average voters.)

But there's something that's a little more sticky about the story, reported by the Washington Post on Monday night, about Ivanka Trump breaking federal records rules by using her private email account to conduct government business. This bit of hypocrisy is catching a little more wind than most daily accounts of Trump or his staff flipping around and doing exactly the sort of things they railed against on the campaign trail.

Part of the issue here is that this particular Trumpian hypocrisy is so egregious. Trump heavily campaigned on the idea that Hillary Clinton had done something criminal with her emails, leading to the infamous "Lock her up!" chant at his rallies. He was given a massive assist by the mainstream media, always eager to bend over backwards to disprove Republican accusations of liberal bias, which hyped an unimportant story about Clinton's use of a private email account and also breathlessly covered the release of hacked emails from Democratic officials that revealed pasta recipes and dinner plans, but nothing of genuine importance.

These combined stories instilled in the public's imagination this idea that there was some criminal scandal involving Clinton and "emails," though most voters (for good reason) were unclear on what that scandal actually was. Mind you, Clinton was cleared of any crimes and the Democrats who were hacked were actually the victims of a crime. But the cable news-addled Trump harped on the issue constantly and sailed into office at least in part because of this invented scandal.

Now his own beloved daughter is doing the same thing Clinton was accused of doing. What makes so many liberals furious is that this offers another reminder of how insignificant the Clinton email story was, and also that Trump and the media always knew it was insignificant, but blew it up into a massive scandal anyway.

But I think the Ivanka email story isn't just about that. There's a gender angle at work here as well. As Robert Reich pointed out on Twitter, there's a long list of male Trump officials — who hold their current positions only because of the nonsensical Clinton email story — doing exactly what Clinton was relentlessly hounded for doing, which is using a private email account for government business.

In fact, what Trump himself has done is exponentially more of a threat to national security than what Ivanka Trump or Clinton ever did. In October, the New York Times reported that Trump has refused to relinquish his private cell phone as president. Even though he's been repeatedly told that Chinese and Russian spies are listening in, he still calls his friends to dump all sorts of information, some of it no doubt secret or even classified, thanks to his well-documented and incurable case of verbal diarrhea. But while many journalists who had hyped the Clinton email story admitted that what Trump was a far greater threat than anything Hillary Clinton had ever done, stories about Trump's phone didn't get even a fraction of a fraction of the hype that the Clinton email story got. Odds are it won't even get as much attention as the current Ivanka email story is getting.

That's because the Clinton email story, at its core, was about gender. It played into lingering stereotypes that women are untrustworthy, particularly when it comes to supposedly manly issues like national security. In fact, the email scandal was rooted in another fake scandal created by Republicans, the endless Benghazi investigations, which mainly functioned to give conservatives safe place to express their barely sublimated fears about women's incapacity to handle security issues.

That's likely why Trump's hypocrisy around his own daughter has an emotional resonance that the story about his personal cell phone hypocrisy does not. When Trump harped on the email story and his crowds chanted "Lock her up!", it was a way to ventilate anger and suspicion towards women who believe themselves capable of handling national security issues, as Clinton did by serving as secretary of state.

But Ivanka Trump is willing to play to sexist stereotypes about women's incompetence in a way that Clinton wasn't, at least if it's advantageous to do so. When confronted about the email issue by Washington Post reporters, Trump's spokesperson portrayed her as an innocent child who simply didn't know better, even though she had witnessed her father opportunistically carrying on about Clinton and emails on the campaign trail.

This response "exemplifies the doe-in-the-headlights demeanor she often exhibits when the expectations of her political know-how and skill become too high," Emily Stewart at Vox argues, pointing out that Ivanka Trump will act naive every time she gets caught with her hand in the cookie jar.

As Jill Filipovic pointed out in the New York Times, three of the journalists most responsible for keeping the Clinton emails non-story alive for months during the 2016 campaign — Matt Lauer, Charlie Rose and Mark Halperin — has since been damaged by accusations of sexual harassment and contempt for women in general. The passage of time has made clear that so much of what infuriated these men about Clinton was her unwillingness to do what Ivanka Trump does -- play-act naïveté and childish foolishness in order to soothe the easily bruised egos of men who need women to be dumb so they can feel smart.

Ultimately, that's why the Ivanka Trump story is so infuriating, especially to feminists. It's a reminder how much our political press is still shaped not by substance, but by stereotypes, and by policing those who defy them. So the Trumps, who know how to play up gender stereotypes, continue to get away with everything while Hillary Clinton, whose only crime was defying restrictive gender roles, was treated like a nefarious mastermind who needed to be locked up.