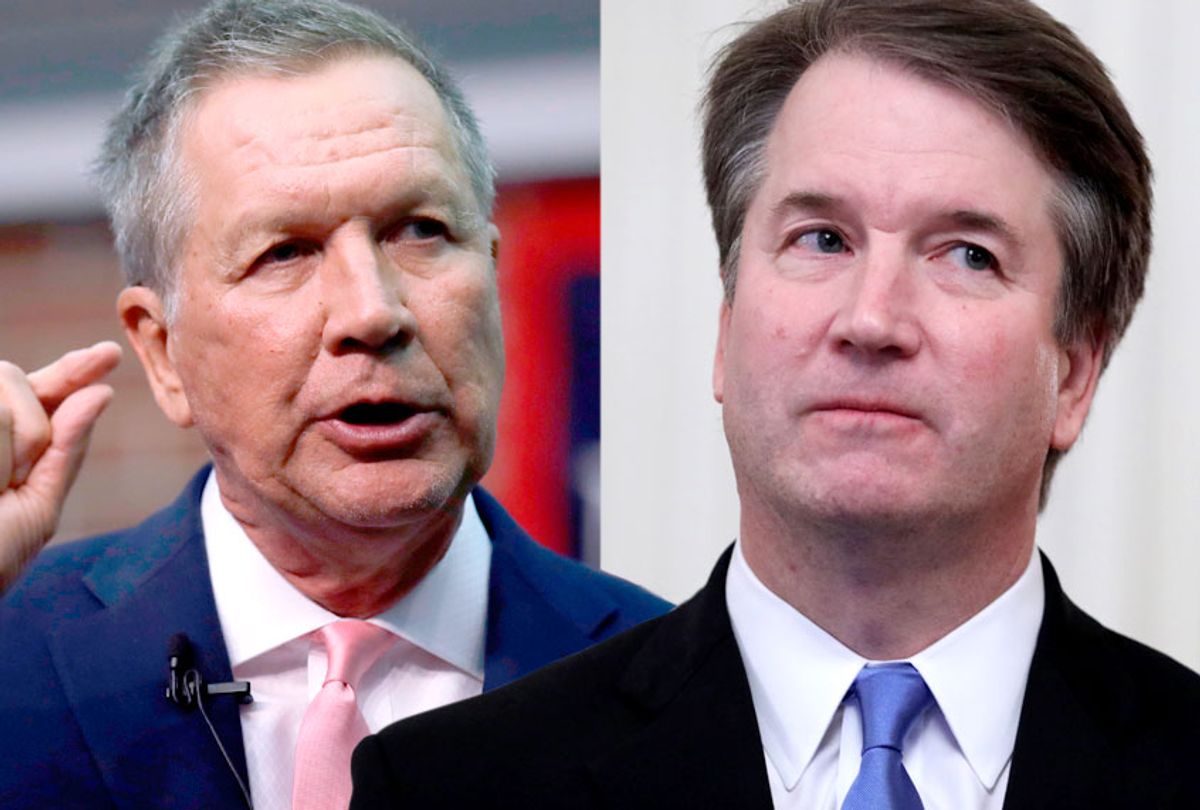 While the name of Brett Kavanaugh has fallen out of the headline news cycle, the religious right has not forgotten that his recent addition to the Supreme Court now means they likely have five votes to overturn Roe v. Wade and allow states to ban abortion. While the endless churn of outrageous Trump stories occupies national headlines, anti-choice activists and politicians are swiftly moving to pass laws that they clearly hope will lead, perhaps within a year, to vacating the current legal protections for abortion rights.

In the stampede to ban abortion, Republican politicians don't always bother to keep up the pretense that their opposition to abortion is about "life." All to often, they let slip how much it's rooted in contempt for women having control over their own bodies and their own futures.

Last week, the Ohio state house passed a bill that would ban abortions at six weeks. That would effectively a ban on most abortions, since performing the procedure before a pregnancy shows up on an ultrasound, which happens at just about six weeks, is not medically recommended. During debate over the bill in the Ohio state house, Republican state Rep. Christina Hagan brought her infant twins onto the floor to shame women who aren't mothers about their alleged selfishness.

"Motherhood isn't easy but it's necessary," Hagan dramatically declared when arguing for her bill to make motherhood mandatory.

Perhaps we should be grateful to Hagan for using her floor time to unsubtly suggest that women who have abortions are lazy and selfish. There should be no doubt that this is the belief that motivates the anti-choice movement in general, but most abortion foes have become media savvy enough to realize that they get more sympathy if they ascribe views to a religious delusion that equates embryonic life to that of actual babies. So at least Hagan showed her true colors, revealing the resentment of childless women and desire to exert control over other people's lives that lies at the center of the anti-choice movement.

Still, this rhetoric is enraging on a couple of levels. First, there's the deep sexism of assuming that a childless woman has nothing to offer society, that our value is only in the womb and not in the brain and the heart.

Furthermore, Hagan's insinuation — that forced childbirth is needed to ensure the continuation of the human race — simply doesn't reflect reality. The majority — nearly 60 percent — of women who seek abortions are mothers already. Among the rest, plenty plan to have children in the future, but are waiting for stability in both their economic and romantic life — because that's best for the child. Women have abortions because they take motherhood seriously and believe that it's better for children to be raised in homes that are ready to accept them.

That, in turn, should explain why, after passing this already egregious abortion ban, the Ohio legislature is now considering an even more draconian bill that would reclassify fertilized eggs, embryos and fetuses as "persons" in the criminal code.

This bill received a lot of national attention, because headlines emphasized that it could make performing or getting an abortion a capital offense. That's alarming, absolutely, but it barely touches the surface of how troubling this bill actually is. It could very likely criminalize more than abortion, putting women in danger of prosecution if they have a miscarriage, or even use birth control.

The six-week abortion ban is enough to end abortions in Ohio, if that's all the Ohio Republicans wanted. This bill, on the other hand, would go much further. By designating an embryo or a fetus a person, the state could open the door to charging women for child abuse or manslaughter if authorities believe their personal choices — ranging from using drugs to eating soft cheeses — were to blame for miscarriage or poor birth outcomes.

To understand the full scope of how awful this bill is, note that it defines as "persons" entities that are undetectable by either the woman herself or by any medical instruments. It takes a number of days for a fertilized egg, which this bill would declare a "person," to attach to the uterine lining and start the process of pregnancy. About half of all fertilized eggs fail to attach, and the woman then experiences a normal period with no way to know the difference. This bill would render every menstrual period, at least for women who have sex with men, into a legally ambiguous area, where she may or may not have a "corpse" of a "person" in her tampon.

It's no mysterious why anti-choice activists think creating this troubling legal ambiguity is a great idea. For years, the movement has been spreading pseudo-science about female-controlled birth control methods, such as the pill or the IUD, claiming that they kill fertilized eggs. (In reality, they work primarily by preventing fertilization to begin with.) This pseudo-science gives anti-choice activists an excuse to claim that female-controlled contraception is a form of "abortion" — as Kavanaugh did during his confirmation hearing — and thereby lay the groundwork to restrict contraception access.

Tendering every period a woman has as a maybe-person admittedly creates such an enormous legal gray area that it's unlikely even Republicans want to go there. But that's why there's no downside for anti-choice politicians in introducing this bill. It makes the six-week ban look "moderate" in comparison. It's unlikely that the birth control pill will ever legally be considered "murder," but anti-choice activists are using the claim that it kills fertilized eggs as a pretext for cutting off government and insurance funding for contraception. The appointment of Scott Lloyd, a lawyer who has worked to allow pharmacists to deny contraception prescriptions to women, to work at the Center for Faith and Opportunity Initiatives in the Department of Health and Human Services suggests that this new office, created in May, department, exists mostly to create bureaucratic obstacles for women seeking contraception.

In Mississippi, a ban on abortion after 15 weeks was struck down by a district court judge, who pointed out that multiple court decisions, including at least three from the Supreme Court, have upheld that states "may not ban abortions prior to viability." Because of decisions like this, it's believed that Ohio Gov. John Kasich will veto the six-week ban, rather than commit state resources to defending it through the lengthy appeals process as lower federal courts strike it down.

Still, if Mississippi chooses to fight that, and if that leads to a real chance to overturn Roe v. Wade before the Supreme Court, there's no telling how aggressive Republicans might become. Abortion bans that once seemed blatantly unconstitutional now have a real shot at being upheld. It's likely just a matter of time before there's a showdown in the Supreme Court over whether or not abortion rights in the United States will stand.