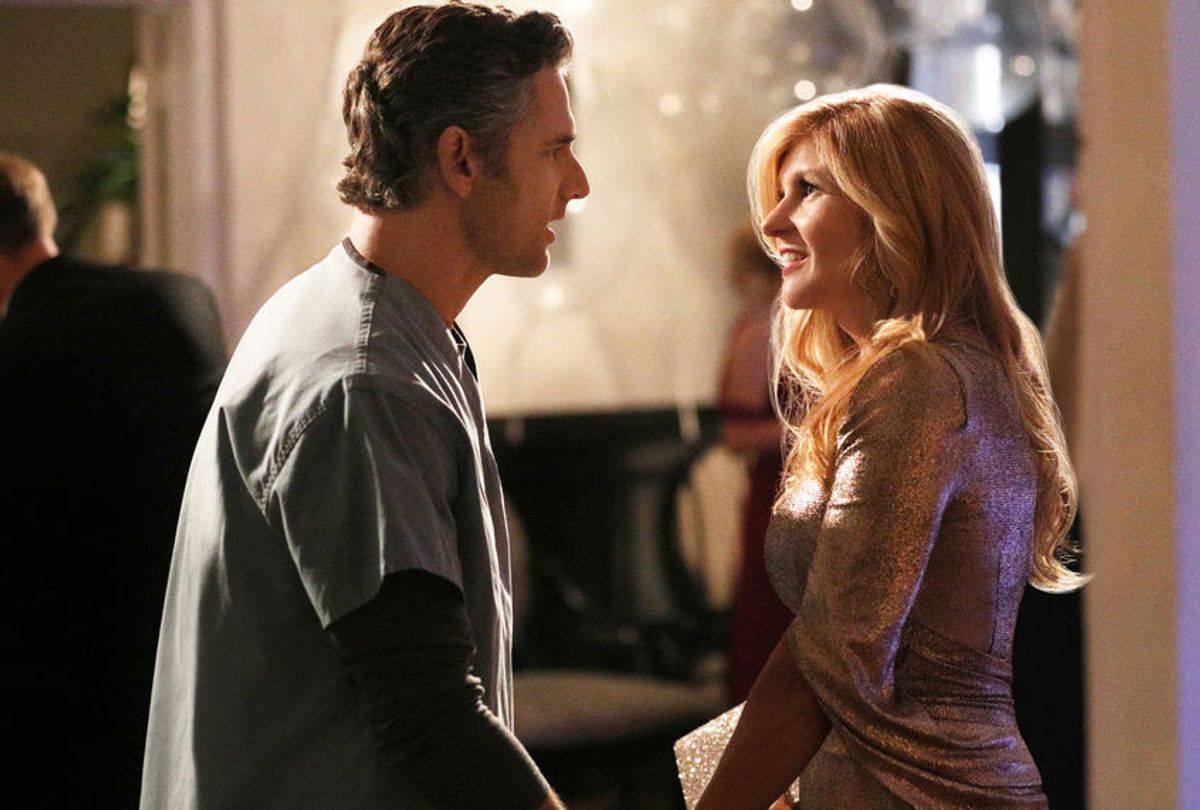 “Dirty John,” as in Los Angeles Times reporter Christopher Goffard’s addictive investigative series, or the hit podcast that came in its wake, or Bravo’s limited series debuting Sunday at 10 p.m., is a woman-in-peril story on steroids. It was born that way, a crime story with tendrils reaching many years into the past and revealing victims John Meehan ensnared long before he landed Debra Newell, a successful Newport Beach business woman with little in the way of fortune in the arena of romance.

Goffard’s pieces and the podcast, both released last October to great acclaim, are fascinating object lessons in how anyone can fall prey to the right con. It's a simple flaw inherent to humanity: regardless of how smart and level-headed we imagine ourselves to be, there are predators who can swim across all moats and charm the crocodiles into letting him pass.

Those who read or listened to “Dirty John” might have viewed Newell as an easier mark given her quest to find true love, a path that strolled through multiple failed marriages before she was swept off her feet by Meehan, who claimed to be an anesthesiologist and an Iraq War veteran who worked with Doctors Without Borders. When he showed up for their first date in shabby clothes, Newell wrote off his appearance to his business schedule and down-to-Earth attitude.

And in the series, John, played by Eric Bana, is handsome and attentive in his conversation. He does so many of the right things on the first date, save for a couple of massive red flags, that Debra, portrayed by Connie Britton, forgives missteps and chooses to focus on his demonstrations of chivalry. Her materialistic, brutally honest daughter Veronica (Juno Temple), on the other hand, can't overlook how ravenously John eyes all the nice things in Debra's home.

Next thing Debra knows she’s exchanging vows with him in a Las Vegas chapel, a devil-may-care decision made to look like her choice even though we who have read or listened to this story know better. Not long after this, it all goes terribly, torturously wrong.

Podcasts have become hot mines for content development, and “Dirty John” was always a natural to make the transition from page to audio to screen. Maybe Goffard had that hunch, even before the podcast was downloaded more than 30 million times. The florid language used to recreate scenes and develop characters in his articles creates a vivid enough picture for creator Alexandra Cunningham (whose pedigree includes "Desperate Housewives") and director Jeffrey Reiner to emulate. That they do, nearly to the letter, in the three episodes made available for review — to the benefit and detriment of the series. The first episode, by the way, is currently available on video on demand, and streaming on YouTube and Bravo's website.

"Dirty John" is the sort of love-turned-deadly take that spurred an entire murder mystery industry and provided the backbone for an entire channel's movie library years before true crime came into vogue. Readers and listeners loved "Dirty John" in part because it follows the genre's established pattern. The eponymous character is a muscular flirt who says all the right things and anticipates the needs of his mark. One montage early in their courtship shows John's princely doting taking the form of waking the woman he pretends to love a different flavor of homemade smoothie every day: blueberry one day, kale the next. With a hint of turmeric! Merely one drop in an ocean of California dreaming.

But these romantic gestures mask the warning signs and deceptions piling up, and the protestations of Debra's children, portrayed as coddled adults who have witnessed their mother be blinded by bad choices in the past. To her, their vocal disapproval of John is an example of crying wolf, only this time the wolf, along with his hungry drug addiction and teeth, are real and dangerous.

And their story ends with a fight for survival reminiscent of a horror movie. Goffard could not have made up the accidental brilliance of the fact that Debra’s daughter Terra ("Ozark" alum Julia Garner) owes her survival to her devotion to “The Walking Dead." Only in studying a fictional apocalypse on TV was she able to emerge from a deadly confrontation alive and victorious, and provide a stupendous made-for-TV ending.

The Bravo of it all — forgive the shorthand, but hopefully you get what I mean — is the ostentatious glint of the Newells' lifestyle and the sheer audaciousness of Meehan’s con. This is a homicide parable set in “Real Housewives of Orange County” country. If Bravo weren’t doing it, it would be airing on Lifetime.

Lifetime may yet do its own version. Who knows?

The point is, "Dirty John" doesn't hold any creative surprises for those familiar with the case, and it doesn't break any conventions amply established by, say, Investigation Discovery or Oxygen. That doesn't make it worthless, mind you.  It has all the makings of a frivolous, ephemeral good time, a spiky bauble made to stand out among television's soft December offerings.

This might read like a pan or a warning to anyone who was drawn in by Goffard’s reporting or the podcast, which is basically the audiobook version of the story. It’s not the former, and only slightly the latter if you’re expecting the adaptation to live up to the artistic quality of the source material. In that case, prepare to be underwhelmed.

But if you've been looking for an excuse to tap that box of pink wine lurking in the back of your fridge and hoot and gasp at your TV screen, happy holidays.

What I’m saying is, adjust your expectations accordingly. This isn’t a top-shelf a “based on a true story” work but an eight-part drama that almost directly follows the format of the newspaper series but nevertheless cannot help but suffer dilution by way of dramatization.

As is true with most sweets, consuming "Dirty John" requires overlooking a bit of reality, namely the fact that the people he menaced are still with us. On the other hand, two key real-life players walked the red carpet in support of the series, so maybe don't torture yourself on that front too much.

One also must accept that a few details that made Goffard's telling sing are dropped in the translation. Terra’s “Walking Dead” obsession is key to the story and adds a strange cosmic poetry to its payoff, but in the TV adaptation that’s downgraded to a non-brand specific zombie apocalypse. Which is a very different proposition.

And you may take issue with Garner's interpretation of Terra. Her squeaky mouse voice announces a presumed passivity, as if to compensate for the loss of that "Walking Dead" reference so we can find a new shock in the ending. Temple, meanwhile, is so distractingly bitchy that one envisions her portrayal being recreated for a “RuPaul’s Drag Race” challenge. That's only a problem for viewers coming to “Dirty John” with high viewing standards. To anyone cocooned in a throw and working on their night cheese, her work is a vampy delight.

Indeed, with so many viewers knowing how “Dirty John” evolves and ends, much of the weight falls upon the stars to keep us interested.

Britton performs her role with empathy and spark — when doesn't she? — and it’s slightly devastating to see her face crumble when she discovers the hideous, violent truth behind the dream weaver to whom she's legally bound herself. And it helps to have some awareness of Meehan's nastiness while watching Bana play out the early stages of their courtship. Over their first dates he lightly salts his romantic gestures with a touch of the sinister, providing a bit too much detail about his made-up backstory in his conversations with Debra. When darker questions arise, watch Bana's jaw — it seizes, ever so slightly, as he coos a defensive explanation to highly suspicious circumstances. Fortunately he doesn't have to play it subtle for very long. By the third episode the nightmare scenario is in blossom, told in scenes that intersperse Debra's awakening in the present with the ex-wife he conned, then threatened, in  the past.

Unclear at this point is whether "Dirty John" can sustain the tantalizing and terror over eight episodes without padding the plot. Goffard's story works because it achieved a firm balance between detail and precision. The opening episodes render the story almost exactly as Goffard wrote it, and that's fine. But Goffard wrote six chapters. I'm curious to know what aspects of those parts are worthy of elaboration and how successful the series will pull that off.

Is Bravo's "Dirty John" necessary? Essential? No, but what made-to-TV true crime scare piece is? Surely there’s an answer to that, even if this thriller is not it. But it works as a lightweight crime yarn at a time of year awash in holly and ivy sentiment that, like fresh snow on a still-warm earth, is celebrated before melting away, forgotten. Taking the other options on the schedule into account, this limited series is the sort of proposition that absolutely makes sense at the time. You know, kind of like an expertly designed grift.