Turkeys: Who are they, and why should we care?

Turkeys are intelligent, sensitive animals. But on factory farms, their lives are painful and short 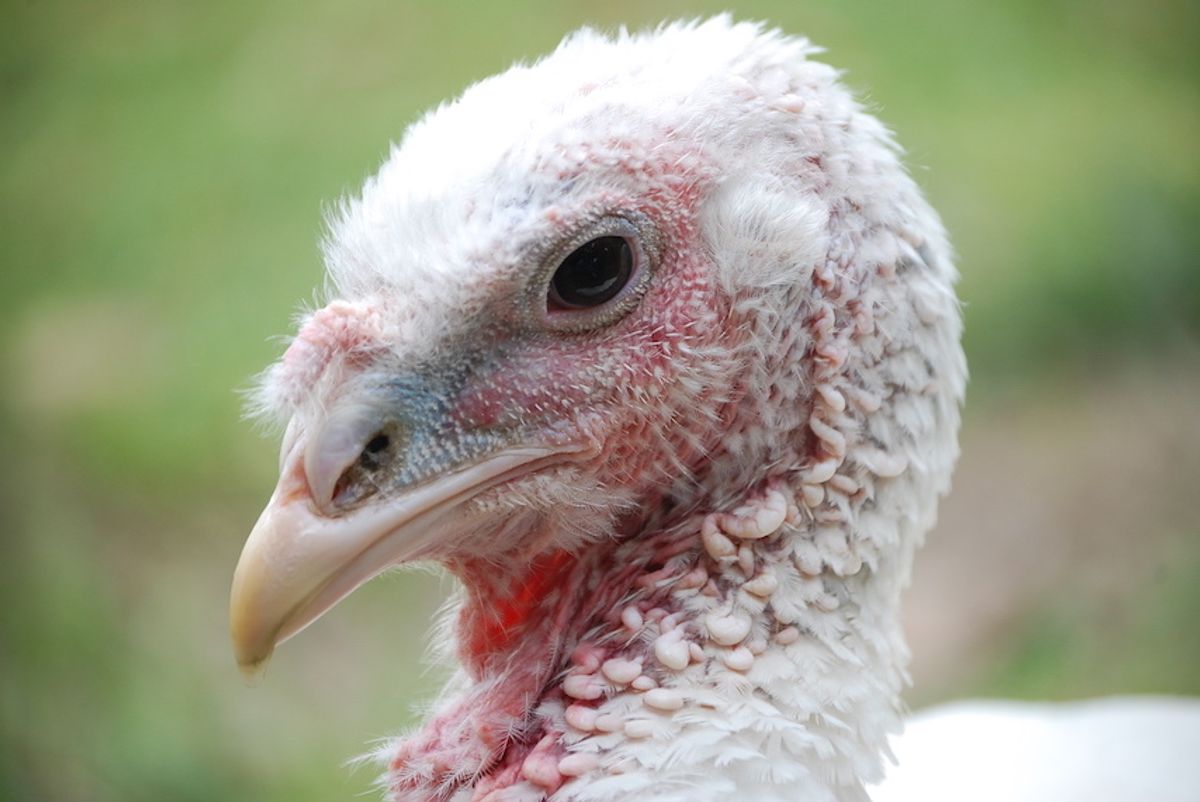 This article was produced by Earth | Food | Life, a project of the Independent Media Institute, and originally published on EcoWatch.

We adopted Amelia as a young turkey into our sanctuary from a local farmer. She lived with us for five years until her legs gave out, and we had to call our veterinarian to put her to rest, surrounded by her friends in the yard. Until then she hung out happily with the chickens and ducks, and when people visited, she’d fan out her white tail feathers and stroll amiably beside them.

Amelia chose a leafy spot to lay her eggs, and there she would sit quietly in the spring and early summer. She loved being outside with the ducks in the evenings, poking around until the last glimmer of sinking sunlight. At last, she and they would amble into their house and join the chickens who were already perched for the night.

I believe Amelia would have made a wonderful mother, but our sanctuary policy does not allow bringing new birds into the world from which ours is a refuge. That said, it helps to know that turkeys are excellent mothers and that in nature, the young birds, known as poults, stay close to her for nearly half a year. When the maternal family is on the move and one poult peeps his or her distress, the mother bird clucks reassuringly, and if the peeping persists, she rushes to comfort her little one.

When her poults grow tired and cold, they tell her so, and she crouches to warm and comfort them under her great, enveloping wings. If, when traveling as a unit through the woods and fields, a youngster happens to stray, intent on his own pursuit, on discovering that he is alone, the poult straightens up, looks keenly about, listens intently, and calls anxiously to his mother. Biologists call this a “lost call” — the call of the frightened young turkey upon perceiving that he is alone. When the mother bird answers her errant youngster’s searching cry, he calls back to her in relief, opens up his wings, flaps them joyfully and runs to rejoin his family.

In nature, baby turkeys start talking to their mother while they are still inside their eggs nestled with their brothers and sisters in the deep warmth of her feathers. They know her, her voice and each other long before they hatch. Whenever I think of turkeys in the mechanical incubators and the beak-mutilation “servicing” rooms, and all the horrors that follow, I imagine the lost calls of all the turkeys that will never be answered. For them, there will never be a joyous flapping of wings or a family reunited and on the move in the wooded places they so love to explore.

Sanctuary workers like myself who’ve come to know turkeys bred for the meat industry know that these birds have not lost their ancestral desire to perch, mate, walk, run and be sociable — and even to swim. We know that their inability to mate properly does not result from a loss of desire to do so, but from human-caused disabilities, including the fact that their claws and much of their beaks were cut off or burned off at the hatchery, making it hard for them to hold on to anything. Like Amelia, they’re susceptible to painful degenerative leg disorders that limit their spontaneous activity and cause them to age long before their natural 15-year lifespan.

Turkeys are emotional birds whose moods can be seen in their demeanor and in the pulsing colors of their faces, which turn blue, purple or red depending on what they are feeling. An emotional behavior in turkeys is the “great wake” a group will hold over a fallen companion in the natural world and on factory farms. When, as frequently happens on factory farms, a bird has a convulsive heart attack, several others will surround their dead companion and suddenly die themselves, suggesting a sensibility toward one another that should awaken us to how terribly we treat them, and make us stop.

Observers have marveled at the great speed of sound transplantation from one bird to another within a flock at a moment’s danger, and the pronounced degree of simultaneous gobbling of adult male turkeys in proximity to one another. One bird having begun, the others follow him so quickly that the human ear cannot figure which bird launched the chorus or caused it to cease.

Turkeys love to play and have fun. In his book "Illumination in the Flatwoods: A Season with the Wild Turkey," naturalist Joe Hutto describes how on August mornings his 3-month-old turkeys, on seeing him, would drop down from their roosting limbs where they had sat “softly chattering” in the dawn, “stretch their wings and do their strange little dance, a joyful happy dance, expressing an exuberance.”

A witness who chanced upon an evening dance of adult turkeys wrote of hearing them calling. No, he said, they were not calling strayed members of their flock. They were just having “a twilight frolic before going to roost. They kept dashing at one another in mock anger, stridently calling all the while. ... Their notes were bold and clear.”

For about five minutes, according to this witness, the turkeys “played on the brown pine-straw floor of the forest, then as if at a signal, they assumed a sudden stealth and stole off in the glimmering shadows.”

We once had two female turkeys in our sanctuary, Mila and Priscilla. Though the same age of a few months old, they were very different from each other. Mila was calm and gentle, whereas Priscilla was moody with emotional burdens, including anger. When Priscilla got into her angry mood, her head pulsed purple colors and her yelps sounded a warning as she glared at my husband and me with combat in her demeanor, ready to charge and perhaps bite us.

What stopped her was Mila. Perking up her head at the signals, Mila would enter directly into the path between Priscilla and us, and block her. She would tread back and forth in front of Priscilla, uttering soft pleading yelps as if beseeching her not to charge. Sure enough, Priscilla would gradually calm down in response to the peacemaker’s inhibiting signals.

Turkeys come into the nation’s consciousness as caricatures and corpses at Thanksgiving, and then they’re forgotten until the next year rolls around. Yet turkeys are being slaughtered every single day of the year, much more often than for Thanksgiving alone, for which around 45 million birdswill perish. For thousands of turkeys — 242.5 million were slaughtered in 2017 in the United States, according to the National Turkey Federation — every single day is “Thanksgiving,” a never-ending harvest of horror.

Instead of calling Thanksgiving “Turkey Day,” let’s make it a turkey-free day and show our thanks by making peace with our feathered friends.

Karen Davis, Ph.D. is the president and founder of United Poultry Concerns, a nonprofit organization and sanctuary for chickens in Virginia that promotes the compassionate and respectful treatment of domestic fowl.Karen is the author of More Than A Meal: The Turkey in History, Myth, Ritual, and Reality, Prisoned Chickens, Poisoned Eggs: An Inside Look at the Modern Poultry Industry, and The Holocaust and the Henmaid’s Tale: A Case for Comparing Atrocities. She has been inducted into the National Animal Rights Hall of Fame for Outstanding Contributions to Animal Liberation.