Let Bezos fend for himself and forgive student debt instead 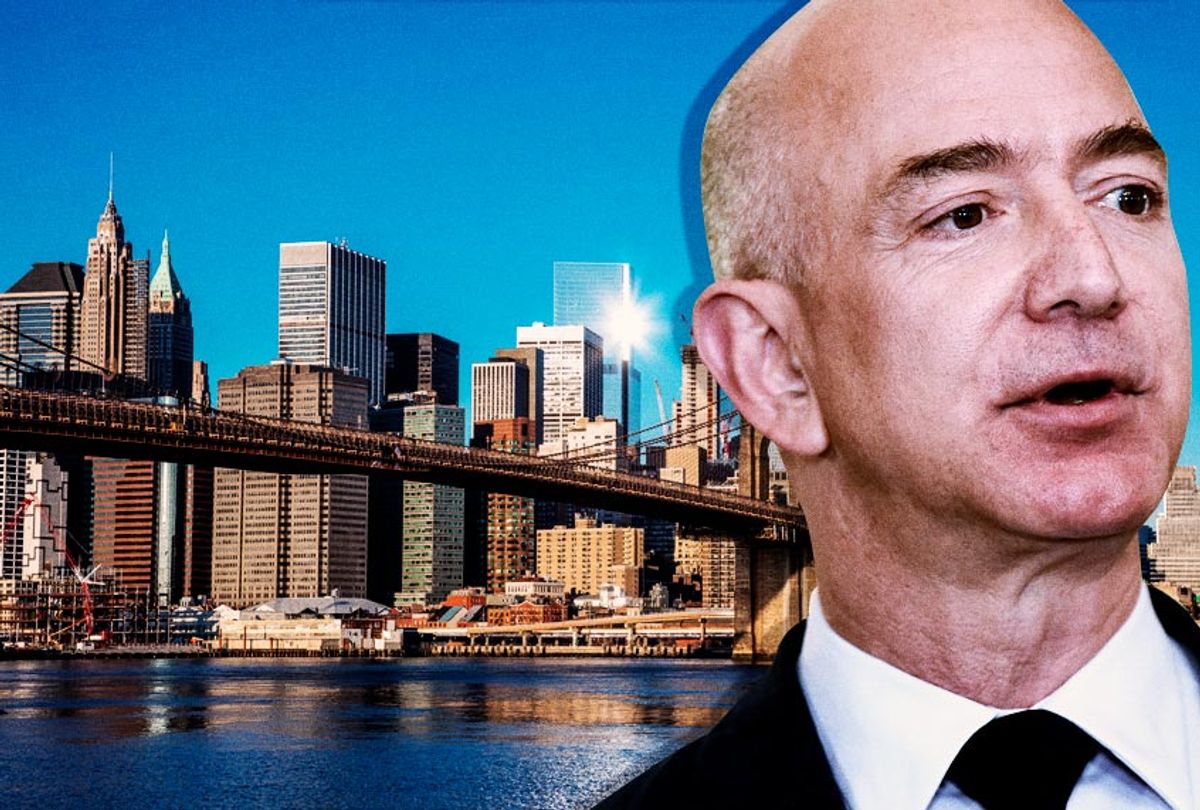 What is so disappointing about Governor Andrew Cuomo and Mayor Bill de Blasio’s rush to kiss Amazon’s ring in hopes of landing tens of thousands of good paying jobs is that these two so-called progressives with national ambition have such a paucity of imagination.

All they’ve got is the tired old play of rewarding a trillion dollar behemoth like Amazon with billions in grants and subsidies that the corporate giant has coerced through what is euphemistically described as the ‘competition’ between dueling jurisdictions, aka, the race to the bottom.

Before New York City swallowed the whole Amazon ‘miracle’ hook, line and sinker, Los Angeles Times columnist Michael Hilzik did all the beauty pageant contestants the favor of going over the small print of the Amazon request for proposal.

“Please provide a summary of total incentives offered for the Project by the state/province and local community,” instructed Amazon. “Please provide a brief description of the incentive item, the timing of incentive payment/realization, and a calculation of the incentive amount. . . . If any of the programs or incentives described in the summary of total incentives are uncertain or not guaranteed, please explain the factors that contribute to such uncertainty. . . . Please also describe any applicable claw backs or recapture provisions required for each incentive item.”

Hilzik described the Amazon approach as “arrogant, naive and a teensy bit cynical” but “most important of all” the company was “signaling the expectation of public handouts. In other words, while creating the need for vast public investment in infrastructure, the company wants to reduce the resources available to make the investment."

But Amazon’s hardball approach has gotten results, according to Good Jobs First, a non-profit that maintains a web page dedicated to Amazon’s state and local economic development subsidy deals for its warehouses, data centers, and film productions, as well as to its subsidiaries such as Whole Foods Supermarket, Zappos and Audible.

Amazon has bagged over $1.61 billion in its platinum cup from close to half the states in the union to seed close to 160 projects. Those empty mom pop brick and mortar stores and the old schools Sears chains had no idea the fix was in off with their own tax dollars!

“For each subsidized project, we include: year awarded, state and city or county, estimated subsidy cost and the type of facility,” Good Jobs First writes. “Since our exposé, we have encountered greater secrecy surrounding tax-break packages awarded to Amazon. This sometimes makes calculating such costs difficult. Secret project names, non-disclosure agreements, and a reluctance by public officials to fully disclose costs — even after a deal has been awarded — suggests Amazon and public officials know these deals have become controversial.”

Both Cuomo and de Blasio are like luxury hotel concierges to the captains of global capital like Amazon’s Jeff Bezos. As constant campaign cash sponges, they both have perfected the high transactional art of eliciting millions in contributions while keeping themselves out of criminal jeopardy even as some former donors and intermediaries are not so lucky and fall into the abyss.

They both lament about the vast wealth disparity and income gap that now defines  an America’s socio-economic landscape where future generations’ economic advancement, beyond their parents level of attainment, is less likely than it is for their peers in China. But the Amazon deal is nothing new. It is ‘to the victor goes the spoils’ and those he lets stand nearest him at the ribbon cutting.

Meanwhile, shackled by $1.5 trillion in student debt, a generation of young Americans are putting off getting married, having children even forming their own household.

Thank goodness for the up and coming crop of young newly elected progressives close enough to the college debt strangled struggle of their peers to actually want to through them a real-life line.

Consider the idea floated by New York State Assembly Member Ron Kim and State Senator-elect Jessica Ramos, who both who come from Queens, after it was announced the borough was slated to host Amazon HQ2. They have floated a People Over Corporations Agenda, which proposes to redirect the New York State and New York City Amazon package to forgive some of the the state’s $80 billion in student debt.

“It’s painfully obvious that from the moment that my colleagues signed on the letter in 2017, welcoming Amazon into New York City, Amazon already knew they wanted to come to our city and were focused on gaining the most favorable incentive package,” Kim said in a statement. “I am calling on the Senate, Assembly, and City Council to conduct joint hearings in support of the [POCAgenda] and on everything linked to the LIC Amazon deal.

“We are paying the company to price ourselves out of our own communities,” said Ramos.  “When we’ve demanded our subway system be fixed, our schools be fully funded, and affordable housing built, we’ve been told time and again that there is no money. And now, having the opportunity to broaden our tax base, government has chosen to dole out tax breaks and incentives. Malarkey. Stop giving the people’s money to corporations and invest that money back into the people,” said Ramos. “Forgiving student debt and giving nearly three million New Yorkers, like me, our freedom back will spur real community development, not displacement.”

The time for this radical realignment is upon us.