It's not a rover, but a parked robot — yet InSight still has plenty to study from its stationary position 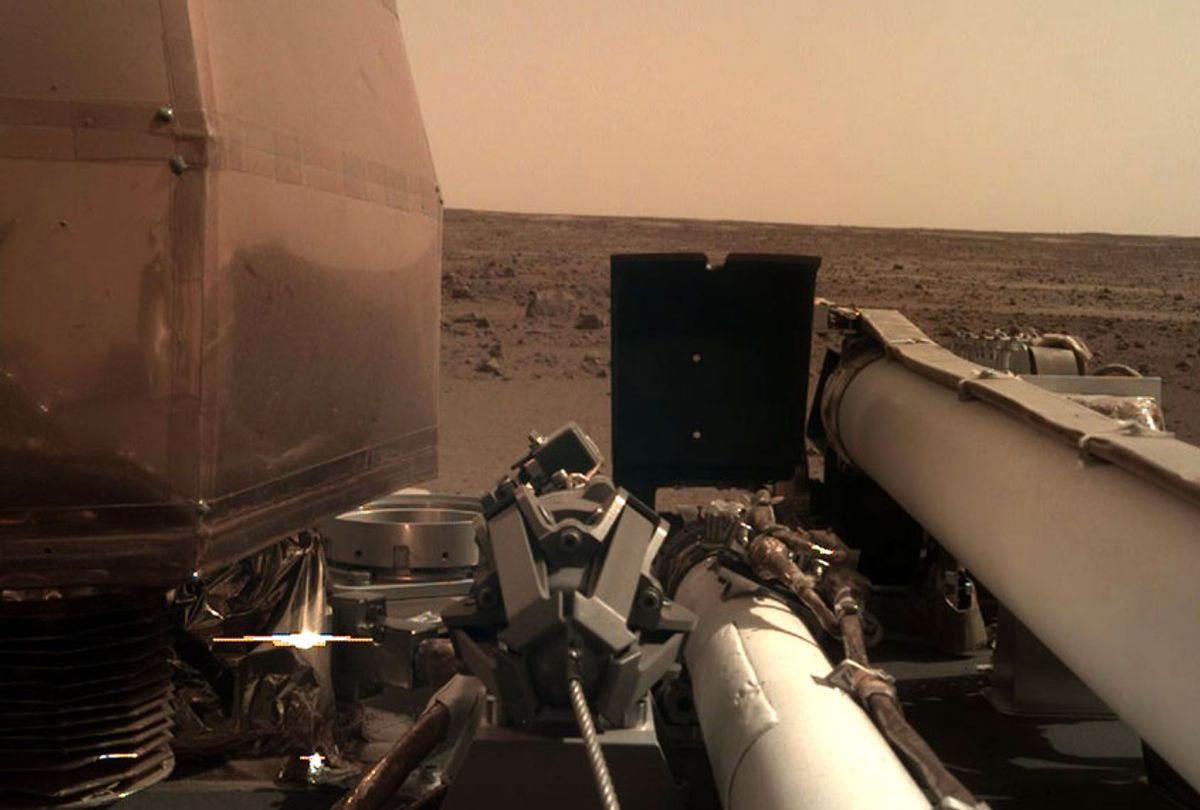 The Instrument Deployment Camera (IDC), located on the robotic arm of NASA's InSight lander, took this picture of the Martian surface on Nov. 26, 2018, the same day the spacecraft touched down on the Red Planet. (NASA/JPL-Caltech)
--

On Monday, the robot population of Mars increased by one: NASA's InSight probe, a concatenation of "Interior Exploration using Seismic Investigations." The robotic probe’s nail-biting landing — the first successful Mars landing in six years — was perhaps the most dangerous part of its mission; numerous previous Martian probes have failed upon crash-landing, including the last one sent there, the European Space Agency's Schiaparelli Lander.

Headlines around the world celebrated the achievement. But with that out of the way, the casual, non-scientist reader may be asking: what is InSight actually doing on Mars?

As it turns out, InSight has a busy schedule over the next two years. According to NASA, its mission is partly geologic, as its tools will help understand Mars' crust and mantle; ultimately, the lander's science will help contribute to an overall picture of the history of the solar system, and how Mars, Earth and the other planets formed and evolved.

"InSight will study the interior of Mars and will teach us valuable science as we prepare to send astronauts to the Moon and later to Mars,” said NASA Administrator Jim Bridenstine in a statement. “The best of NASA is yet to come, and it is coming soon."

In true indefatigable robotic form, InSight has not wasted time resting since landing. As of Tuesday, the probe had already sent a couple photos of its desolate landscape, putting scientists on Earth to work.

It’s a good sign that scientists on Earth are receiving information from InSight after its landing, as this means that its solar panels are collecting sunlight on the Martian surface.

"Landing was thrilling, but I'm looking forward to the drilling," InSight principal investigator Bruce Banerdt of JPL said in statement right after the landing. "When the first images come down, our engineering and science teams will hit the ground running, beginning to plan where to deploy our science instruments. Within two or three months, the arm will deploy the mission's main science instruments, the Seismic Experiment for Interior Structure (SEIS) and Heat Flow and Physical Properties Package (HP3) instruments."

The seismometer will listen for “marsquakes” — meaning earthquakes, but, well, on Mars rather than Earth. The HP3 will burrow nearly 16 feet into the ground, and will help scientists get a better understanding of how much heat is flowing out of the body of the planet. In other words, it is going to take Mars’ vital signs.

“This helps scientists determine whether Mars formed from the same stuff as Earth and the Moon, and gives them a sneak peek into how the planet evolved,” NASA explains.

Both instruments won’t be officially deployed for another few weeks, as InSight's robotic arm unstows itself. In the meantime, data collection will continue with the help of RISE, the Rotation and Interior Structure Experiment.

As NASA explains: “InSight will take the first three weeks or so after landing to really get to know its new home. On its first day on Mars, the cameras on the lander deck and the arm will both take photos with their transparent lens covers on. Both cameras will take images with the lens cover off within their first week on Mars. These images will give the team back on Earth a quick look at the terrain of InSight's landing location.”

The images will inform scientists on where to best place the heat probe and seismometer.

InSight launched from Vandenberg Air Force Base in California on May 5, 2018.