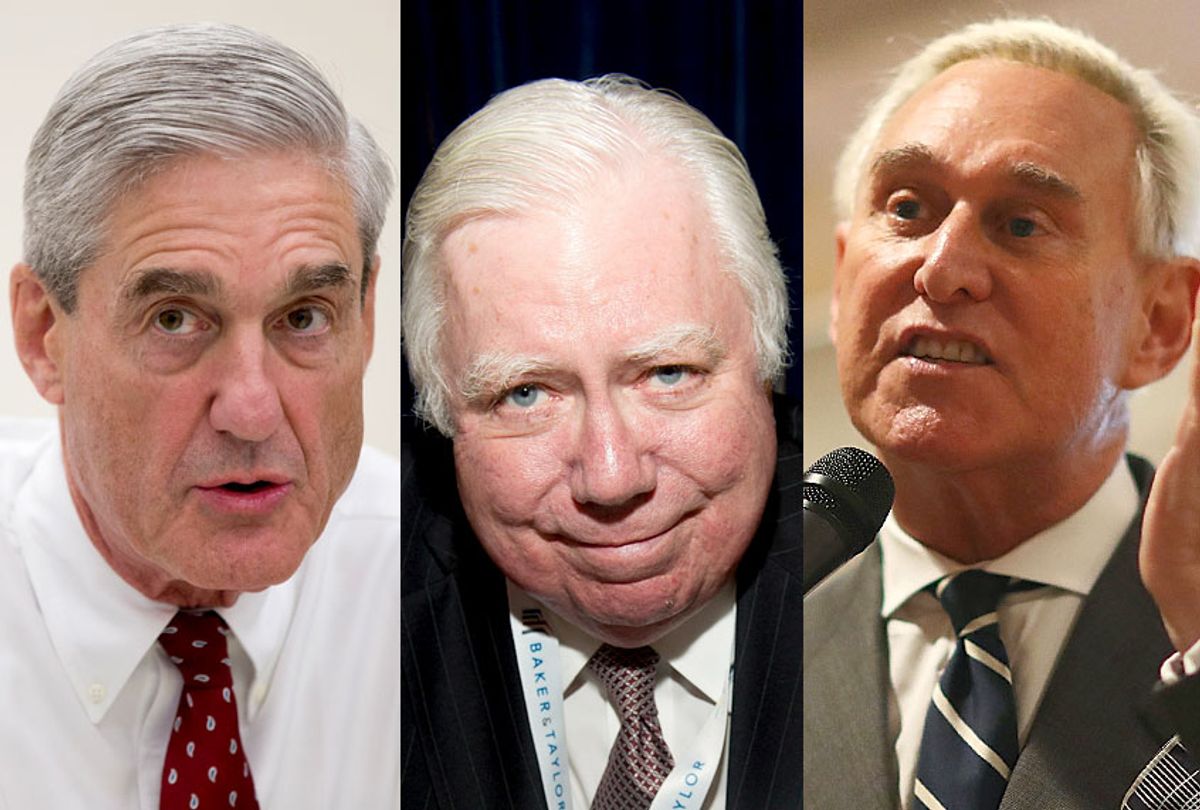 Jerome Corsi, the right-wing conspiracy theorist and notorious Obama "birther," notified former Trump campaign adviser Roger Stone in an email that WikiLeaks was planning to release a trove of emails stolen from Hillary Clinton's presidential campaign ahead of the 2016 election, according to multiple reports.

The email was revealed in a draft court document sent to Corsi by Robert Mueller, the special prosecutor investigating allegations of collusion between the Trump's 2016 presidential campaign and Russia. The document reportedly details exchanges between Corsi and Stone, and signals that Mueller is increasingly scrutinizing whether Corsi acted as an intermediary between Stone and WikiLeaks.

"Word is friend in embassy plans 2 more dumps," Corsi reportedly wrote on Aug. 2, 2016, referring to WikiLeaks founder Julian Assange. "One shortly after I'm back. 2nd in Oct. Impact planned to be very damaging."

The documents also claim that Stone told Corsi to get in touch with Assange about the forthcoming email dump.

"Get to (Assange) [a]t Ecuadorian Embassy in London and get the pending (WikiLeaks) emails," reads the email to Corsi dated July 25, 2016, according to the draft court documents.

The whistleblower site made two separate email dumps during the heated 2016 race that altered the trajectory of the presidential election. Mueller has indicted 12 Russian intelligence officers in a sustained effort to hack the computer networks of the Democratic National Committee, Hillary Clinton's presidential campaign and the Democratic Congressional Campaign Committee in the weeks ahead of the 2016 election. The damaging emails were released by WikiLeaks.

Corsi, who has appeared before the special counsel's grand jury, revealed on Monday that he received an offer from Mueller for a plea deal on one count of lying to federal investigators – and he plans to reject it. He has maintained his innocence and said the special counsel "can put me in prison for the rest of my life. I am not going to lie."

Earlier this month, Corsi said that he expected to be indicted for "giving false information to the special counsel or to one of the other grand jury."

Corsi has previously insisted that, to the "best of [his] knowledge," he had no contact with WikiLeaks founder Julian Assange and that "investigators were so mad, because I didn't give them what they wanted."

NBC News reports that the interviews began on Sept. 6. At the time, Corsi reportedly told investigators that Stone asked him in the summer of 2016 to get in touch with WikiLeaks about unreleased materials relevant to the presidential campaign. Corsi said he turned down the request and told Stone that an effort to contact WikiLeaks could put them in a questionable spot with investigators.

Mueller's team, however, has said Corsi did not decline the request and that he instead passed it along to conservative author Ted Malloch, who is based in London. Eight days later, Corsi reportedly send the email to Stone, saying that WikiLeaks obtained information that would be damaging to Hillary Clinton's presidential campaign and planned to publish it in October.

"Time to let more than (Clinton campaign chairman John Podesta) to be exposed as in bed w enemy if they are not ready to drop HRC (Hillary Rodham Clinton)," Corsi reportedly wrote in the email dated Aug. 2, 2016. "That appears to be the game hackers are now about."

Corsi has maintained that he had no direct or indirect communications with WikiLeaks. He claims he anticipated WikiLeaks' release of the hacked emails by "connecting the dots" between public statements from Assange and other available materials.

"Why did I think they were coming out in October? Because I said to myself, 'If I had these emails, I'd use them as the October surprise,'" Corsi told NBC News on Tuesday. "And why did I think they would come out serially, drip by drip? Because Assange is very strategic. He understands the news cycle."

Stone, meanwhile, has adamantly denied any wrongdoing regarding WikiLeaks' releases during the 2016 presidential campaign, and said Tuesday that the newly-released emails don't suggest otherwise.

"None of these emails provide any evidence or proof that I knew in advance about the source or content of any of the allegedly stolen or allegedly hacked emails published by WikiLeaks," Stone said. "Since when did gossip become a criminal offense? Where is the WikiLeaks collaboration? Where is the evidence that I received anything whatsoever from WikiLeaks and passed it on to Donald Trump? These emails prove nothing other than the fact that Jerry Corsi is an aggressive investigative reporter."