Obama is "obsessed with taking credit for another guy's, Trump’s, success" 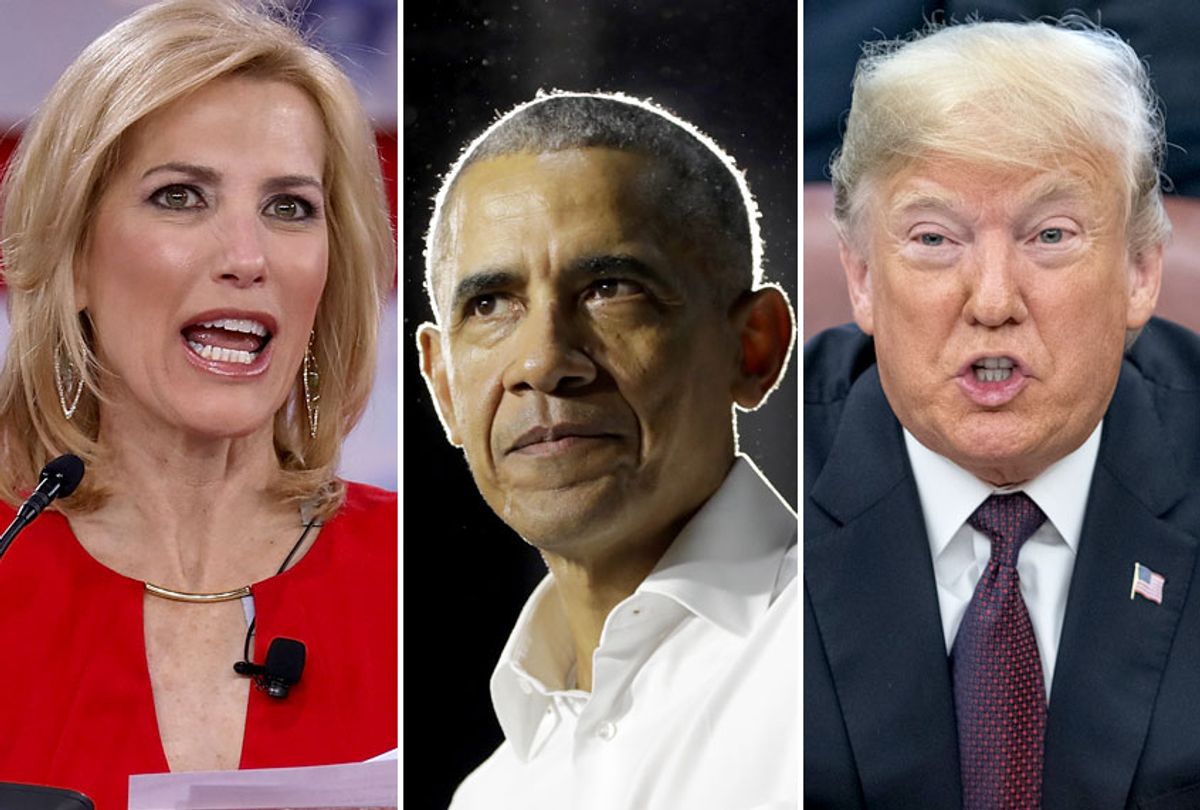 On Wednesday night, Fox News host, Laura Ingraham had some strong words for former President Barack Obama stating from the top of the segment: “The Obama’s left the White House almost two years ago, can you believe it? But they don’t want you to forget how awesome they were, sorry!”

“The Ingraham Angle” host criticized a speech Obama gave at the Rice University Baker Institute in Texas on Tuesday night. The president talked about a number of issues, namely, the credit President Trump is taking for the current success of the decreasing unemployment rate.

“He came off as a man who is obsessed with himself,” Ingraham said. “And obsessed with taking credit for another guy's, Trump’s, success.” A clip is shown of Obama discussing how the energy production increased every year he was in office, much to the audience’s applause.

“The difference between the two president’s economic records is stark,” Ingraham claimed, using a Wall Street Journal op-ed by former Trump campaign adviser Andy Pudzer titled “Trump Kicked the Sluggish Economy in High Gear” as a means to back up her claims. Ingraham cited from the article to claim that the “GDP growth staggered along 1.5 percent in Mr. Obama’s final six quarters in office but doubled to 3 percent in Trump’s first three quarters,” adding that “the increase in job openings over Mr. Trump’s first 21 months has averaged an impressive 75,000 a month, but during the last 21 months of the Obama administration there was job growth of 900 jobs per month.”

“It wasn’t until President Trump took office that the economy surged. His administration’s pro-business policies—cutting taxes, slashing regulations and encouraging energy production—released the pent-up dynamism of American capitalism. The result is a rising tide that is lifting boats across every class and region of the country.”

However, this point holds much contention among economists. Austan Goosbee explained on MSNBC, "At best, you would say it's been a continuation of a steady trend.” He argued that Obama’s economic strategy after the 2008 recession helped the Trump administration.

But Ingraham’s critique of Obama did not end there. “Obama’s pathetic attempt to take credit for the fruit of his successor's policies,” she continued. “While Obama criticizes most of those very same policies, it’s just patently ridiculous!”

But it was Obama’s mentioning of an increasingly polarized media landscape that truly sent the Fox News host reeling.

“As a Fox viewer you have an entirely different reality than if you’re a New York Times reader,” Obama said to his Texas audience.

“Oh yeah, it’s entirely different,” Ingraham responded. “We see the world as it is. The New York Times, like some other networks, sells their own version of reality. Obama is pining away for that bygone era when liberals dominated all media platforms.”

Some could view this opinion as hypocritical for Fox News is often seen as a biased right-wing source. According to Business Insider, Fox News was deemed the most biased news sources by Democrats or left-leaning individuals, whereas Republicans and right-leaning individuals saw it as the least biased.

“We actually saw Trump’s win coming,” Ingraham stated confidently to the camera and stated that the liberals or “elites” failed to see Trump’s win because like Obama, liberals live in an echo chamber of liberal idealism where opinions are not challenged by another side.

“Obama has no respect for any American who doesn’t think like he does,” Ingraham said. Watch below: